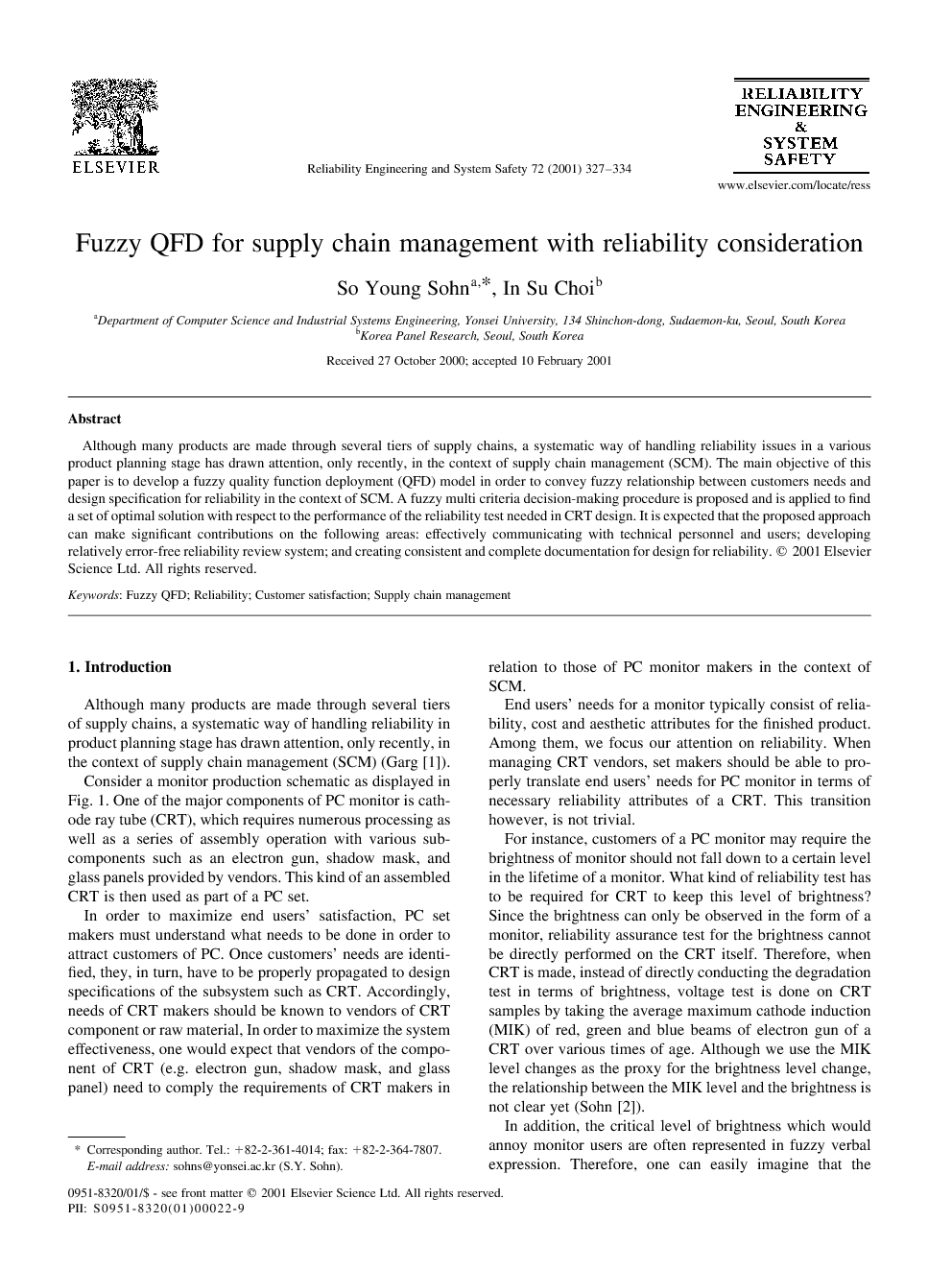 Although many products are made through several tiers of supply chains, a systematic way of handling reliability issues in a various product planning stage has drawn attention, only recently, in the context of supply chain management (SCM). The main objective of this paper is to develop a fuzzy quality function deployment (QFD) model in order to convey fuzzy relationship between customers needs and design specification for reliability in the context of SCM. A fuzzy multi criteria decision-making procedure is proposed and is applied to find a set of optimal solution with respect to the performance of the reliability test needed in CRT design. It is expected that the proposed approach can make significant contributions on the following areas: effectively communicating with technical personnel and users; developing relatively error-free reliability review system; and creating consistent and complete documentation for design for reliability.

Although many products are made through several tiers of supply chains, a systematic way of handling reliability in product planning stage has drawn attention, only recently, in the context of supply chain management (SCM) (Garg [1]). Consider a monitor production schematic as displayed in Fig. 1. One of the major components of PC monitor is cathode ray tube (CRT), which requires numerous processing as well as a series of assembly operation with various subcomponents such as an electron gun, shadow mask, and glass panels provided by vendors. This kind of an assembled CRT is then used as part of a PC set.In order to maximize end users' satisfaction, PC set makers must understand what needs to be done in order to attract customers of PC. Once customers' needs are identified, they, in turn, have to be properly propagated to design specifications of the subsystem such as CRT. Accordingly, needs of CRT makers should be known to vendors of CRT component or raw material, In order to maximize the system effectiveness, one would expect that vendors of the component of CRT (e.g. electron gun, shadow mask, and glass panel) need to comply the requirements of CRT makers in relation to those of PC monitor makers in the context of SCM. End users' needs for a monitor typically consist of reliability, cost and aesthetic attributes for the finished product. Among them, we focus our attention on reliability. When managing CRT vendors, set makers should be able to properly translate end users' needs for PC monitor in terms of necessary reliability attributes of a CRT. This transition however, is not trivial. For instance, customers of a PC monitor may require the brightness of monitor should not fall down to a certain level in the lifetime of a monitor. What kind of reliability test has to be required for CRT to keep this level of brightness? Since the brightness can only be observed in the form of a monitor, reliability assurance test for the brightness cannot be directly performed on the CRT itself. Therefore, when CRT is made, instead of directly conducting the degradation test in terms of brightness, voltage test is done on CRT samples by taking the average maximum cathode induction (MIK) of red, green and blue beams of electron gun of a CRT over various times of age. Although we use the MIK level changes as the proxy for the brightness level change, the relationship between the MIK level and the brightness is not clear yet (Sohn [2]). In addition, the critical level of brightness which would annoy monitor users are often represented in fuzzy verbal expression. Therefore, one can easily imagine that the required relationship for the reliability attributes between the CRT and the components of CRT would be fuzzy in many places. This is just a simple example where many relationships in SCM could be fuzzy. Therefore, in SCM, it is important to define customers and their fuzzy needs properly at every chain. Consequently, customers' fuzzy needs have to be identified in relation to design specification as well.Quality function deployment (QFD) is often used to understand customers' needs on the product and to relate them with design specifications through several hierarchies of house of quality (HOQ). Defining customers and their needs at each stage is not relatively difficult compared to reflecting recursively both fuzzy needs and relationship in several HOQs. Fuzzy QFD has been developed mainly in view of fuzzy relationship between the customers' needs and design specifications (Khoo and Ho [3]). However, not much research has been done to deal with fuzzy customers' needs for reliability tests in the context of the SCM. The main objective of this paper is to develop a fuzzy QFD model in order to convey fuzzy relationship between supply chains in terms of multi-attribute reliability requirements. A fuzzy multi criteria decision making procedure is proposed and is expected to make significant contributions on the following areas: effectively communicating with technical personnel and users; developing relatively error-free reliability review system; and creating consistent and complete documentation for design for reliability. Organization of this paper is as follows. In Section 2, QFD studies are reviewed. In Section 3, a fuzzy multi criteria decision making procedure is illustrated. We then, in Section 4, apply fuzzy QFD to finding design specifications for reliability in the context of SCM. In Section 5, study results are summarized.

SCM is an important issue to be considered in the customer relation management. We deal with a sequential manufacturing process for electronic product in terms of supply chains connecting the vendor of raw material, assembly manufacturer, and the set maker. The main issue focused was to find the proper levels of reliability test performance, which can satisfy various fuzzy requirements of end uses and the relationship between customers' needs and design variables in each supply chain. In this paper, we used the hierarchies of QFD to systematically relate customers' needs with design variables in each supply chain of product development process. We then recursively consider those relationships so that end users' requirement can be identified as functions of reliability test performance variables in the last chain of the product design process. Next, we proposed a fuzzy multi criteria decision-making procedure to find a set of optimal solution with respect to the reliability performance needed. This optimization procedure can be easily extended to other types of models by accommodating various fuzzy optimization approaches including a gamma operator. Although the model was developed with our application in mind, it can be used to perform a host of various levels of fairly general supply chains. We expect that our approach can make significant contributions on resolving reliability issues in SCM context, which has scarcely been considered previously.