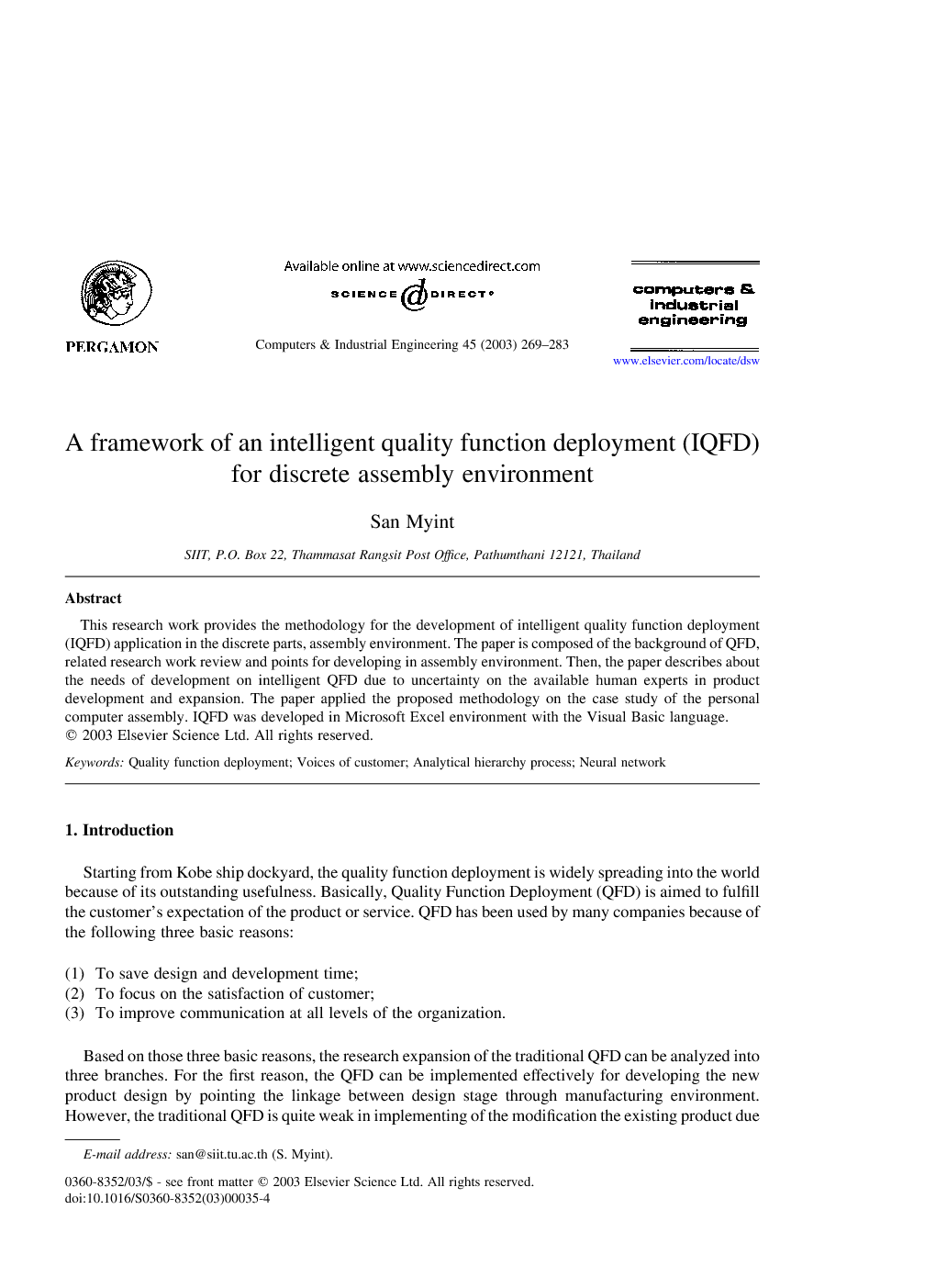 This research work provides the methodology for the development of intelligent quality function deployment (IQFD) application in the discrete parts, assembly environment. The paper is composed of the background of QFD, related research work review and points for developing in assembly environment. Then, the paper describes about the needs of development on intelligent QFD due to uncertainty on the available human experts in product development and expansion. The paper applied the proposed methodology on the case study of the personal computer assembly. IQFD was developed in Microsoft Excel environment with the Visual Basic language.

Starting from Kobe ship dockyard, the quality function deployment is widely spreading into the world because of its outstanding usefulness. Basically, Quality Function Deployment (QFD) is aimed to fulfill the customer's expectation of the product or service. QFD has been used by many companies because of the following three basic reasons: (1) To save design and development time; (2) To focus on the satisfaction of customer; (3) To improve communication at all levels of the organization. Based on those three basic reasons, the research expansion of the traditional QFD can be analyzed into three branches. For the first reason, the QFD can be implemented effectively for developing the new product design by pointing the linkage between design stage through manufacturing environment. However, the traditional QFD is quite weak in implementing of the modification the existing product due to lack of human experts. In real application of QFD, the human experts are needed to provide the relationship on each matrix of QFD implementation. But, the life of the human expert, sometimes, could not last long enough with the product development. In addition, the human expert who involved in the initial development of QFD might not stay long enough with the company. In those cases, the company that used QFD efficiently met the problem of the lacking of human experts or historical product design development. Therefore, it is necessary to keep track of the product development history to shorten the product and design development. For the second reason, many researchers are currently focused on the development of many approaches and some are known as ‘voice of customers’ (Krishnaswamy & Elshennawy, 1992) and ‘Blitz QFD’ (Zultner, 1995) for prioritizing the customer needs. At that point, Cohen (1995) also stated in his QFD book that it is necessary to prioritize the customer needs based on market analysis. He compared between the prioritization matrix method and analytical hierarchy process method and also provided advantages and disadvantages of each method. Despite its invaluable contribution to the field of product manufacturing and design, it does have its feebleness. First, QFD has neglected to take into consideration the priority among customer requirements. Some customer attributes may be felt, or actually are, having greater or lower priority than others. QFD does not prioritize the attributes in any of its procedures. Consequently, inconsistency in the result would be inevitable. Fortunately, Saaty (1990) has done a research in using Analytical Hierarchy Process (AHP) in prioritizing customer requirements in QFD. Second, conventional QFD procedures have embedded in itself a tendency for subjective valuation of the weight in the relational matrix of House of Quality (HOQ). This might cause bias in the outcome and vary the actual result. For the third reason, QFD is well organized for improving the communication inside the organization if it is correctly implemented (Krishnaswamy & Elshennawy, 1992). On the other hands, the improvement of the personal computer power and internet communication derive to develop computerized QFD (Trappey, Trappey, & Hwang, 1996) and decision support system of QFD (Moskowitz & Kim, 1997). Therefore, this research is focused on above mentioned three reasons and the implementation trends of QFD. It can be concluded that QFD needs to be computerized for better communication by using Internet facilities; the computerized QFD needs to possess the memory for remembering the past histories of the product development; QFD should be the decision support tool for making right decision. Based on above conclusions, this research proposed to develop the intelligent QFD with the help of neural network (NN) facilities and implemented into the computerized environment.

The proposed IQFD method is implemented in the computerized environment by using MS Office 97–Excel, Visual Basic and Neural Solutions Software. Based on the case study of the PC assembly, the proposed method of IQFD is working well and thus, the project is extending to handle adding, removing of the attributes or the customer needs for neural network and sensitivity analysis to justify the possible changing of the weights of needs.