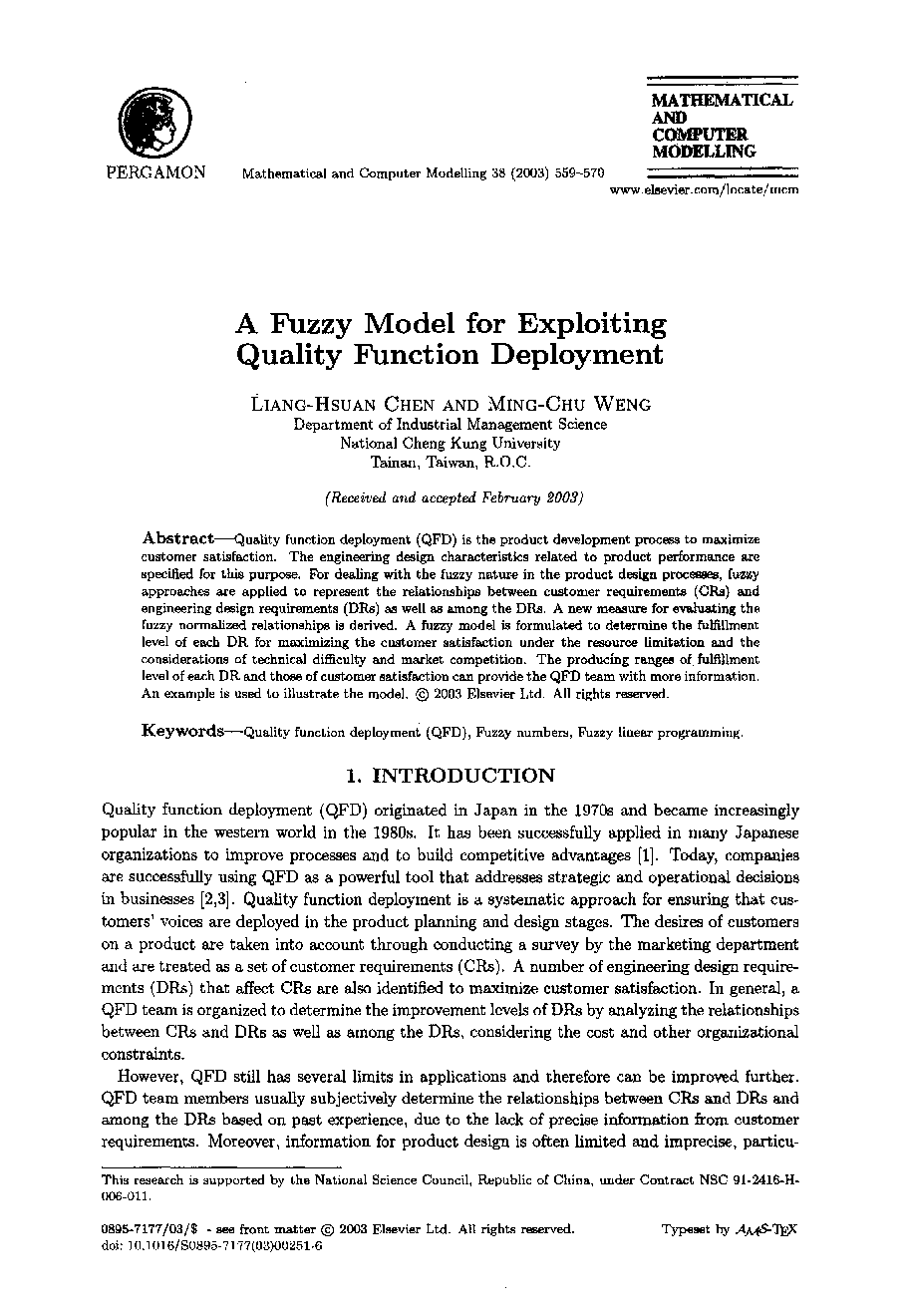 Quality function deployment (QFD) is the product development process to maximize customer satisfaction. The engineering design characteristics related to product performance are specified for this purpose. For dealing with the fuzzy nature in the product design processes, fuzzy approaches are applied to represent the relationships between customer requirements (CRs) and engineering design requirements (DRs) as well as among the DRs. A new measure for evaluating the fuzzy normalized relationships is derived. A fuzzy model is formulated to determine the fulfillment level of each DR for maximizing the customer satisfaction under the resource limitation and the considerations of technical difficulty and market competition. The producing ranges of fulfillment level of each DR and those of customer satisfaction can provide the QFD team with more information. An example is used to illustrate the model.

Quality function deployment (QFD) originated in Japan in the 1970s and became increasingly popular in the western world in the 1980s. It has been successfully applied in many Japanese organizations to improve processes and to build competitive advantages [l]. Today, companies are successfully using QFD as a powerful tool that addresses strategic and operational decisions in businesses [2,3]. Quality function deployment is a systematic approach for ensuring that customers’ voices are deployed in the product planning and design stages. The desires of customers on a product are taken into account, through conducting a survey by the marketing department and are treated as a set of customer requirements (CRs). A number of engineering design requirements (DRs) that affect CRs are also identified to maximize customer satisfaction. In general, a QFD team is organized to determine the improvement levels of DRs by analyzing the relationships between CRs and DRs as well as among the DRs, considering the cost and other organizational constraints. However, QFD still has several limits in applications and therefore can be improved further. QFD team members usually subjectively determine the relationships between CRs and DRs and among the DRs based on past experience, due to the lack of precise information from customer requirements. Moreover, information for product design is often limited and imprecise, particu-larly when developing an entirely new product, such that engineers usually do not have complete knowledge about the impacts of engineering characteristics on customer requirements (CRs). These considerations have made the applications of some studies using crisp data restricted, such as Park and Kim [4] and Trappey et al. [S]. Instead, some researchers presented computeraided systems to aid engineers in designing engineering factors. Fung et ~2. [6] proposed a fuzzy customer requirement inference system in which the product attributes could be mapped out. Moskowitz and Kim [7] provided a decision support system for optimizing product designs. Temponi et al. [8] developed a reasoning scheme for inferring requirement relationships between CRs and DRs, as well as among the DRs. Nevertheless, the development of these systems usually requires professional knowledge and experiences to establish rules and facts in ensuring that the systems can work well. Some models are also formulated for determining the levels of engineering design requirements based on fuzzy set theory. Kim et al. [9] proposed a fuzzy theoretical modeling approach to QFD by formulating fuzzy multiobjective models, assuming that the function relationships between CRs and DRs and that among the DRs can be identified using benchmarking data of customer competitive analysis. But it would be difficult, particularly when developing an entirely new product. Some researchers ever developed fuzzy approaches to address complex and often imprecise problems in customer requirement management by applying fuzzy sets, fuzzy arithmetic, and/or fuzzy defuzzification techniques [lo-131. However, the interrelationships among the engineering characteristics were not properly incorporated in these models. Instead of the fuzzy approaches mentioned above, this study considers not only the inherent fuzziness in the relationships between CRs and DRs, but also those among DRs. Two kinds of fuzzy relationships are aggregated, based on Wasserman’s study [14], to obtain the fuzzy normalized relationship matrix in which each cell is represented by a fuzzy number. Unlike the existing approaches [15], we proposed new expressions for those fuzzy numbers to obtain more shortened o-cuts, such that fuzzy technical importance ratings for engineering design requirements can be determined in terms of o-cuts with less uncertainty. Under the resource limitation and the considerations of technical difficulty, and market competition, we then formulated a fuzzy LP model to determine the optimal fulfillment degrees of DRs at each o-cut for achieving the optimal customers’ satisfaction. An illustrative example is used to demonstrate the feasibility of the proposed approach. In the following section, a fuzzy normalized relationship matrix of QFD is introduced, and new expressions are derived for the o-cuts of each fuzzy relationship value. Fuzzy technical importance rating for each engineering design requirement at each cr-cut is then determined. Section 3 formulates the QFD planning problem as a fuzzy model to determine the fulfillment levels of DRs to produce the maximum customer satisfaction. An example is given to demonstrate our approach in Section 4. Finally, conclusions are provided in Section 5.

Extended models are proposed for aiding the QFD term in determining the fulfillment levels of DRs in the stage of product design by introducing the concept of fuzzy sets, due to the impreciseness of evaluating the relationships between CRs and DRs as well as among the DRs. A modified fuzzy normalization relationship measure is derived to obtain more meaningful representation of fuzzy technical importance ratings of DRs. Considering fuzzy cost parameters, business competition, and technical difficulty of elevating quality, a fuzzy model is formulated to determine the fulfillment level of each DR in order to obtain the maximum total customer satisfaction level at each possibility level. The membership function of fuzzy customer satisfa,ction is then determined. Unlike the existing QFD approaches, the proposed approach can allow the QFD team to assess the relationships between CRs and DRs as well as that among the DRs by linguistic terms for dealing with the uncertainty in the stage of product design. The fuzzy numbers are applied in the resolution processes. The possible ranges of the fulfillment levels of DRs and the resulting ranges of total custom satisfaction level can provide a QFD team with more useful information,