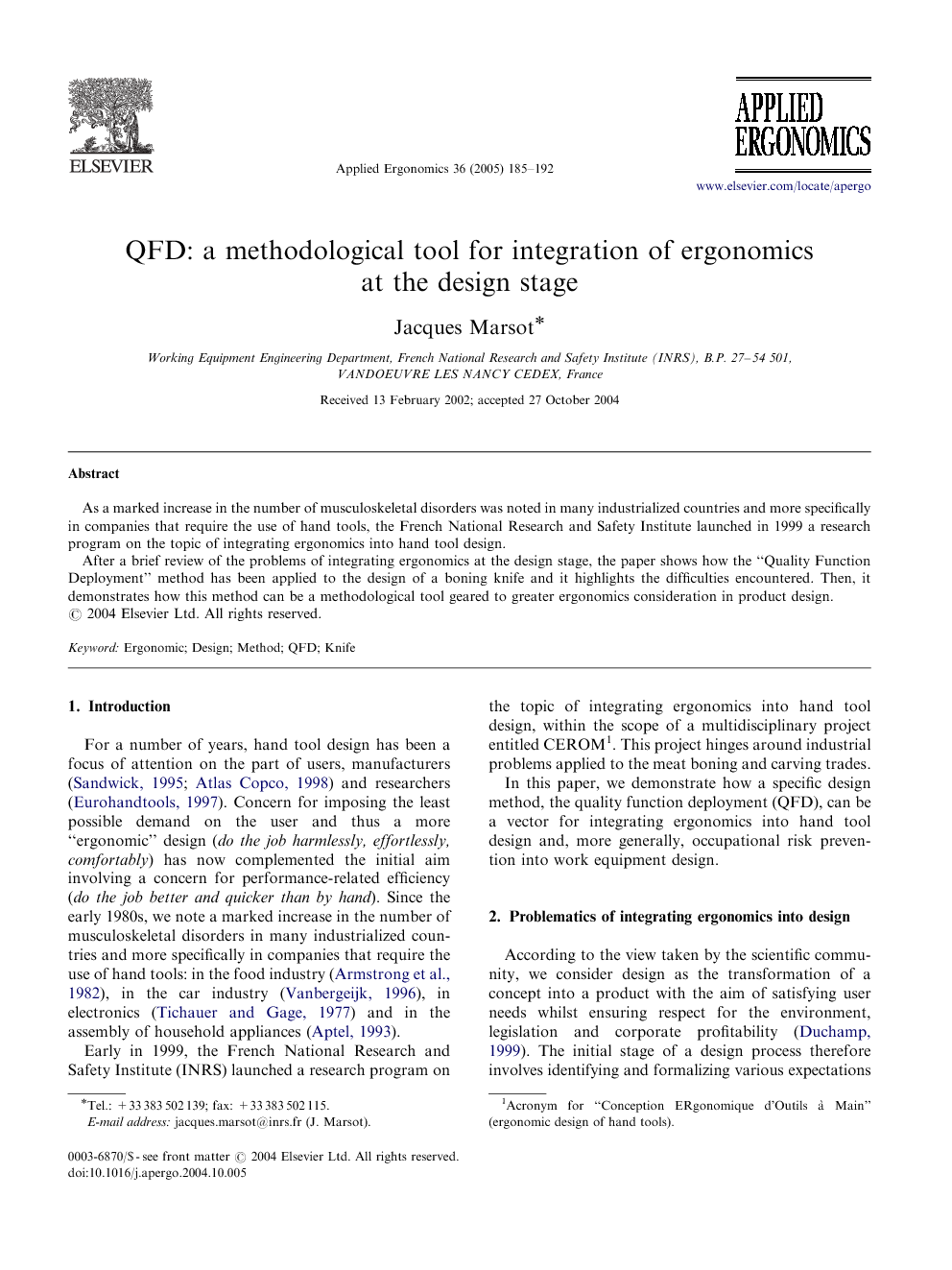 As a marked increase in the number of musculoskeletal disorders was noted in many industrialized countries and more specifically in companies that require the use of hand tools, the French National Research and Safety Institute launched in 1999 a research program on the topic of integrating ergonomics into hand tool design. After a brief review of the problems of integrating ergonomics at the design stage, the paper shows how the “Quality Function Deployment” method has been applied to the design of a boning knife and it highlights the difficulties encountered. Then, it demonstrates how this method can be a methodological tool geared to greater ergonomics consideration in product design.

For a number of years, hand tool design has been a focus of attention on the part of users, manufacturers (Sandwick, 1995; Atlas Copco, 1998) and researchers (Eurohandtools, 1997). Concern for imposing the least possible demand on the user and thus a more “ergonomic” design (do the job harmlessly, effortlessly, comfortably) has now complemented the initial aim involving a concern for performance-related efficiency (do the job better and quicker than by hand). Since the early 1980s, we note a marked increase in the number of musculoskeletal disorders in many industrialized countries and more specifically in companies that require the use of hand tools: in the food industry (Armstrong et al., 1982), in the car industry (Vanbergeijk, 1996), in electronics (Tichauer and Gage, 1977) and in the assembly of household appliances (Aptel, 1993). Early in 1999, the French National Research and Safety Institute (INRS) launched a research program on the topic of integrating ergonomics into hand tool design, within the scope of a multidisciplinary project entitled CEROM1. This project hinges around industrial problems applied to the meat boning and carving trades. In this paper, we demonstrate how a specific design method, the quality function deployment (QFD), can be a vector for integrating ergonomics into hand tool design and, more generally, occupational risk prevention into work equipment design.

The validity of the QFD method for linking customer expectations and product definition is increasingly recognized today and it can be asserted that this methodological tool is indeed capable of providing a solution to the problems of integrating ergonomics into product design (Haapalainen et al., 2000). Starting from an activity analysis, inside the work team the ergonomist will be in a position to: • integrate ergonomics-related expectations into the “Whats” list • take part in drawing up the “Hows” list by integrating the necessary ergonomics criteria • contribute to obtain a consensus decision within the group for the various degrees of correlation for expectations and/or ergonomics criteria • identify possible contradictions between these ergonomics criteria and other design parameters (“the HoQ roof”) • identify the solution concept from those proposed that best responds to ergonomics-related expectations • anticipate the consequences of modifying a specific design parameter on ergonomics-related expectations. Furthermore, by ensuring a visual grouping of all effective data for decision-making in relation to product design, QFD matrices can be considered as common frames of reference encouraging communication between different design players. As a result, the QFD method integrates perfectly into a concurent engineering approach (Tsuda, 1995; Sivaloganathan et al., 1995). This concept, which appeared in the 1980s with the main aim of reducing new product development time, is recognized today as an organizational system encouraging the integration of ergonomics into design (Jouffroy et al., 1998; Roussel, 1996). Moreover, the HoQ can be recognized as a graphical model of the product allowing validation by all actors involved in the needs expression and specification stages (Fig. 5). It plays a similar role to digital models and/or prototypes in an iterative design process which was also called “ergonomic development process” (Laprie, 1996).Finally, we should stress that recent research work (Terninko, 1998; Wu, 1997; Leon and Aguayo, 1998; Martin and Bocquet, 1999) is attempting to integrate QFD into a logical sequence of methodological tools to thereby make formalization of the overall design process possible. Drawing up QFD matrices does, nevertheless, raise certain difficulties. The main one involves the creation of enormous matrices, which subsequently become unusable, with a view to being exhaustive. It is therefore very important to establish priorities for the elements to be deployed. For example, needs such as “Not cause pressure points” or “Not remain in a dangerous position when posed” appeared in early versions of the list “Whats” list. They were deleted because they are, in fact, ways of satisfying actual needs, which are not to cause pain or injury to the operator. A second difficulty is associated with manipulating the matrices combined with the need to keep them up to date. As a communication support, they must, in effect, be regularly updated or else they will quickly become obsolete. Use of computing tools is an effective aid in this field.