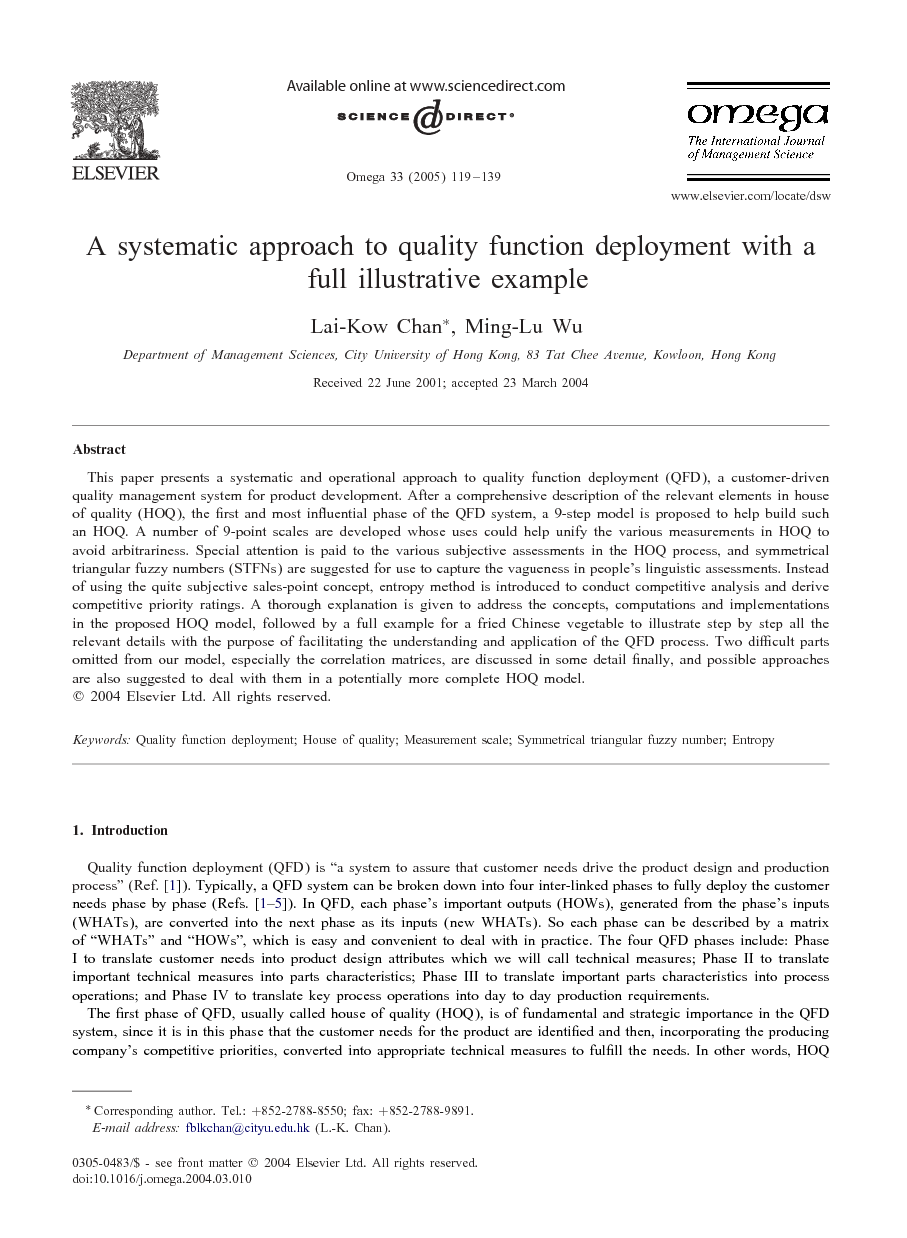 his paper presents a systematic and operational approach to quality function deployment (QFD), a customer-driven quality management system for product development. After a comprehensive description of the relevant elements in house of quality (HOQ), the first and most influential phase of the QFD system, a 9-step model is proposed to help build such an HOQ. A number of 9-point scales are developed whose uses could help unify the various measurements in HOQ to avoid arbitrariness. Special attention is paid to the various subjective assessments in the HOQ process, and symmetrical triangular fuzzy numbers (STFNs) are suggested for use to capture the vagueness in people's linguistic assessments. Instead of using the quite subjective sales-point concept, entropy method is introduced to conduct competitive analysis and derive competitive priority ratings. A thorough explanation is given to address the concepts, computations and implementations in the proposed HOQ model, followed by a full example for a fried Chinese vegetable to illustrate step by step all the relevant details with the purpose of facilitating the understanding and application of the QFD process. Two difficult parts omitted from our model, especially the correlation matrices, are discussed in some detail finally, and possible approaches are also suggested to deal with them in a potentially more complete HOQ model. K

Quality function deployment (QFD) is “a system to assure that customer needs drive the product design and production process” (Ref. [1]). Typically, a QFD system can be broken down into four inter-linked phases to fully deploy the customer needs phase by phase ([1], [2], [3], [4] and [5]). In QFD, each phase's important outputs (HOWs), generated from the phase's inputs (WHATs), are converted into the next phase as its inputs (new WHATs). So each phase can be described by a matrix of “WHATs” and “HOWs”, which is easy and convenient to deal with in practice. The four QFD phases include: Phase I to translate customer needs into product design attributes which we will call technical measures; Phase II to translate important technical measures into parts characteristics; Phase III to translate important parts characteristics into process operations; and Phase IV to translate key process operations into day to day production requirements. The first phase of QFD, usually called house of quality (HOQ), is of fundamental and strategic importance in the QFD system, since it is in this phase that the customer needs for the product are identified and then, incorporating the producing company's competitive priorities, converted into appropriate technical measures to fulfill the needs. In other words, HOQ links the “voice of the customer” to the “voice of the technician” through which process and production plans can be developed in the other phases of the QFD system. The structures and analyzing methods of the other three QFD phases are essentially the same as the first one, so we will study the HOQ phase only. In fact, most QFD studies focus mainly on its first phase (for exceptions, see [1], [3] and [5]). A house of quality (HOQ) involves the collection and analysis of the “voice of the customer” which includes the customer needs for a product, customers’ perceptions on the relative importance of these needs and the relative performance of the producing company and its main competitors on the needs. It also requires the generation and analysis of the “voice of the technician” which includes the technical measures converted from the customer needs, technicians’ evaluations on the relationship between each customer need and each technical measure, and the performance of the relevant companies in terms of these technical measures. With such a large amount of information to be collected and processed, building an HOQ may be too complex to be complete and comparable. Systematization of the HOQ process is thus a necessity. Many studies have been done ([1], [2], [3], [4], [5], [6], [7], [8] and [9]) and a number of QFD information systems have also been proposed (e.g., [10] and [11]) towards this purpose. However, most of these works are incomplete in the sense that either they do not contain all the important elements of HOQ or their quantifications are not very satisfactory. On the other hand, most information involved in the HOQ process is generated from human beings’ perceptions and linguistic assessments that are quite subjective and vague. Both the “voice of the customer” and the “voice of the technician” contain ambiguity and multiplicity of meaning. “Customer need #1 is very important”, “technical measure #2 has weak relationship with customer need #3” and “company #4 performs well on customer need #5” are examples of these “voices” which are imprecise in terms of breadth of meaning. Efforts should therefore be made to deal with the vagueness in these “voices” involved in the HOQ process. Among a few studies in this aspect, Khoo and Ho [12] provide a fuzzy QFD framework to perform QFD analysis using symmetrical triangular fuzzy numbers (STFNs). However, they exclude competitive analysis from their framework. Chan et al. [13] also use STFNs to analyze the “voice of the customer”, but their study does not involve the “voice of the technician”. This paper presents a systematic and operational approach to the QFD process. After a detailed description and analysis of the HOQ elements, we provide a 9-step process to build an HOQ. Then, we suggest some feasible methods on how to collect and analyze the information from both the customers and the technicians. We especially address the various “voices” in HOQ using symmetrical triangular fuzzy numbers (STFNs) and some of the proposed HOW steps are fuzzified to produce fuzzy results, which are generally more representative than traditional crisp approaches of using simple numbers. We also suggest the use of entropy method to perform competitive analyses and obtain competitive priority ratings for both customer needs and technical measures. A fried Chinese vegetable example is given to fully illustrate our approach. Two difficult parts omitted from our model—the probability factors for achieving the goals set for the HOWs and especially the correlation matrices among the WHATs and HOWs—are discussed in some detail finally, and possible approaches are also suggested to deal with them in a potentially more complete HOQ model.

n the literature, different authors build different house of quality (HOQ) models that contain different elements and employ different scales to measure the relevant concepts, which may puzzle the practitioners as which HOQ models should be used. This paper presents a systematic and operational approach to HOQ to help resolve this problem. We first give a comprehensive description of the relevant elements in HOQ. Then we propose a 9-step HOQ model to unify the HOQ process and a few 9-point scales to unify the measurements in HOQ to avoid arbitrariness and incomparability. We especially address the various “voices” in the HOQ process and suggest the use of symmetrical triangular fuzzy numbers (STFNs) to reflect the vagueness in people's linguistic assessments. Furthermore, since the commonly used sales point concept is quite subjective, we employ the quantitative entropy method to conduct competitive analysis and derive competitive priority ratings. All information required, computations involved and feasible methods are clearly indicated to give an applicable framework for practitioners to perform HOQ analysis without confusions and difficulties. To fully illustrate our proposed HOQ model, we present a fried Chinese vegetable example that involves 10 customer needs (WHATs), nine technical measures (HOWs) and five restaurants. Although many studies on QFD have been done and a lot of QFD applications have been reported (see Ref. [25] for a review), there are according to our knowledge few complete QFD cases or examples published. This causes problems for practitioners to apply the QFD technique to their product or service improvement processes. QFD is a complex and time-consuming process that involves many concepts to understand, much information to collect and many computations to perform. A complete and operational description of the QFD process will facilitate its wide applications, and a full example illustrating all the concepts, information collecting, computation and implementation steps will undoubtedly be helpful. Our paper, especially the example presented, is towards such a purpose. Our proposed 9-step HOQ model, although quite comprehensive and unified in nature, admittedly makes two major exclusions: one is the probability factors for achieving the goals for HOWs, another is the two correlation matrices of the WHATs and the HOWs. Since these two parts involve certain degrees of difficulties, they are omitted to make our model simpler and more operable. Of course, this does not mean they are unimportant for the QFD process. We discuss in some detail the problems associated with the two omitted parts, and also suggest some possible approaches to directly incorporate them into the relevant calculations within a potentially enlarged HOQ model. Further efforts in this aspect through sharing of research and application experiences are highly welcome to make the QFD process more complete.