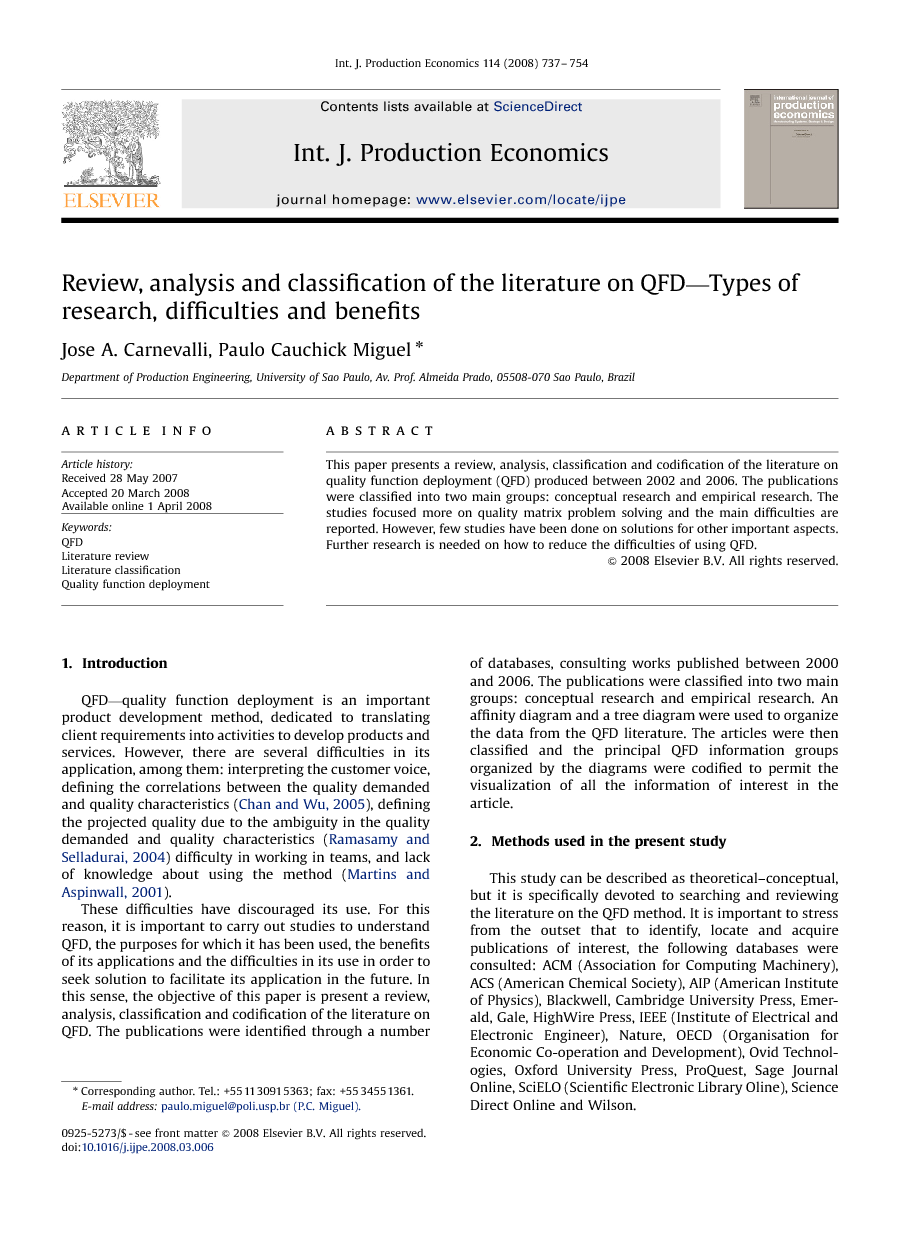 This paper presents a review, analysis, classification and codification of the literature on quality function deployment (QFD) produced between 2002 and 2006. The publications were classified into two main groups: conceptual research and empirical research. The studies focused more on quality matrix problem solving and the main difficulties are reported. However, few studies have been done on solutions for other important aspects. Further research is needed on how to reduce the difficulties of using QFD.

QFD—quality function deployment is an important product development method, dedicated to translating client requirements into activities to develop products and services. However, there are several difficulties in its application, among them: interpreting the customer voice, defining the correlations between the quality demanded and quality characteristics (Chan and Wu, 2005), defining the projected quality due to the ambiguity in the quality demanded and quality characteristics (Ramasamy and Selladurai, 2004) difficulty in working in teams, and lack of knowledge about using the method (Martins and Aspinwall, 2001). These difficulties have discouraged its use. For this reason, it is important to carry out studies to understand QFD, the purposes for which it has been used, the benefits of its applications and the difficulties in its use in order to seek solution to facilitate its application in the future. In this sense, the objective of this paper is present a review, analysis, classification and codification of the literature on QFD. The publications were identified through a number of databases, consulting works published between 2000 and 2006. The publications were classified into two main groups: conceptual research and empirical research. An affinity diagram and a tree diagram were used to organize the data from the QFD literature. The articles were then classified and the principal QFD information groups organized by the diagrams were codified to permit the visualization of all the information of interest in the article.

The identification of 157 articles on QFD, revealed that they were distributed over 74 different journals in the consulted database. More than 54% of the articles were distributed in 64 different journals. In several of these journals, only one article about QFD was found for the 7-year period. Even in the seven journals that published the most QFD articles, four published fewer than seven articles on this subject during this period. Thus, it is possible to conclude that there is a certain level of dispersion in the publication of the method. It can be concluded that the majority of cases studied are conceptual and descriptive and use mainly bibliographical data sources. In most of the cases, the work goals were about adapting QFD for a specific application. There are also several studies of intended improvements to the method that introduce other tools and techniques. However, in the great majority of the cases, applications are confined to the quality matrix (house of quality matrix), what may reduce the method's potential benefits. In the classification of the studies, there were difficulties in distinguishing “case study” from “action-research” in the category of empirical research, since in several articles there was limited information on the methods adopted and, in some cases there were problems with the authors’ statements. Some classified what was actually “action-research” as “case studies.” The lack of longitudinal case studies demonstrates the almost total lack of up-to-date information on how maturity in the use of QFD affects its application, showing the need to encourage this kind of study. The use of the affinity and tree diagrams was efficient in organizing and grouping bibliographical information on QFD, which can be consulted during the development of a systematic QFD application system, the next stage of this work. With these diagrams, it was observed that the most often cited tangible QFD benefits were related to project improvement, probably because they are those more often applied. It was possible not just to locate the main difficulties in QFD application, but also the solutions that were already in the literature. Additionally, it was observed that the studies focused more on quality matrix problem solving, which was to be expected, since the main difficulties are related to that matrix. However, few studies have been done on solutions for other important aspects, such as improving training for using the method to present methodologies that help to deal with engineering bottlenecks and costs aspects. The encoding of the research classification and main groups defined by diagram allowed a quick understanding of the main aspects of the articles studied, such as, for instance, the kind of study and approach, scope, QFD definitions, benefits and difficulties identified in the studies on the use of QFD. A promising approach is the use of fuzzy logic to perform most of the quality matrix stages, solving analysis and priority issues within these matrixes (as well as the use of AHP method with or without fuzzy logic). This aids the definition of the required degree of quality importance and helps to do the correlation of matrix data. Nevertheless, it is necessary to investigate whether these applications would make QFD still more complex, thus decreasing its use. Further work encompasses research in this direction, i.e. to reduce difficulties in the use of QFD.