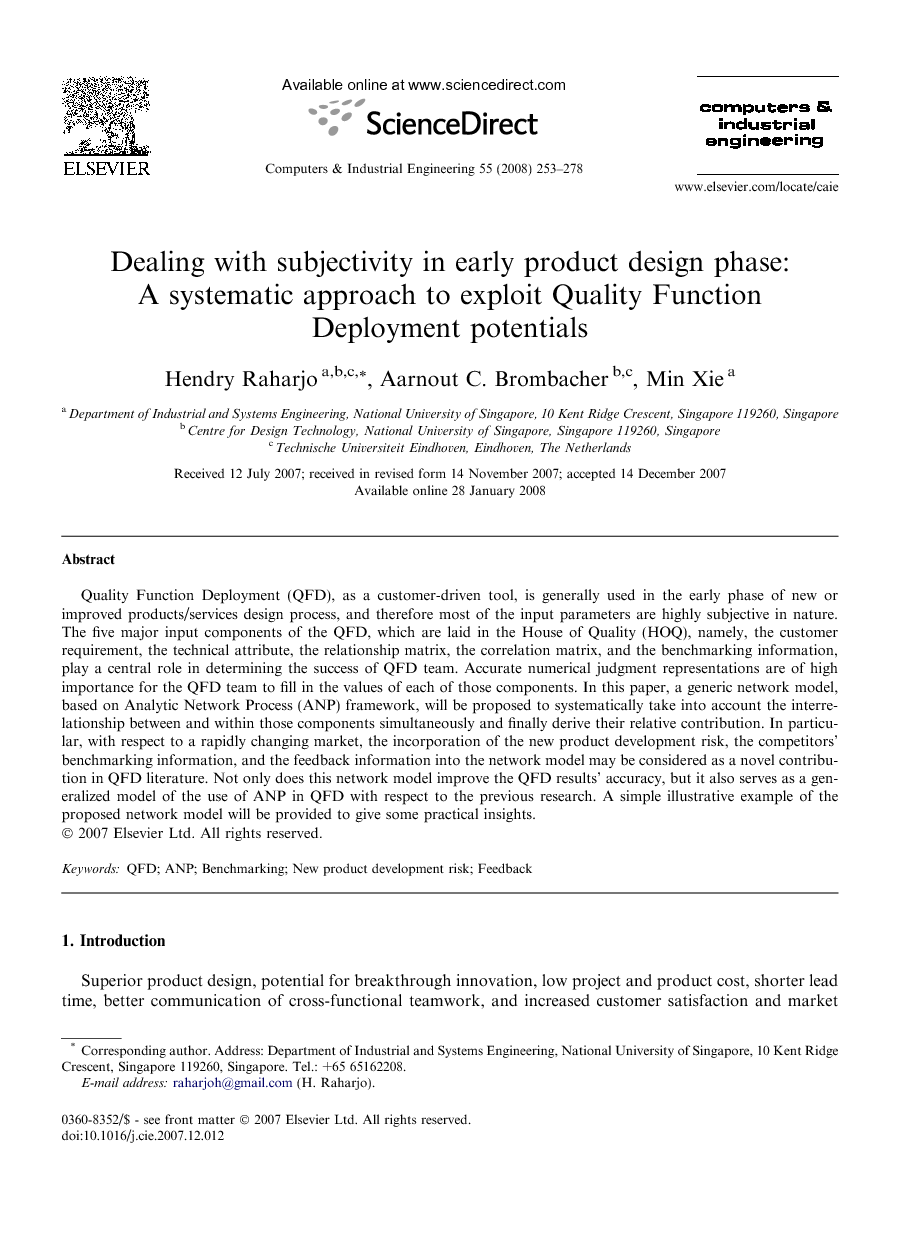 Quality Function Deployment (QFD), as a customer-driven tool, is generally used in the early phase of new or improved products/services design process, and therefore most of the input parameters are highly subjective in nature. The five major input components of the QFD, which are laid in the House of Quality (HOQ), namely, the customer requirement, the technical attribute, the relationship matrix, the correlation matrix, and the benchmarking information, play a central role in determining the success of QFD team. Accurate numerical judgment representations are of high importance for the QFD team to fill in the values of each of those components. In this paper, a generic network model, based on Analytic Network Process (ANP) framework, will be proposed to systematically take into account the interrelationship between and within those components simultaneously and finally derive their relative contribution. In particular, with respect to a rapidly changing market, the incorporation of the new product development risk, the competitors’ benchmarking information, and the feedback information into the network model may be considered as a novel contribution in QFD literature. Not only does this network model improve the QFD results’ accuracy, but it also serves as a generalized model of the use of ANP in QFD with respect to the previous research. A simple illustrative example of the proposed network model will be provided to give some practical insights.

The purpose of this paper, with respect to a constantly changing market, was to better deal with subjectivity in early product design phase by exploiting QFD potentials using the ANP approach. The main contribution of this paper lies in the proposed generic ANP-based network model which can be used to assist QFD practitioners in accurately quantify their subjective judgments and experience in a systematic fashion. Interestingly, not only can the network model address all elements in the HOQ, which may therefore serve as a substitutive procedure to the traditional QFD method, but it also takes into account other important factors in the product design context, such as the new product development risk. In general, the proposed network model has formally taken into account most of the crucial factors in new product design simultaneously. The relative contributions of each factor and their inner-action as well as interaction have been systematically incorporated. In particular, with respect to the existing QFD literature, the inclusion of the new product development risk, the competitors’ benchmarking information, and the feedback information into the network model, which is of considerable importance to new product development’s success, can be regarded as the novel contribution of this study. Thus, not only does this network model improve the QFD results’ accuracy, it also serves as a generalized model of the use of ANP in QFD from the previous research (Büyüközkan et al., 2004, Ertay et al., 2005, Kahraman et al., 2006, Karsak et al., 2002, Partovi, 2006, Partovi, 2007 and Pal et al., 2007). Some advantages of using the proposed network model may include the reduction of human judgment error, transparent evaluation, and improved efficiency. More importantly, the flexibility of the QFD in adapting to the constantly changing environment can be significantly improved as a sensitivity analysis to dynamically evaluate the network model can be carried out at any time. As with other ANP applications, a major possible drawback is the trade-off between the model complexity and the required time to complete the pairwise comparisons (Meade and Presley, 2002, Ravi et al., 2005, Sarkis and Sundarraj, 2006 and Shang et al., 2004). Nevertheless, when a substantial amount of risk, including financial risk, is involved, then a systematic and structured analysis of dealing with the problem can be fully justified. Note that the numerical outcomes of the method are less important than the systematic thinking environment it offers. With regard to the implementation and to avoid a too mechanistic application of the proposed network model, there are some points worth noting, as one of the authors learnt from the interview process with the design experts. First, the terms used in the questionnaire for each cluster in the model should be clearly explained, for example, what it means by ‘intuitiveness’ should be clearly defined beforehand (see Appendix A). Second, the meaning of Saaty’s fundamental scale used in the pairwise comparison for eliciting decision maker’s judgments should also be explained clearly (Appendix A). These two points are the most relevant operational difficulty that QFD team might encounter when using the model. In addition, the proposed network model can only be used for representing one House of Quality (HOQ), for example, in the illustrative example used in this paper, it is for representing the first HOQ. How this network model can be used for representing other HOQ, that is, the second, the third, and so forth remains a challenging topic for subsequent work. The proposed network model, to a certain extent, is also limited since it has not taken into account all possible factors. However, this also, at the same time, shows the versatility of the model, which allows further expansion to suit the condition of a particular company. In general, possible avenues for future work can be channeled in two directions, namely, the practical aspect and the theoretical aspect. From a practical standpoint, the incorporation of more real-world case studies to showcase the effectiveness of the proposed model would be a significant contribution. While from a theoretical standpoint, a comparison study of the proposed model’s effectiveness with other QFD methodologies remains an interesting area for future work.