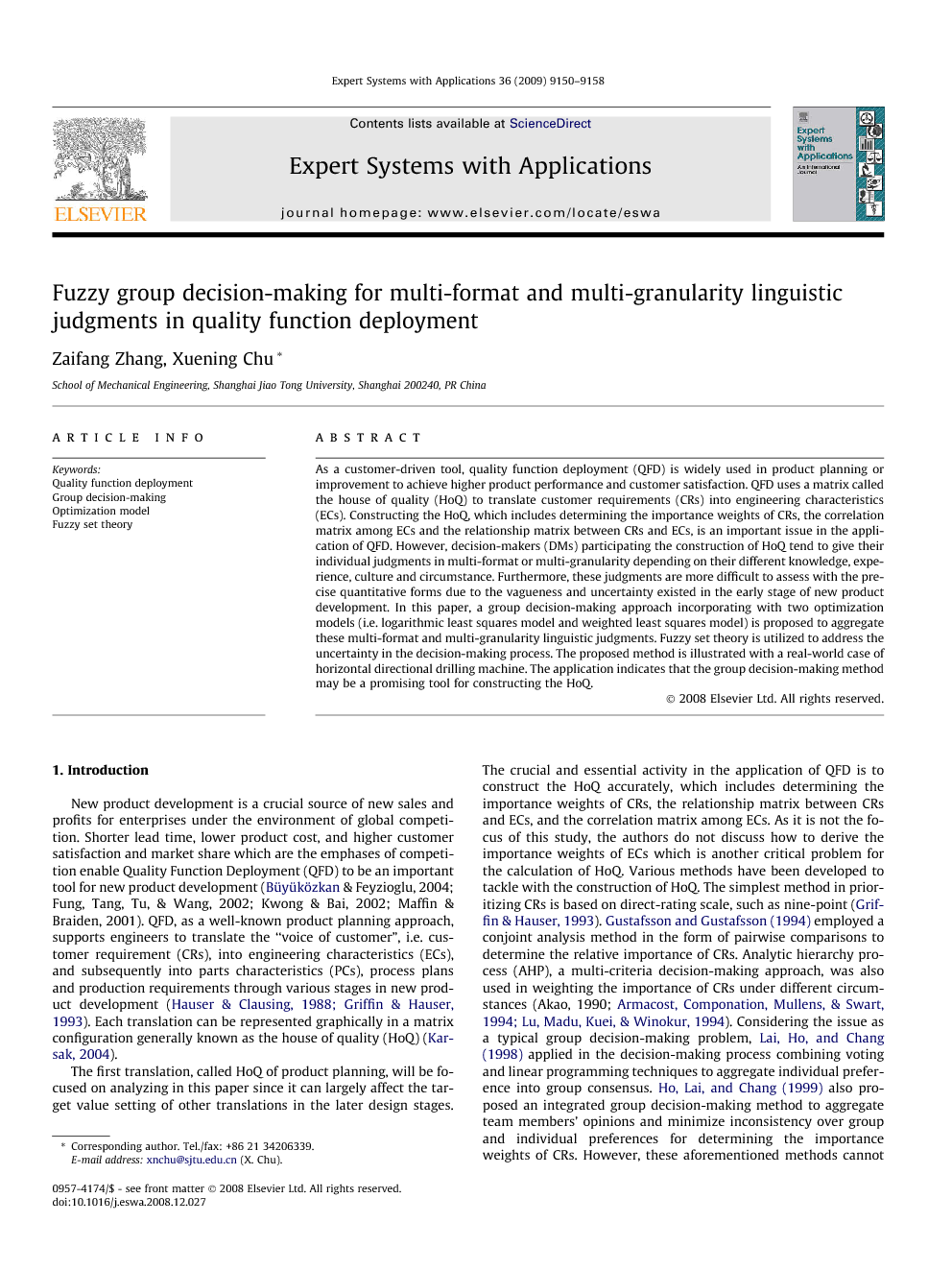 As a customer-driven tool, quality function deployment (QFD) is widely used in product planning or improvement to achieve higher product performance and customer satisfaction. QFD uses a matrix called the house of quality (HoQ) to translate customer requirements (CRs) into engineering characteristics (ECs). Constructing the HoQ, which includes determining the importance weights of CRs, the correlation matrix among ECs and the relationship matrix between CRs and ECs, is an important issue in the application of QFD. However, decision-makers (DMs) participating the construction of HoQ tend to give their individual judgments in multi-format or multi-granularity depending on their different knowledge, experience, culture and circumstance. Furthermore, these judgments are more difficult to assess with the precise quantitative forms due to the vagueness and uncertainty existed in the early stage of new product development. In this paper, a group decision-making approach incorporating with two optimization models (i.e. logarithmic least squares model and weighted least squares model) is proposed to aggregate these multi-format and multi-granularity linguistic judgments. Fuzzy set theory is utilized to address the uncertainty in the decision-making process. The proposed method is illustrated with a real-world case of horizontal directional drilling machine. The application indicates that the group decision-making method may be a promising tool for constructing the HoQ. Keywords

Constructing the HoQ of product planning is a fundamental problem in the application of QFD because it can largely affect the target value setting of ECs and also other translations in the following design stages. Due to the high degree of subjectivity and uncertainty in the decision-making process in constructing the HoQ, the application of fuzzy set theory provides an efficient to handle the subjective assessments. Participators tend to provide their opinions in many different ways with multi-granularity due to their personal backgrounds. To allow DMs to express their opinions more adequately, linguistic preference relations and fuzzy pairwise comparisons with seven granularities are provided to construct the HoQ. To decrease the subjectivity in deriving aggregated assessments, a new approach incorporated with LLSM and WLSM is proposed to handle these multi-format and multi-granularity assessments for constructing the HoQ which are given by the focus group. The LLSM and two normalized formulae are employed to solve the fuzzy comparison matrices and normalize the assessments in the form of linguistic preference relations. Then, the WLSM is developed to aggregate the final normalized multi-granularity assessments, respectively. Furthermore, an application of HDD machine is provided to illustrate the effectiveness of the proposed method. Further work would consider other familiar expressions with different granularities to incorporate into the proposed model for constructing the HoQ. In view of a real-world application, the correlations among CRs should be considered to construct the HoQ. Furthermore, the proposed method would be extended to the construction of subsequent HoQs for implementing the QFD application.