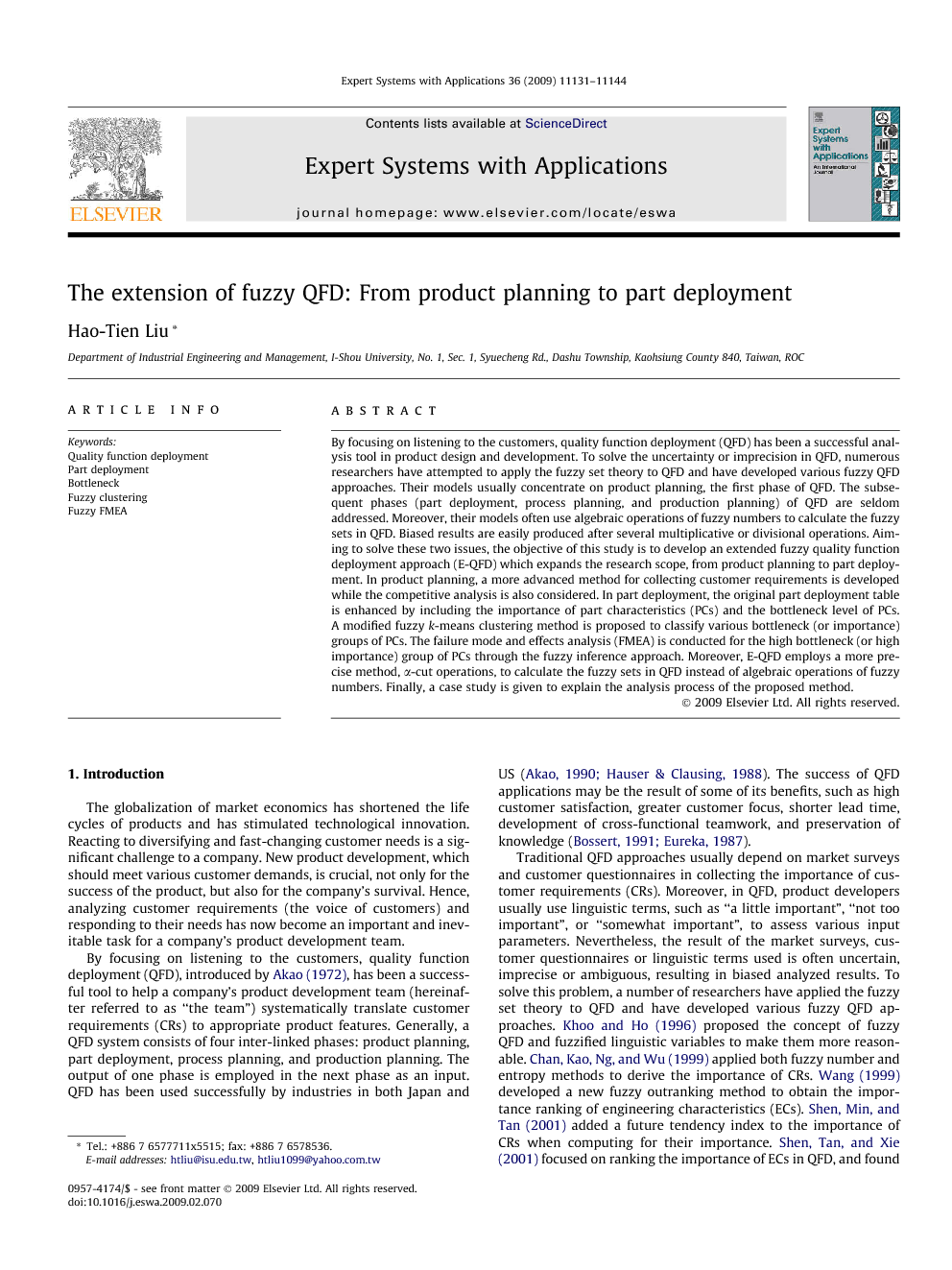 By focusing on listening to the customers, quality function deployment (QFD) has been a successful analysis tool in product design and development. To solve the uncertainty or imprecision in QFD, numerous researchers have attempted to apply the fuzzy set theory to QFD and have developed various fuzzy QFD approaches. Their models usually concentrate on product planning, the first phase of QFD. The subsequent phases (part deployment, process planning, and production planning) of QFD are seldom addressed. Moreover, their models often use algebraic operations of fuzzy numbers to calculate the fuzzy sets in QFD. Biased results are easily produced after several multiplicative or divisional operations. Aiming to solve these two issues, the objective of this study is to develop an extended fuzzy quality function deployment approach (E-QFD) which expands the research scope, from product planning to part deployment. In product planning, a more advanced method for collecting customer requirements is developed while the competitive analysis is also considered. In part deployment, the original part deployment table is enhanced by including the importance of part characteristics (PCs) and the bottleneck level of PCs. A modified fuzzy k-means clustering method is proposed to classify various bottleneck (or importance) groups of PCs. The failure mode and effects analysis (FMEA) is conducted for the high bottleneck (or high importance) group of PCs through the fuzzy inference approach. Moreover, E-QFD employs a more precise method, α-cut operations, to calculate the fuzzy sets in QFD instead of algebraic operations of fuzzy numbers. Finally, a case study is given to explain the analysis process of the proposed method.

In this study, we proposed an extended fuzzy quality function deployment (E-QFD) approach, which expanded from product planning to part deployment. The E-QFD approach can provide product developers with a lot of valuable information and more accurate analysis results. Specifically, the proposed method has the following advantages or contributions. (1) Adopts a better computation method (α-cutoperations) to derive the fuzzy sets in QFD; thus, the obtained fuzzy sets will be more accurate. (2) Uses a more precise (pairwise comparison) method for collecting the importance of CRs and employs the consistency test to examine the assessed results of customers. (3) Includes the competitive analysis in product planning so that the team can clearly identify the strengths, weaknesses, intended market positions, and sales points of the product to be developed. (4) Expands the original part deployment table by including the importance of PCs, the bottleneck level of PCs, and the FMEA. (5) Proposes a modified fuzzy clustering method that can effectively classify the obtained fuzzy numbers into several different levels of groups. (6) Uses the fuzzy inference approach to derive the risk level of potential failure modes for the high bottleneck (or high importance) group of PCs. (7) More importantly, provides the team with valuable information, such as the importance ranking of CRs, ECs, and PCs, the bottleneck ranking of PCs, various bottleneck (or importance) groups of PCs, and the FMEA result. The acquired information may help the team better understand product development problems that they are facing. Finally, the application of the proposed E-QFD method is not just limited to product development. The proposed method can be slightly modified and extended to other management decision problems (e.g. supply chain management, service quality evaluation). Several issues could be further investigated to enhance the practicality of the proposed method. For example, a better fuzzy clustering algorithm, discussed in Section 4.2, could be developed. A further exploration of the subsequent phases (process planning and production planning) of QFD would be beneficial for subsequent product development and production phases. Finally, a user-friendly and intelligent decision support system could be developed based on the proposed method.