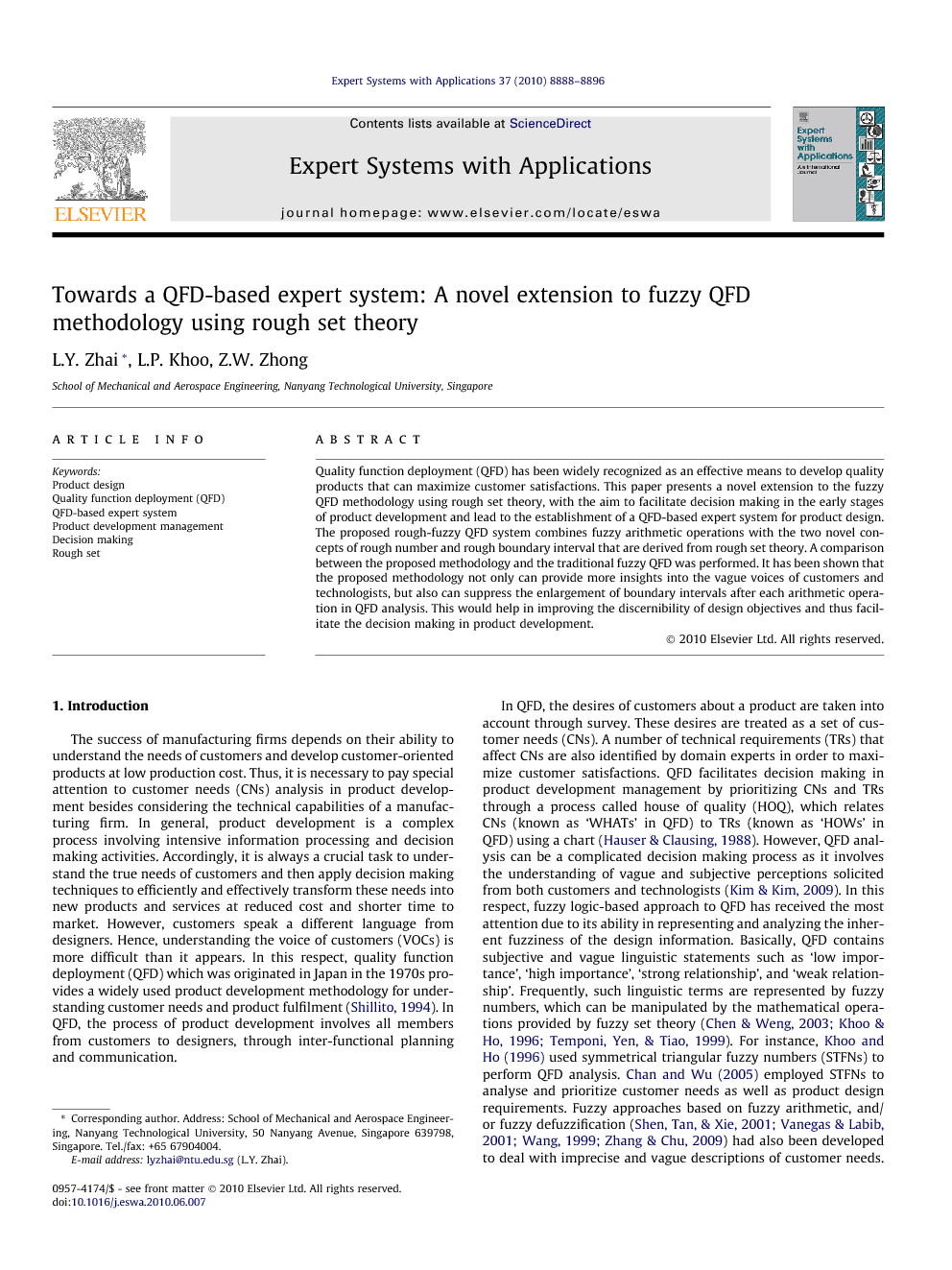 Quality function deployment (QFD) has been widely recognized as an effective means to develop quality products that can maximize customer satisfactions. This paper presents a novel extension to the fuzzy QFD methodology using rough set theory, with the aim to facilitate decision making in the early stages of product development and lead to the establishment of a QFD-based expert system for product design. The proposed rough-fuzzy QFD system combines fuzzy arithmetic operations with the two novel concepts of rough number and rough boundary interval that are derived from rough set theory. A comparison between the proposed methodology and the traditional fuzzy QFD was performed. It has been shown that the proposed methodology not only can provide more insights into the vague voices of customers and technologists, but also can suppress the enlargement of boundary intervals after each arithmetic operation in QFD analysis. This would help in improving the discernibility of design objectives and thus facilitate the decision making in product development.

The success of manufacturing firms depends on their ability to understand the needs of customers and develop customer-oriented products at low production cost. Thus, it is necessary to pay special attention to customer needs (CNs) analysis in product development besides considering the technical capabilities of a manufacturing firm. In general, product development is a complex process involving intensive information processing and decision making activities. Accordingly, it is always a crucial task to understand the true needs of customers and then apply decision making techniques to efficiently and effectively transform these needs into new products and services at reduced cost and shorter time to market. However, customers speak a different language from designers. Hence, understanding the voice of customers (VOCs) is more difficult than it appears. In this respect, quality function deployment (QFD) which was originated in Japan in the 1970s provides a widely used product development methodology for understanding customer needs and product fulfilment (Shillito, 1994). In QFD, the process of product development involves all members from customers to designers, through inter-functional planning and communication. In QFD, the desires of customers about a product are taken into account through survey. These desires are treated as a set of customer needs (CNs). A number of technical requirements (TRs) that affect CNs are also identified by domain experts in order to maximize customer satisfactions. QFD facilitates decision making in product development management by prioritizing CNs and TRs through a process called house of quality (HOQ), which relates CNs (known as ‘WHATs’ in QFD) to TRs (known as ‘HOWs’ in QFD) using a chart (Hauser & Clausing, 1988). However, QFD analysis can be a complicated decision making process as it involves the understanding of vague and subjective perceptions solicited from both customers and technologists (Kim & Kim, 2009). In this respect, fuzzy logic-based approach to QFD has received the most attention due to its ability in representing and analyzing the inherent fuzziness of the design information. Basically, QFD contains subjective and vague linguistic statements such as ‘low importance’, ‘high importance’, ‘strong relationship’, and ‘weak relationship’. Frequently, such linguistic terms are represented by fuzzy numbers, which can be manipulated by the mathematical operations provided by fuzzy set theory (Chen and Weng, 2003, Khoo and Ho, 1996 and Temponi et al., 1999). For instance, Khoo and Ho (1996) used symmetrical triangular fuzzy numbers (STFNs) to perform QFD analysis. Chan and Wu (2005) employed STFNs to analyse and prioritize customer needs as well as product design requirements. Fuzzy approaches based on fuzzy arithmetic, and/or fuzzy defuzzification (Shen et al., 2001, Vanegas and Labib, 2001, Wang, 1999 and Zhang and Chu, 2009) had also been developed to deal with imprecise and vague descriptions of customer needs. Other than the traditional fuzzy QFD method, some interesting attempts using analytic hierarchy process (AHP), rough sets and Kano’s model have also been proposed to quantify and analyse the importance ratings of customer needs in QFD (Armacost et al., 1994 and Li et al., 2009). However, further investigation shows that the traditional representation and processing of vague and imprecise information in QFD may be subjective, complex or controversial. For example, the widely used fuzzy number based QFD analysis has some critical drawbacks. First of all, the membership function of fuzzy number is difficult to define. Frequently, it is predetermined by experts subjectively, which may not be in good agreement with actual facts. Second, the boundary intervals of fuzzy numbers expand rapidly as a result of fuzzy arithmetic operations. More specifically, it has been observed that after each arithmetic operation between two fuzzy numbers, the boundary interval of the resultant fuzzy number tends to become larger. The enlargement of boundary intervals after fuzzy arithmetic operations may lead to low discernibility of the resultant fuzzy numbers, affect the prioritization of customer needs and technical requirements, and ultimately influence the decision making in product development management. This work examines the inherent vagueness in expressing the voice of customers as well as the voice of technologists, and proposes a rough-fuzzy QFD methodology based on the two novel concepts of rough number and rough boundary interval, to address the above issues. It aims to improve the effectiveness and efficiency in prioritizing customer needs and technical requirements, so as to facilitate the decision making in product development management. The paper is organised as follows. Section 2 reviews the basic concepts of fuzzy membership function and fuzzy number, as well as the fundamental notions of rough set theory. Two novel concepts, rough number and rough boundary interval are derived from the basic principles of rough sets. Section 3 proposes a hybrid rough-fuzzy QFD methodology that combines the two novel concepts with fuzzy arithmetic operations. A comparative study is presented in Section 4. It illustrates the advantages of the new methodology in handling the vague design information as well as in improving the effectiveness and efficiency for the prioritization of customer needs and technical requirements. Finally, the major conclusions achieved in this work are summarized in Section 5.

Effective and efficient prioritization of customer needs and technical requirements can facilitate decision making in QFD, and hence improve productivity in product development management. This work proposes a new hybrid rough-fuzzy QFD methodology by integrating fuzzy arithmetic operations with the two novel concepts of rough number and rough boundary interval which are derived from rough set theory. The proposed methodology successfully addresses two critical drawbacks of traditional fuzzy number based QFD in representing and processing vague deign information concerning the voices of customers and designers, namely the pre-determination of fuzzy membership functions and the enlargement of fuzzy boundary intervals in QFD analysis. The case study presented in this paper has shown that the proposed methodology can provide more insights into the voices of customers and technologists through the rough number based collective analysis, and it can also effectively reduce the enlargement of rough boundary intervals in QFD development. Smaller rough boundary intervals were observed after each arithmetic operation, compared to the method using STFNs. Therefore, the proposed methodology is able to produce more discernible prioritization of technical requirements, which can facilitate the decision making in product development management in order to improve customer satisfactions. Moreover, using rough numbers, collective analysis of vague design information can be extended and applied to various stages of QFD, for example, the evaluation of competitive priorities and improvement ratios, which are usually solicited from the opinions of a team of experts. It is postulated that the proposed rough-fuzzy QFD methodology will lead to the establishment of a QFD-based expert system which can remarkably facilitate the processes of strategic product planning, early design decision making and parameter target setting in product development