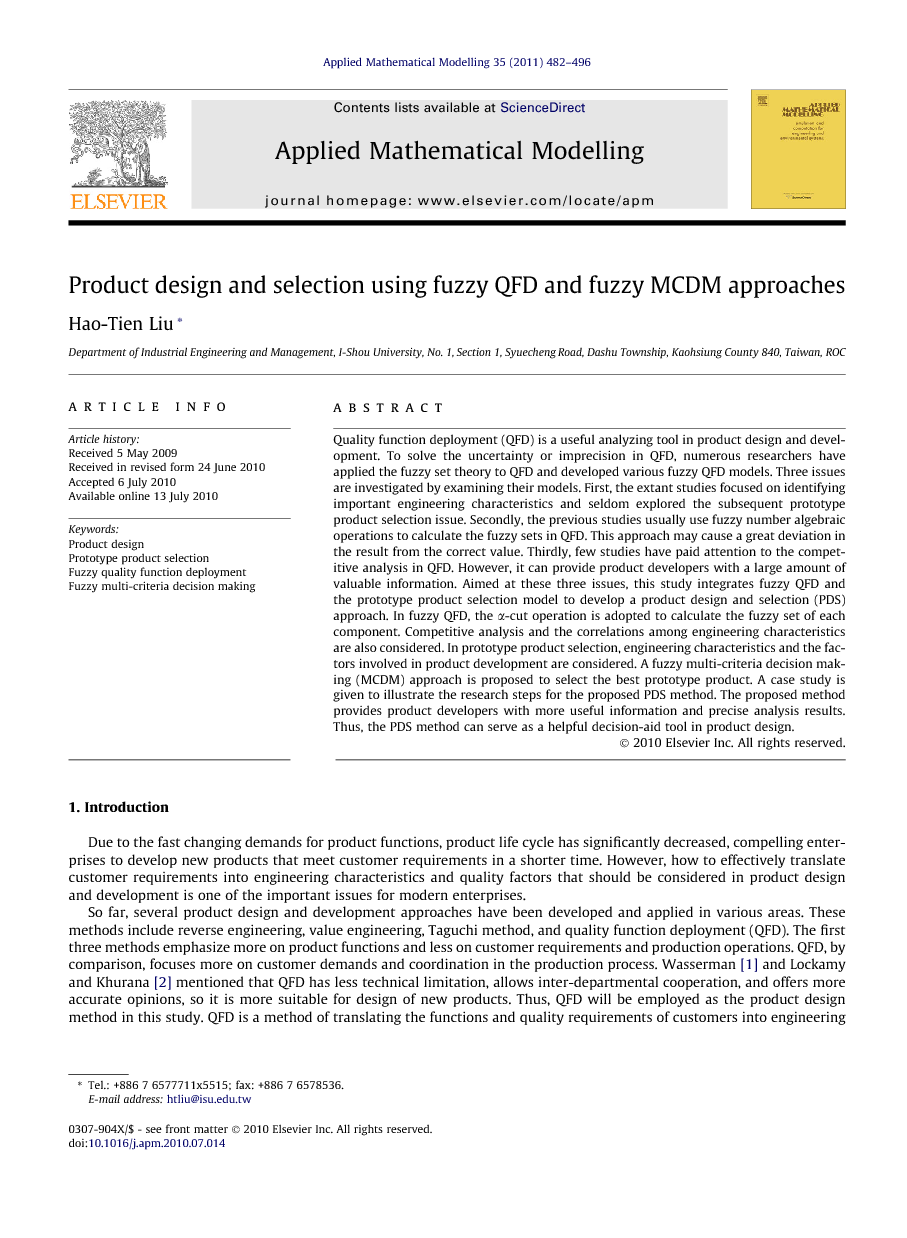 Quality function deployment (QFD) is a useful analyzing tool in product design and development. To solve the uncertainty or imprecision in QFD, numerous researchers have applied the fuzzy set theory to QFD and developed various fuzzy QFD models. Three issues are investigated by examining their models. First, the extant studies focused on identifying important engineering characteristics and seldom explored the subsequent prototype product selection issue. Secondly, the previous studies usually use fuzzy number algebraic operations to calculate the fuzzy sets in QFD. This approach may cause a great deviation in the result from the correct value. Thirdly, few studies have paid attention to the competitive analysis in QFD. However, it can provide product developers with a large amount of valuable information. Aimed at these three issues, this study integrates fuzzy QFD and the prototype product selection model to develop a product design and selection (PDS) approach. In fuzzy QFD, the α-cut operation is adopted to calculate the fuzzy set of each component. Competitive analysis and the correlations among engineering characteristics are also considered. In prototype product selection, engineering characteristics and the factors involved in product development are considered. A fuzzy multi-criteria decision making (MCDM) approach is proposed to select the best prototype product. A case study is given to illustrate the research steps for the proposed PDS method. The proposed method provides product developers with more useful information and precise analysis results. Thus, the PDS method can serve as a helpful decision-aid tool in product design.

Due to the fast changing demands for product functions, product life cycle has significantly decreased, compelling enterprises to develop new products that meet customer requirements in a shorter time. However, how to effectively translate customer requirements into engineering characteristics and quality factors that should be considered in product design and development is one of the important issues for modern enterprises. So far, several product design and development approaches have been developed and applied in various areas. These methods include reverse engineering, value engineering, Taguchi method, and quality function deployment (QFD). The first three methods emphasize more on product functions and less on customer requirements and production operations. QFD, by comparison, focuses more on customer demands and coordination in the production process. Wasserman [1] and Lockamy and Khurana [2] mentioned that QFD has less technical limitation, allows inter-departmental cooperation, and offers more accurate opinions, so it is more suitable for design of new products. Thus, QFD will be employed as the product design method in this study. QFD is a method of translating the functions and quality requirements of customers into engineering characteristics (ECs) that are considered in product design. QFD not only helps the product design team understand customer requirements and market tendencies but also effectively shortens product development time. Traditional QFD relies on market survey and communication with customers to obtain customer requirements (CRs). In addition, product developers usually have to use linguistic variables to set various parameters. However, the result of market survey and linguistic variables used are often uncertain or imprecise, usually resulting in biased analysis results. To solve this problem, a number of scholars have applied the fuzzy set theory to QFD and developed various fuzzy QFD approaches. These approaches include conventional QFD computation using fuzzy variables [3], [4] and [5], fuzzy outranking [6], entropy [7], fuzzy tendency analysis [8], fuzzy MCDM [9], fuzzy integral [10], fuzzy analytical network process [11], [12] and [13], fuzzy expected value [14] and [15], fuzzy goal programming [16], fuzzy expert systems [17], etc. Note that these fuzzy QFD approaches usually concentrate on obtaining the importance ranking of ECs. From a review of related literatures, three issues can be further investigated. (1) After the importance of each EC is computed, the product design team can use important ECs to design new products desired by customers. However, in the design process, there are usually more than one prototype products. Subject to limited resources, funds, and facilities, only the best prototype product can be selected for mass production. The extant studies only focus on identifying important ECs and seldom explore the subsequent prototype product selection issue. (2) The previous studies usually used algebraic operations of fuzzy numbers to calculate the fuzzy set of each component in QFD. Theoretically, after multiplication or division of fuzzy numbers, the result should be curve-shaped rather than linear, and an error may occur. Through several multiplicative or divisional operations, the error will gradually increase, causing a great deviation of the result from the correct value. (3) Only a small number of studies [4], [7], [18] and [19] have paid attention to the competitive analysis in QFD, where design quality and sales points are included. Such analysis allows product developers to understand the strength, weakness, and quality requirement of a certain product, so it should deserve more attentions on this issue. To solve the above issues, this study attempts to integrate fuzzy QFD and the prototype product selection model to develop a product design and selection (PDS) approach that can substantially benefit developers in product design. In fuzzy QFD, competitive analysis and correlation among ECs are considered. In addition, the α-cut operation is adopted to compute the fuzzy set of each component in QFD. In prototype product selection, in addition to ECs, production factors (such as production cost, technical difficulty, and product extensibility) will be considered as evaluation criteria. As product selection is a MCDM problem, a fuzzy MCDM method will be developed in this study. Based on the concept of linear assignment, the best prototype product can be selected for subsequent product development. The rest of this paper is organized as follows: Section 2 briefly introduces the concepts of QFD and reviews the related works of fuzzy QFD. Section 3 discusses the concept and the detailed steps of the proposed PDS approach. Section 4 illustrates the research steps of the proposed method using a case study, and the last section concludes the present research.

A product design and selection (PDS) approach is proposed in this study. This approach integrates fuzzy QFD with fuzzy MCDM. The proposed method can help product developers identify important ECs and select the best prototype product. Compared to previous fuzzy QFD studies, the proposed PDS method has the following advantages or strengths. (1) Adopts a better computation method (α-cut operations) to calculate the fuzzy set of each component in PDS so that the derived fuzzy set is more accurate. (2) Uses an advanced pairwise comparison method to derive more precise relative importance of CRs rather than simple weight aggregation methods used in previous studies. (3) Includes the competitive analysis in QFD so that product developers can clearly identify the strengths, weakness, intended market positions, and sales points of the product to be developed. (4) Considers both customer requirements and company’s production demands so that the prototype product selection can be more comprehensive and accurate. (5) Proposes a new fuzzy MCDM approach that can assist product developers in selecting the best prototype product for production. (6) Allows product developers to conduct a sensitivity analysis in prototype product selection when different α-cut (confidence or belief) levels are used. The practicality of this study can be further enhanced through: (1) Developing the research method into a decision support system, which can significantly increase developers’ willingness to use the proposed method and reduce time and effort required in computation; (2) Using more α-cuts in computing the importance ranking of ECs and prototype product selection to perform a detailed sensitivity analysis, which allows developers to identify under which confidence, decisions may potentially change, and use it as an important reference in product development.