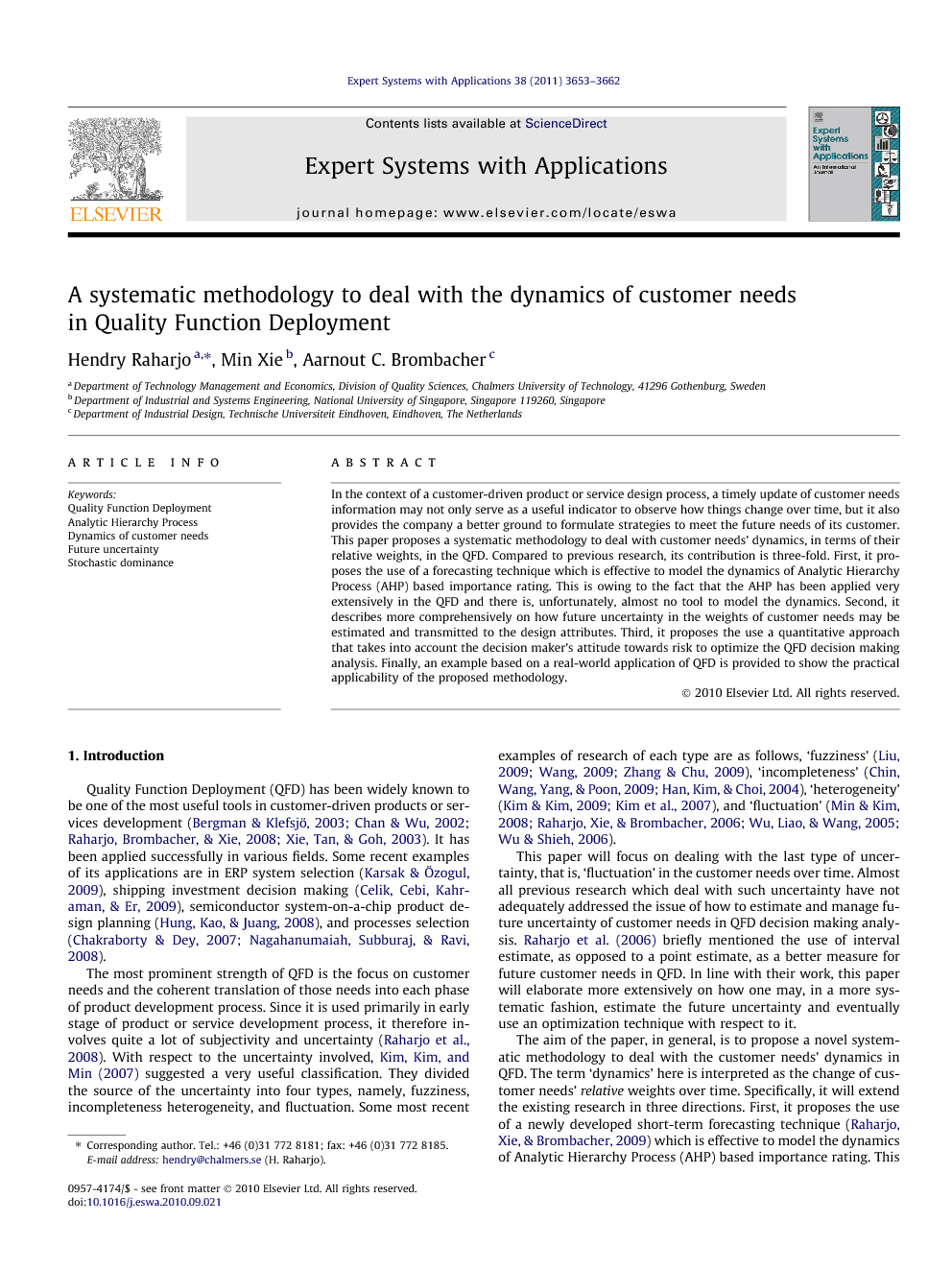 In the context of a customer-driven product or service design process, a timely update of customer needs information may not only serve as a useful indicator to observe how things change over time, but it also provides the company a better ground to formulate strategies to meet the future needs of its customer. This paper proposes a systematic methodology to deal with customer needs’ dynamics, in terms of their relative weights, in the QFD. Compared to previous research, its contribution is three-fold. First, it proposes the use of a forecasting technique which is effective to model the dynamics of Analytic Hierarchy Process (AHP) based importance rating. This is owing to the fact that the AHP has been applied very extensively in the QFD and there is, unfortunately, almost no tool to model the dynamics. Second, it describes more comprehensively on how future uncertainty in the weights of customer needs may be estimated and transmitted to the design attributes. Third, it proposes the use a quantitative approach that takes into account the decision maker’s attitude towards risk to optimize the QFD decision making analysis. Finally, an example based on a real-world application of QFD is provided to show the practical applicability of the proposed methodology.

Quality Function Deployment (QFD) has been widely known to be one of the most useful tools in customer-driven products or services development (Bergman and Klefsjö, 2003, Chan and Wu, 2002, Raharjo et al., 2008 and Xie et al., 2003). It has been applied successfully in various fields. Some recent examples of its applications are in ERP system selection (Karsak & Özogul, 2009), shipping investment decision making (Celik, Cebi, Kahraman, & Er, 2009), semiconductor system-on-a-chip product design planning (Hung, Kao, & Juang, 2008), and processes selection (Chakraborty and Dey, 2007 and Nagahanumaiah et al., 2008). The most prominent strength of QFD is the focus on customer needs and the coherent translation of those needs into each phase of product development process. Since it is used primarily in early stage of product or service development process, it therefore involves quite a lot of subjectivity and uncertainty (Raharjo et al., 2008). With respect to the uncertainty involved, Kim, Kim, and Min (2007) suggested a very useful classification. They divided the source of the uncertainty into four types, namely, fuzziness, incompleteness heterogeneity, and fluctuation. Some most recent examples of research of each type are as follows, ‘fuzziness’ (Liu, 2009, Wang, 2009 and Zhang and Chu, 2009), ‘incompleteness’ (Chin et al., 2009 and Han et al., 2004), ‘heterogeneity’ (Kim and Kim, 2009 and Kim et al., 2007), and ‘fluctuation’ (Min and Kim, 2008, Raharjo et al., 2006, Wu et al., 2005 and Wu and Shieh, 2006). This paper will focus on dealing with the last type of uncertainty, that is, ‘fluctuation’ in the customer needs over time. Almost all previous research which deal with such uncertainty have not adequately addressed the issue of how to estimate and manage future uncertainty of customer needs in QFD decision making analysis. Raharjo et al. (2006) briefly mentioned the use of interval estimate, as opposed to a point estimate, as a better measure for future customer needs in QFD. In line with their work, this paper will elaborate more extensively on how one may, in a more systematic fashion, estimate the future uncertainty and eventually use an optimization technique with respect to it. The aim of the paper, in general, is to propose a novel systematic methodology to deal with the customer needs’ dynamics in QFD. The term ‘dynamics’ here is interpreted as the change of customer needs’ relative weights over time. Specifically, it will extend the existing research in three directions. First, it proposes the use of a newly developed short-term forecasting technique (Raharjo, Xie, & Brombacher, 2009) which is effective to model the dynamics of Analytic Hierarchy Process (AHP) based importance rating. This is owing to the fact that the AHP has been applied very extensively in the QFD (Ho, 2008), and there is almost no tool to model the dynamics. Second, it describes more comprehensively on how future uncertainty in the weights of customer needs may be estimated and transmitted to the design attributes. Third, it proposes the use a quantitative approach that takes into account the decision maker’s attitude towards risk to optimize the QFD decision making analysis. The paper is organized as follows. In the next section (Section 2), the notion of dynamic QFD (DQFD) will be described in terms of its significance, model, and tools used. Section 3 will elaborate the proposed systematic methodology to deal with the customer needs’ dynamics along with their future uncertainty. An example based on a real-world application of QFD (Raharjo, Xie, Goh, & Brombacher, 2007) will be provided to illustrate how the proposed methodology works in practice (Section 4). Section 5 will discuss the issue of forecasting technique’s selection and a possible implication of the methodology to development of innovative products. Finally, a summary of the main contribution and possible future works are provided in Section 6. List of acronyms

The aim of this paper was to propose a novel systematic methodology to deal with the customer needs’ dynamics in QFD. Specifically, the contribution of this work can be summarized into three points. First, it has provided a way to model the AHP-based priorities’ change over time in the QFD. This is owing to the fact that the AHP has been applied very extensively in the QFD (Carnevalli and Miguel, 2008 and Ho, 2008), and yet there is almost no tool to model the dynamics. Second, it has elaborated the idea of incorporating future uncertainty of customer needs into a QFD analysis. Third, it has provided a more systematic way to optimize the QFD decision making analysis with respect to future VOC while considering the decision maker’s attitude towards risk. This is also to extend the work in Raharjo et al. (2006). The proposed methodology places a heavy emphasis on the need to monitor and follow the change of customer’s preference over time. It is because a timely update of customer needs information may provide useful feedback for the company to react differently and continuously over time as to formulate strategies or to upgrade its products or services to meet the changing needs of its customer. From a methodological standpoint, there are three areas that might be worth investigating for future work. First, it might be interesting to investigate the dynamics of other HoQ’s elements apart from the VOC. Second, it is a further study on how one may deal with the condition when there will be inclusion of a new customer need (VOC) or exclusion of an old one as the passage of time. Third, in the use of stochastic dominance approach in QFD, how one may know precisely the percentage of the resources to be allocated in the stochastically-ordered QCs remains a challenging issue to be addressed. Furthermore, if the QFD team has a risk seeking attitude, the proposed stochastic dominance approach may no longer apply. This calls for other appropriate approaches. From a practical standpoint, a worth noting aspect is the difference between the real rate of change of customer preference and the observation period, that is, how often the data should be collected. For example, it would be of little value if the customer needs’ information is collected monthly, while the real change rate is yearly. Finally, more real-world applications of the proposed methodology would certainly be of great value to showcase the usefulness of the dynamic QFD in practice.