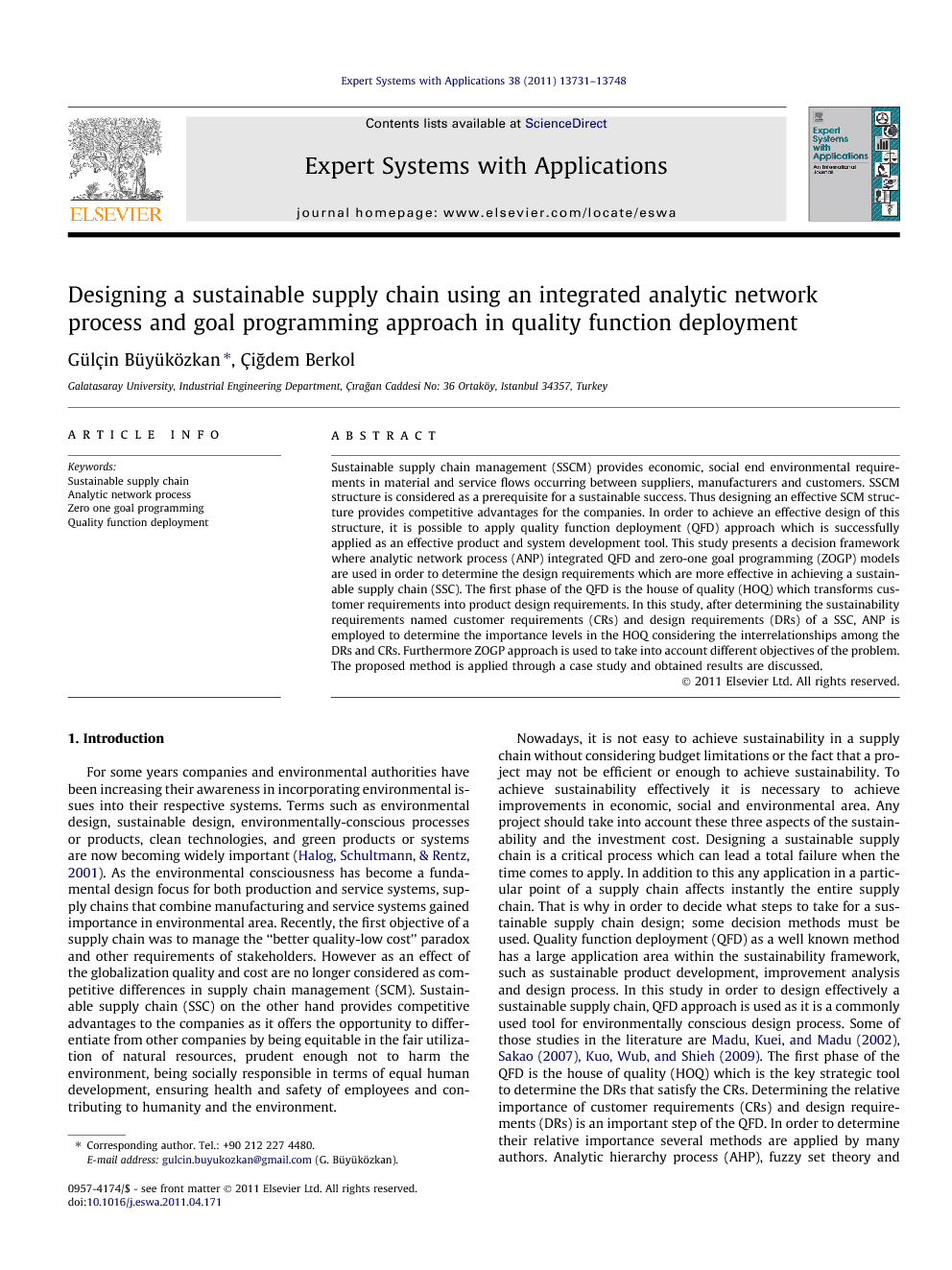 Sustainable supply chain management (SSCM) provides economic, social end environmental requirements in material and service flows occurring between suppliers, manufacturers and customers. SSCM structure is considered as a prerequisite for a sustainable success. Thus designing an effective SCM structure provides competitive advantages for the companies. In order to achieve an effective design of this structure, it is possible to apply quality function deployment (QFD) approach which is successfully applied as an effective product and system development tool. This study presents a decision framework where analytic network process (ANP) integrated QFD and zero-one goal programming (ZOGP) models are used in order to determine the design requirements which are more effective in achieving a sustainable supply chain (SSC). The first phase of the QFD is the house of quality (HOQ) which transforms customer requirements into product design requirements. In this study, after determining the sustainability requirements named customer requirements (CRs) and design requirements (DRs) of a SSC, ANP is employed to determine the importance levels in the HOQ considering the interrelationships among the DRs and CRs. Furthermore ZOGP approach is used to take into account different objectives of the problem. The proposed method is applied through a case study and obtained results are discussed

For some years companies and environmental authorities have been increasing their awareness in incorporating environmental issues into their respective systems. Terms such as environmental design, sustainable design, environmentally-conscious processes or products, clean technologies, and green products or systems are now becoming widely important (Halog, Schultmann, & Rentz, 2001). As the environmental consciousness has become a fundamental design focus for both production and service systems, supply chains that combine manufacturing and service systems gained importance in environmental area. Recently, the first objective of a supply chain was to manage the “better quality-low cost” paradox and other requirements of stakeholders. However as an effect of the globalization quality and cost are no longer considered as competitive differences in supply chain management (SCM). Sustainable supply chain (SSC) on the other hand provides competitive advantages to the companies as it offers the opportunity to differentiate from other companies by being equitable in the fair utilization of natural resources, prudent enough not to harm the environment, being socially responsible in terms of equal human development, ensuring health and safety of employees and contributing to humanity and the environment. Nowadays, it is not easy to achieve sustainability in a supply chain without considering budget limitations or the fact that a project may not be efficient or enough to achieve sustainability. To achieve sustainability effectively it is necessary to achieve improvements in economic, social and environmental area. Any project should take into account these three aspects of the sustainability and the investment cost. Designing a sustainable supply chain is a critical process which can lead a total failure when the time comes to apply. In addition to this any application in a particular point of a supply chain affects instantly the entire supply chain. That is why in order to decide what steps to take for a sustainable supply chain design; some decision methods must be used. Quality function deployment (QFD) as a well known method has a large application area within the sustainability framework, such as sustainable product development, improvement analysis and design process. In this study in order to design effectively a sustainable supply chain, QFD approach is used as it is a commonly used tool for environmentally conscious design process. Some of those studies in the literature are Madu et al., 2002, Sakao, 2007 and Kuo et al., 2009. The first phase of the QFD is the house of quality (HOQ) which is the key strategic tool to determine the DRs that satisfy the CRs. Determining the relative importance of customer requirements (CRs) and design requirements (DRs) is an important step of the QFD. In order to determine their relative importance several methods are applied by many authors. Analytic hierarchy process (AHP), fuzzy set theory and analytic network process (ANP) are the frequently used methods. AHP combined QFD methodologies are used by many authors such as Lu et al., 1994, Madu and Kuei, 1994, Madu et al., 1994b, Park and Kim, 1998, Wang et al., 1998, Lam and Zhao, 1998, Koksal and Eğitman, 1998, Zakarian and Kusiak, 1999, Partovi and Epperly, 1999, Partovi, 1999 and Chuang, 2001, Partovi and Corredoira (2002), Partovi, 2001, Hsiao, 2002, Kwong and Bai, 2002, Madu et al., 2002, Myint, 2003, Bhattacharya et al., 2005, Hanumaiah and Mukherjee, 2006, Partovi, 2007, Presley et al., 2007 and Çelik et al., 2009, and Georgiou, Gotzamani, Andronikidis, and Paltayian (2008). On the other hand as AHP includes an assumption about the independence among elements under a hierarchical structure, it does not consider the possible interrelationships among DRs and CRs. Thus the ANP method which takes into account the interrelationships among DRs and CRs is used in this study in order to obtain a well-built model as in many other studies like Karsak et al., 2002, Partovi, 2001, Lin et al., 2010, Partovi and Corredoira, 2002, Kahraman et al., 2006, Iranmanesh and Tabrizi, 2009, Lee et al., 2008, Andronikidis et al., 2009, Alptekin and Isiklar, 2005, Pal et al., 2007 and Georgiou et al., 2008, and Büyüközkan, Ertay, Kahraman, and Ruan (2004). In this paper, the methodology proposed integrates two decision making techniques, ANP and zero one goal programming (ZOGP) for determining the DRs that will be considered in designing the sustainable supply chain. The ZOGP is used in order to determine the DRs to be considered in the design process satisfying the ANP results and the goal named “cost” in this study. The plan of the article is as follows. In Section 2, definition of the sustainability concept and its appearance in supply chain is given. Section 3 announces the application areas of QFD in general and then presents literature survey of the sustainable QFD. Section 4 presents literature surveys of ANP combined QFD and integrated ANP&ZOGP combined QFD approaches. And then the decision methodology is given. In Section 5, the proposed QFD based sustainable SCM framework is presented. Finally in Section 6 the decision framework is illustrated via a case study.

In today’s competitive business environment, the importance of an effective supply chain management is increasing. Until recently, stakeholder needs were focused on economic expectations such as reduced cost, inventory management, etc. As the environmentally consciousness increased, stakeholder needs changed. Sustainability became an important requirement for production systems, service systems and thus for supply chains. In this paper, a novel methodology to determine the design requirements of a sustainable supply chain is presented. The methodology starts with the identification of the sustainability requirements named CRs and DRs of a sustainable SC. Then supermatrix approach of ANP incorporated with the QFD is used to consider the interdependencies among CRs and DRs. Finally the results of ANP and the relative importance weights of the additional goals are used in zero one GP in order to determine the most suitable DRs of a sustainable SC. In order to create a better understanding, the concept of sustainability and its function in the supply chain are also discussed and literature surveys about the ANP combined QFD, ANP & GP combined QFD and Sustainable QFD applications are given. After the description of the proposed framework, the decision procedure is demonstrated via a case study. The decision methodology presented in this study can be extended for real-world applications of QFD by considering additional resource limitations, goals, customer requirements and design requirements. On the other hand, in this study crisp numbers are used, a model using fuzzy numbers can be presented in future studies and the results obtained from crisp numbers and fuzzy numbers can be compared.