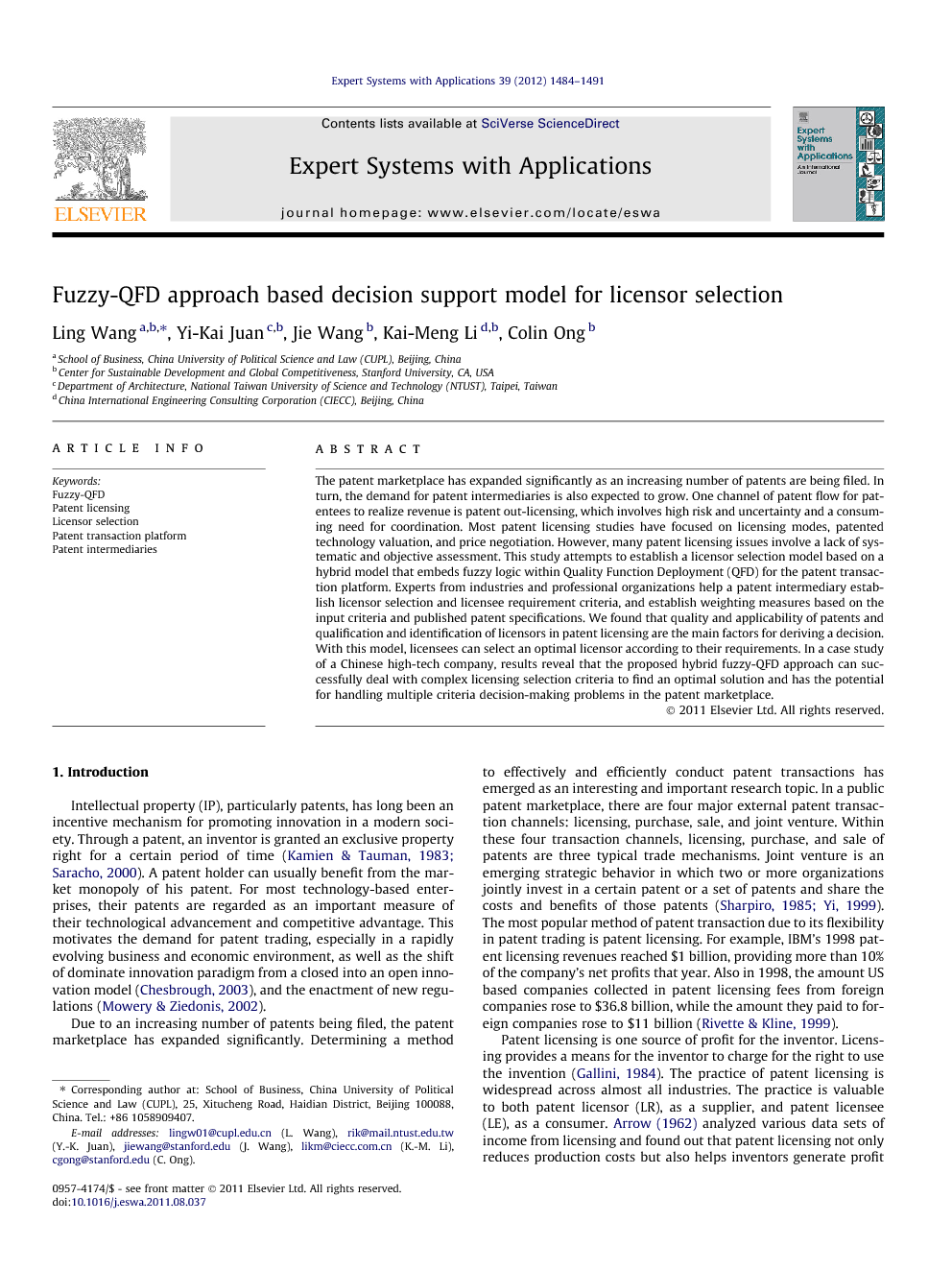 The patent marketplace has expanded significantly as an increasing number of patents are being filed. In turn, the demand for patent intermediaries is also expected to grow. One channel of patent flow for patentees to realize revenue is patent out-licensing, which involves high risk and uncertainty and a consuming need for coordination. Most patent licensing studies have focused on licensing modes, patented technology valuation, and price negotiation. However, many patent licensing issues involve a lack of systematic and objective assessment. This study attempts to establish a licensor selection model based on a hybrid model that embeds fuzzy logic within Quality Function Deployment (QFD) for the patent transaction platform. Experts from industries and professional organizations help a patent intermediary establish licensor selection and licensee requirement criteria, and establish weighting measures based on the input criteria and published patent specifications. We found that quality and applicability of patents and qualification and identification of licensors in patent licensing are the main factors for deriving a decision. With this model, licensees can select an optimal licensor according to their requirements. In a case study of a Chinese high-tech company, results reveal that the proposed hybrid fuzzy-QFD approach can successfully deal with complex licensing selection criteria to find an optimal solution and has the potential for handling multiple criteria decision-making problems in the patent marketplace.

Intellectual property (IP), particularly patents, has long been an incentive mechanism for promoting innovation in a modern society. Through a patent, an inventor is granted an exclusive property right for a certain period of time (Kamien and Tauman, 1983 and Saracho, 2000). A patent holder can usually benefit from the market monopoly of his patent. For most technology-based enterprises, their patents are regarded as an important measure of their technological advancement and competitive advantage. This motivates the demand for patent trading, especially in a rapidly evolving business and economic environment, as well as the shift of dominate innovation paradigm from a closed into an open innovation model (Chesbrough, 2003), and the enactment of new regulations (Mowery & Ziedonis, 2002). Due to an increasing number of patents being filed, the patent marketplace has expanded significantly. Determining a method to effectively and efficiently conduct patent transactions has emerged as an interesting and important research topic. In a public patent marketplace, there are four major external patent transaction channels: licensing, purchase, sale, and joint venture. Within these four transaction channels, licensing, purchase, and sale of patents are three typical trade mechanisms. Joint venture is an emerging strategic behavior in which two or more organizations jointly invest in a certain patent or a set of patents and share the costs and benefits of those patents (Sharpiro, 1985 and Yi, 1999). The most popular method of patent transaction due to its flexibility in patent trading is patent licensing. For example, IBM’s 1998 patent licensing revenues reached $1 billion, providing more than 10% of the company’s net profits that year. Also in 1998, the amount US based companies collected in patent licensing fees from foreign companies rose to $36.8 billion, while the amount they paid to foreign companies rose to $11 billion (Rivette & Kline, 1999). Patent licensing is one source of profit for the inventor. Licensing provides a means for the inventor to charge for the right to use the invention (Gallini, 1984). The practice of patent licensing is widespread across almost all industries. The practice is valuable to both patent licensor (LR), as a supplier, and patent licensee (LE), as a consumer. Arrow (1962) analyzed various data sets of income from licensing and found out that patent licensing not only reduces production costs but also helps inventors generate profit under general instances. Kamien and Tauman, 1986, Kamien et al., 1992 and Kamien, 2002 discussed different licensing strategies and their impact on industry’s market structure and potential revenues for inventors. In other research, Katz and Shapiro, 1985 and Katz and Shapiro, 1986 studied a three-stage, asymmetric duopoly game of R&D rivalry to demonstrate the impacts of disparate patent licensing strategies. For most previous studies of the licensing selection problem, discussions have been mainly focused on licensing selection strategies between one licensor and multiple potential licensees, under the assumption that those licensees engaged in Cournot competition amongst themselves (Kamien, 1992). However, such an assumption is unrealistic due to the fact that licensees become increasingly more active and selective for licensing patents. In addition, a licensee takes into account not only the patented technology’s quality and cost (Kamien & Tauman, 1983), but also its feasibility. More specifically, most patent licensing studies have focused on explanations for licensing, licensing modes, patented technology valuation, and price negotiation (Rostoker, 1984 and Wang, 1998). However, patent licensing often suffers from the lack of a systematic and objective method for assessment. That is, a systematic and objective assessment framework for the patent licensing selection process among multiple licensors and licensees is largely missing. With patent licensing becoming a more mutually selective process for both licensor and licensee, an effective and structured licensing selection method becomes highly desirable. The objective of this research is to develop a decision support system for a licensee to evaluate the relevant characteristics of licensable patents and their patent holders, and then to select the optimal patent and its licensor for practical purposes. The licensing selection model for a licensor is based on a hybrid model embedding fuzzy logic within Quality Function Deployment (QFD). First, licensor selection criteria and licensee requirements and their weights are assessed by experts from industries, research institutions, and professional organizations; next, a proposed fittest licensor is proposed for a licensee through the patent transaction platform. With this model, licensees can select the optimal licensor according to their requirements. The method is further illustrated using the case study in which results reveal that the proposed hybrid fuzzy-QFD approach can deal with complex licensing selection criteria and find an optimal solution for a licensee. The method demonstrates the potential for handling multiple criteria decision-making problems in the patent marketplace.

Due to limited number of patents on the market, traditional patent licensing is regarded as a selection process where major decisions are mainly made by licensors. For such a patent exchange, in which licensees do not have many choices for comparable patents to fulfill their requirements, licensors can usually take advantage of the situation to benefit most. However, with the rising number of patents being filed, patents of alternative technologies are more readily available for licensees to select from publicly. Patents are usually complex, and as a result, selecting proper patents for licensees requires significant technical and business specialties for evaluating different patents for applications. In addition, there are other asymmetric information issues between a licensee and a licensor during a licensing process. To effectively resolve these problems, a patent transaction platform, which enables free information exchange among licensors and licensees, gradually emerges as a dominate form of trading intermediary. One critical issue for patent selection through such a platform is the need of decision support for optimally selecting patents for licensees. This paper provides a systematic approach of optimal patent requirement matching for licensees. More specifically, we provide a fuzzy-QFD approach for patent requirement matching, using information of quality and applicability of patents, and qualification and identification information of a licensor. On top of our detailed analysis of criteria selection, we introduce a fuzzy-QFD approach to support the relation assessment for licensees’ requirements (WHATs) and licensors’ specifications (HOWs). This fuzzy-QFD approach embeds fuzzy logic within a QFD approach to solve the licensing selection problem. A case study of a Chinese company is presented to verify the proposed fuzzy-QFD approach for decision support during a licensor selection process. From this case study, we demonstrated that the proposed fuzzy-QFD decision-making approach was able to handle multiple criteria decision-making problems in a computationally efficient way. Furthermore, we conducted sensitivity analysis of this approach by introducing minor diversifications of expert views into values used as criteria. Results showed that these minor diversifications did not affect the decision of licensor selection through this approach. However, the scope of the analysis of licensor selection criteria in this research is limited to the electronics industry where evaluation of quality and applicability of patents are more standard by nature. Future study will extend the scope to other industries and analyze the properties of the weights of WHAT and HOW in different industries. In addition, more detailed research will be carried out to focus on the impacts of different licensing types, including Exclusive Licensing, Third-exception Licensing, and General Licensing, on determining licensee requirements.