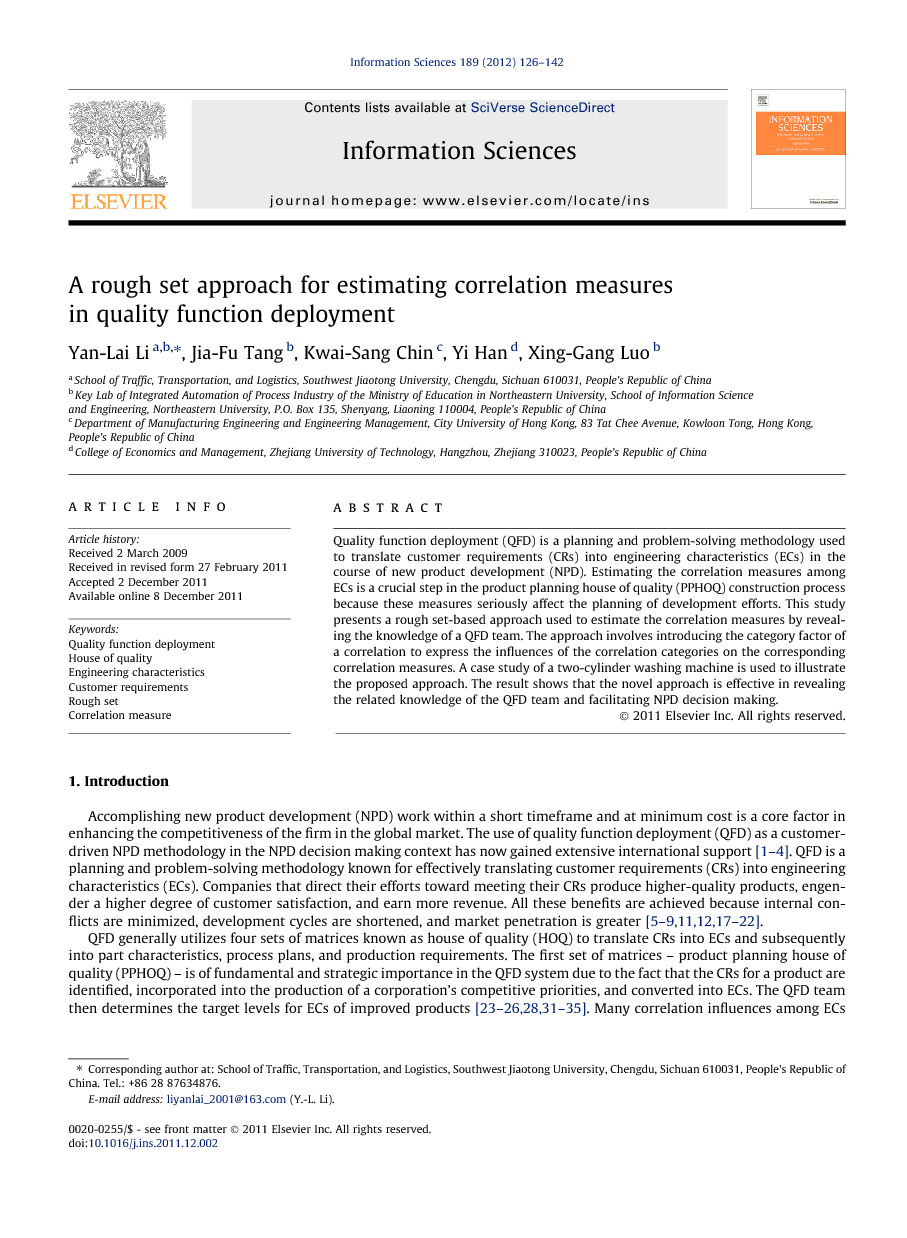 Quality function deployment (QFD) is a planning and problem-solving methodology used to translate customer requirements (CRs) into engineering characteristics (ECs) in the course of new product development (NPD). Estimating the correlation measures among ECs is a crucial step in the product planning house of quality (PPHOQ) construction process because these measures seriously affect the planning of development efforts. This study presents a rough set-based approach used to estimate the correlation measures by revealing the knowledge of a QFD team. The approach involves introducing the category factor of a correlation to express the influences of the correlation categories on the corresponding correlation measures. A case study of a two-cylinder washing machine is used to illustrate the proposed approach. The result shows that the novel approach is effective in revealing the related knowledge of the QFD team and facilitating NPD decision making.

Accomplishing new product development (NPD) work within a short timeframe and at minimum cost is a core factor in enhancing the competitiveness of the firm in the global market. The use of quality function deployment (QFD) as a customer-driven NPD methodology in the NPD decision making context has now gained extensive international support [1], [2], [3] and [4]. QFD is a planning and problem-solving methodology known for effectively translating customer requirements (CRs) into engineering characteristics (ECs). Companies that direct their efforts toward meeting their CRs produce higher-quality products, engender a higher degree of customer satisfaction, and earn more revenue. All these benefits are achieved because internal conflicts are minimized, development cycles are shortened, and market penetration is greater [5], [6], [7], [8], [9], [11], [12], [17], [18], [19], [20], [21] and [22]. QFD generally utilizes four sets of matrices known as house of quality (HOQ) to translate CRs into ECs and subsequently into part characteristics, process plans, and production requirements. The first set of matrices – product planning house of quality (PPHOQ) – is of fundamental and strategic importance in the QFD system due to the fact that the CRs for a product are identified, incorporated into the production of a corporation’s competitive priorities, and converted into ECs. The QFD team then determines the target levels for ECs of improved products [23], [24], [25], [26], [28], [31], [32], [33], [34] and [35]. Many correlation influences among ECs fall within the PPHOQ process and have degrees and directions that have serious effects on the development effort. The negative impacts of one EC on others represent design bottlenecks that call for special planning or breakthrough attempts. The correlation measures determine those technical areas that require close communication and collaboration and those areas that do not. Estimating correlation measures among ECs is thus a crucial step in the NPD process. CRs are transformed into ECs; thus, considerable effort must be made to acquire accurate correlation measures. This is a key factor in the ongoing success of the corporation [1], [2], [3], [4], [5], [6], [7], [47], [48], [54], [55] and [56]. Most QFD research [5], [6] and [7] analyzes correlation measures by means of an elaborate and sensitive scale approach that occasionally results in inexact correlation measures. Li and Gao [36] proposed a linear mathematical program to tackle design of experiment (DOE) data as a means of estimating the correlation measures. Whether or not the DOE method can be used depends on the availability of a large volume of experimental data; the time taken and cost incurred in conducting the experiments are therefore major obstacles. Park and Kim [46] proposed a swing approach as an element of multiple-attribute decision making to investigate correlation measures. However, their approach is in most cases elaborate and sensitive, and produces similarly inexact results. Kim et al. [32], who first suggested the use of fuzzy regression to estimate correlation measures in QFD, proposed a fuzzy multi-criteria modeling approach for product planning. Their study employed a fuzzy linear regression model with symmetric triangular fuzzy numbers to investigate correlations. Meanwhile, Fung et al. [16] integrated the least-squares regression into fuzzy linear regression. Consequently, they developed a pair of hybrid linear programming models with asymmetric triangular fuzzy coefficients and a pair of hybrid linear programming models with asymmetric trapezoidal fuzzy coefficients. This approach can be used to handle situations where the amount of known data is small and the correlations are vague; however, the results may be unreliable or unachievable due to data unavailability or because selecting the membership function in a fuzzy set is difficult and affected by subjective experience. Some scholars (e.g., [26] and [14]) initially proposed estimating the correlation measure matrix based on the analytic network model (ANP) described by Saaty and Takizawa [61]. Moreover, recent ANP method developments have been applied in estimating correlation measures. Partovi [47] and [48] employed a better and more advanced ANP approach to estimate the correlation measure matrix. To effectively quantify and analyze the QFD team’s subjective experience, knowledge, and judgments in a systematic manner, Raharjo et al. [53] proposed a generic ANP in which the correlation measure matrix is obtained to enable QFD practitioners to exploit the potential of QFD as a powerful NPD tool. The correlation roof was tackled symmetrically in the early stages of QFD. To solve the problem of a lack of symmetric correlations, Moskowitz and Kim [44] changed the structure of the roof to a square matrix. However, the square matrix is subject to another limitation in that the influence of one EC on another depends on the CRs in this structure. A single matrix is insufficient to model these influences; therefore, in recent research, the single matrix has been changed to a group of matrices in which one matrix corresponds to each CR [58] and [59]. Rough set theory is a relatively new and intelligent knowledge discovery tool. It is widely used to find data dependencies, evaluate the importance of attributes, reveal data patterns, reduce the number of redundant objects and attributes, and seek the minimum subset of attributes [10], [13], [15], [27], [29], [30], [41], [43], [45] and [60]. Moreover, its main advantage is that it does not require preliminary or additional information regarding the data, such as the membership grades or possibility values needed in fuzzy set theory [49], [50], [51], [52], [68], [69], [70], [71], [72], [73] and [74]. The correlation measure matrix corresponding to each CR can therefore be identified with the assistance of the intelligent characteristics of a rough set. The rest of the paper is organized as follows. Section 2 describes a hierarchical framework used to construct the first five parts of PPHOQ and estimate the correlation measures. Section 3 presents a rough set approach employed to estimate the correlation measure matrix corresponding to each CR. An equivalent matrix is then obtained by integrating the final importance ratings of the CRs into a group of matrices. In Section 4, a case study of a two-cylinder washing machine is described to demonstrate the proposed method. Section 5 concludes the paper.