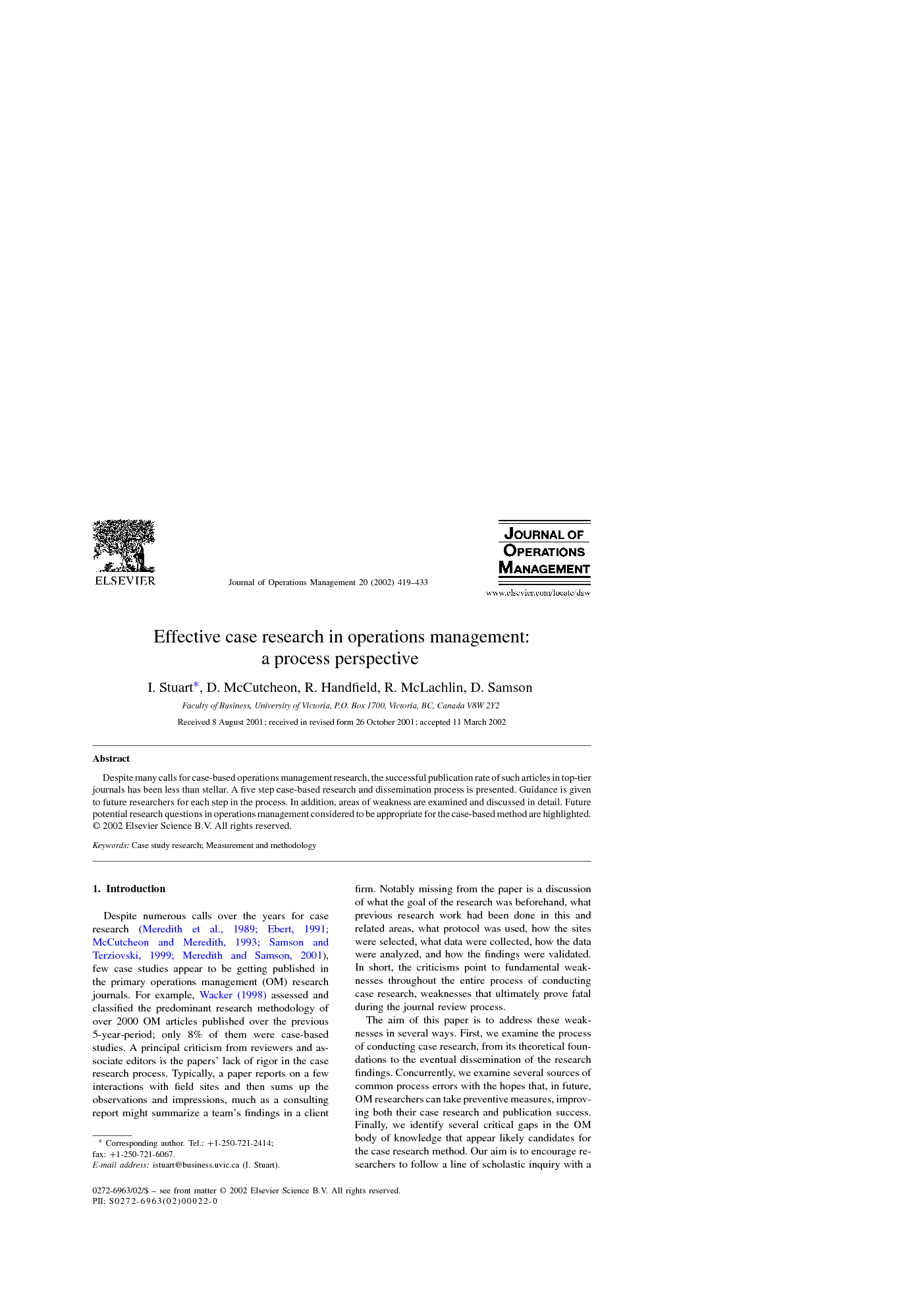 Despite many calls for case-based operations management research, the successful publication rate of such articles in top-tier journals has been less than stellar. A five step case-based research and dissemination process is presented. Guidance is given to future researchers for each step in the process. In addition, areas of weakness are examined and discussed in detail. Future potential research questions in operations management considered to be appropriate for the case-based method are highlighted.

Despite numerous calls over the years for case research (Meredith et al., 1989, Ebert, 1991, McCutcheon and Meredith, 1993, Samson and Terziovski, 1999 and Meredith and Samson, 2001), few case studies appear to be getting published in the primary operations management (OM) research journals. For example, Wacker (1998) assessed and classified the predominant research methodology of over 2000 OM articles published over the previous 5-year-period; only 8% of them were case-based studies. A principal criticism from reviewers and associate editors is the papers’ lack of rigor in the case research process. Typically, a paper reports on a few interactions with field sites and then sums up the observations and impressions, much as a consulting report might summarize a team’s findings in a client firm. Notably missing from the paper is a discussion of what the goal of the research was beforehand, what previous research work had been done in this and related areas, what protocol was used, how the sites were selected, what data were collected, how the data were analyzed, and how the findings were validated. In short, the criticisms point to fundamental weaknesses throughout the entire process of conducting case research, weaknesses that ultimately prove fatal during the journal review process. The aim of this paper is to address these weaknesses in several ways. First, we examine the process of conducting case research, from its theoretical foundations to the eventual dissemination of the research findings. Concurrently, we examine several sources of common process errors with the hopes that, in future, OM researchers can take preventive measures, improving both their case research and publication success. Finally, we identify several critical gaps in the OM body of knowledge that appear likely candidates for the case research method. Our aim is to encourage researchers to follow a line of scholastic inquiry with a high degree of relevancy. By combining research relevancy with a more rigorous case research approach, future case research efforts should meet increased dissemination success. To start, we describe a generic model of the research process and use it to assess how a case-based research approach should be followed.