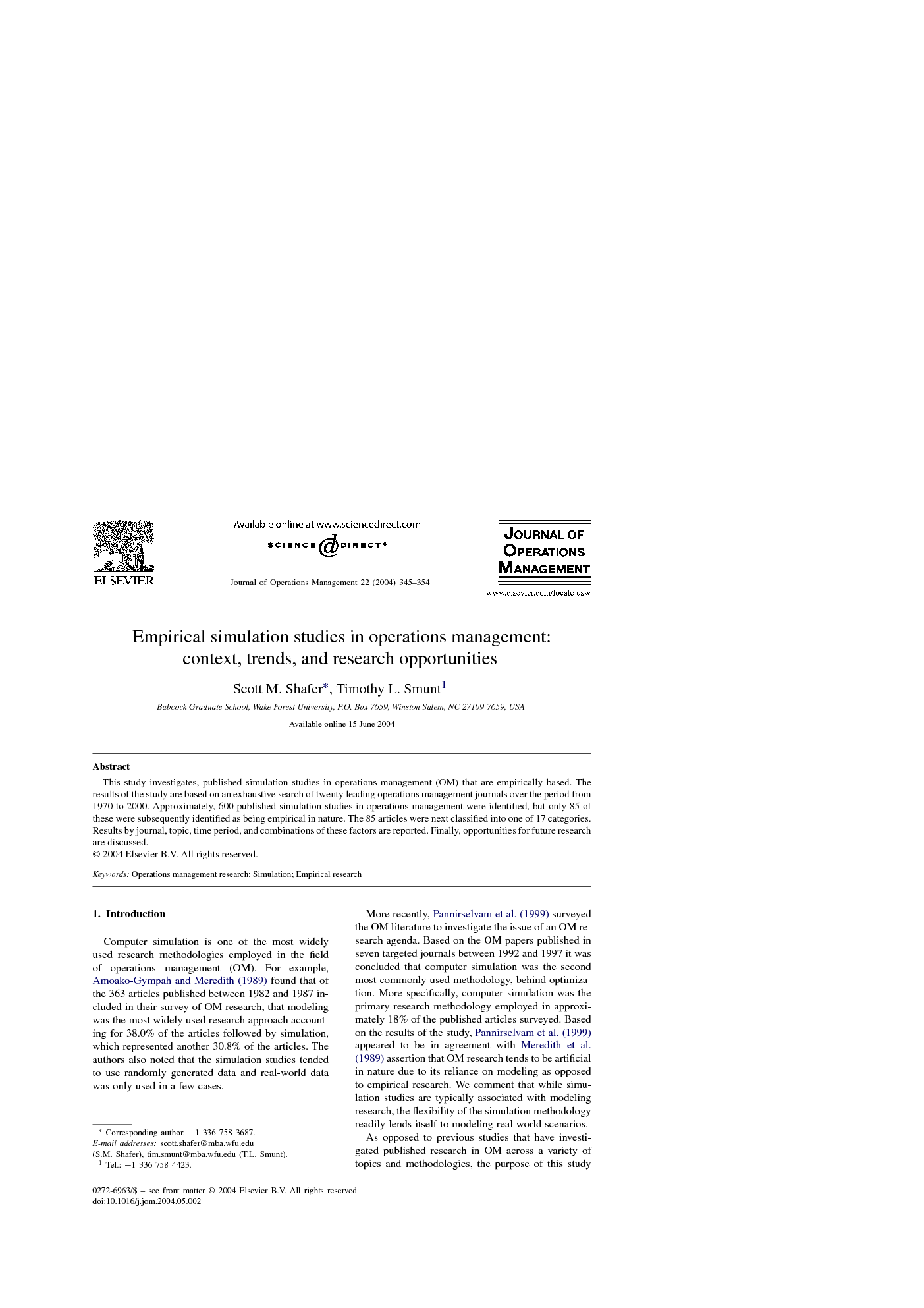 This study investigates, published simulation studies in operations management (OM) that are empirically based. The results of the study are based on an exhaustive search of twenty leading operations management journals over the period from 1970 to 2000. Approximately, 600 published simulation studies in operations management were identified, but only 85 of these were subsequently identified as being empirical in nature. The 85 articles were next classified into one of 17 categories. Results by journal, topic, time period, and combinations of these factors are reported. Finally, opportunities for future research are discussed.

Computer simulation is one of the most widely used research methodologies employed in the field of operations management (OM). For example, Amoako-Gympah and Meredith (1989) found that of the 363 articles published between 1982 and 1987 included in their survey of OM research, that modeling was the most widely used research approach accounting for 38.0% of the articles followed by simulation, which represented another 30.8% of the articles. The authors also noted that the simulation studies tended to use randomly generated data and real-world data was only used in a few cases. More recently, Pannirselvam et al. (1999) surveyed the OM literature to investigate the issue of an OM research agenda. Based on the OM papers published in seven targeted journals between 1992 and 1997 it was concluded that computer simulation was the second most commonly used methodology, behind optimization. More specifically, computer simulation was the primary research methodology employed in approximately 18% of the published articles surveyed. Based on the results of the study, Pannirselvam et al. (1999) appeared to be in agreement with Meredith et al. (1989) assertion that OM research tends to be artificial in nature due to its reliance on modeling as opposed to empirical research. We comment that while simulation studies are typically associated with modeling research, the flexibility of the simulation methodology readily lends itself to modeling real world scenarios. As opposed to previous studies that have investigated published research in OM across a variety of topics and methodologies, the purpose of this study is to focus on the use of a specific research methodology, computer simulation, in operations management research. Specifically, we examine those simulation studies that are empirical in nature, that is they either are modeled to represent specific real situations/environments or data from real situations are used as a basis for setting the levels of key parameters in the simulation study. Our goal is to identify and evaluate past research trends in this area, determine if any gaps exist in this literature, and then based on this insight uncover opportunities for future research. This paper is organized as follows. In the Section 2, relevant research is reviewed. This is followed by a discussion of the research methodology employed in this study. Next, the results from this study are presented, showing the categorization of empirically-based simulation studies over the 30-year period studied. Finally, the paper is concluded and avenues for future research are discussed.