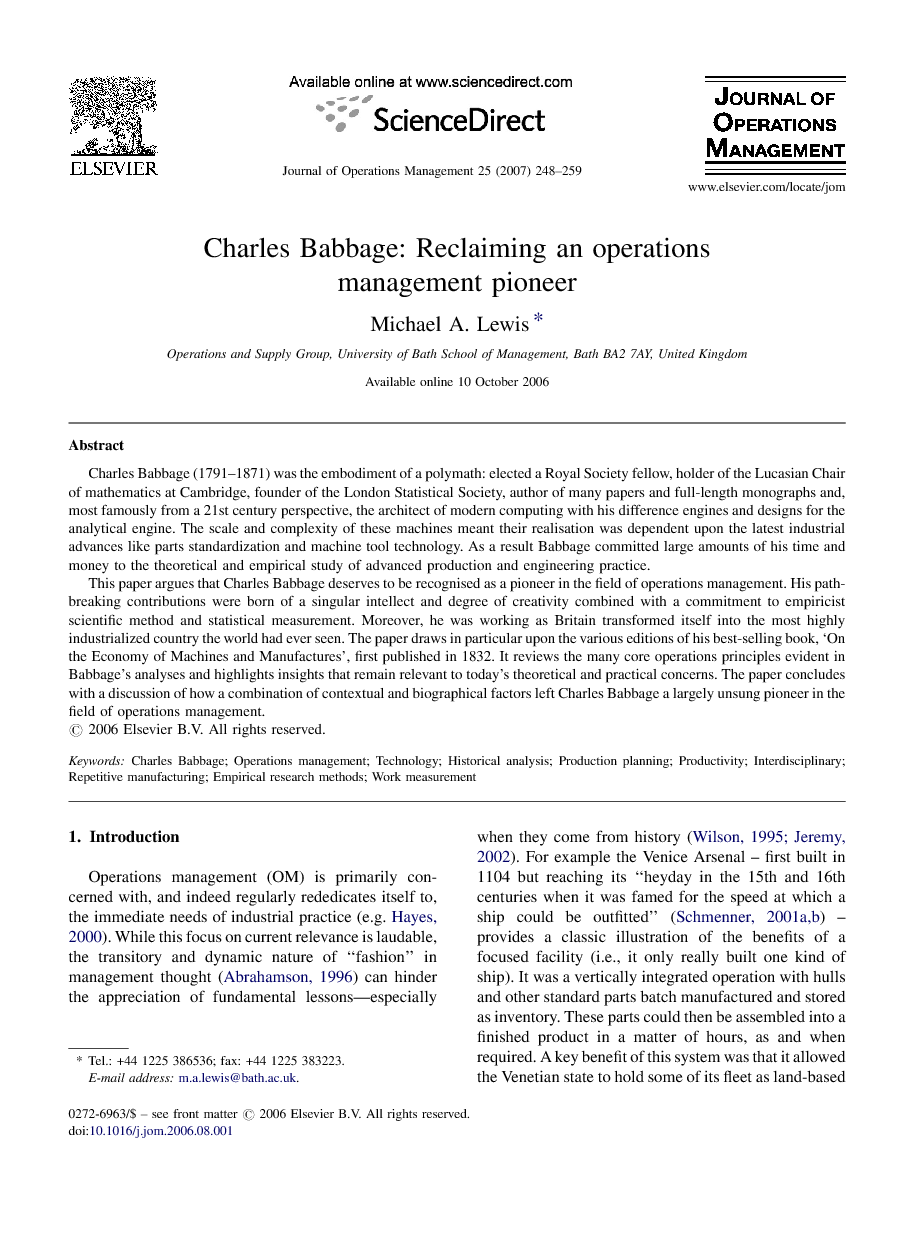 Charles Babbage (1791–1871) was the embodiment of a polymath: elected a Royal Society fellow, holder of the Lucasian Chair of mathematics at Cambridge, founder of the London Statistical Society, author of many papers and full-length monographs and, most famously from a 21st century perspective, the architect of modern computing with his difference engines and designs for the analytical engine. The scale and complexity of these machines meant their realisation was dependent upon the latest industrial advances like parts standardization and machine tool technology. As a result Babbage committed large amounts of his time and money to the theoretical and empirical study of advanced production and engineering practice. This paper argues that Charles Babbage deserves to be recognised as a pioneer in the field of operations management. His path-breaking contributions were born of a singular intellect and degree of creativity combined with a commitment to empiricist scientific method and statistical measurement. Moreover, he was working as Britain transformed itself into the most highly industrialized country the world had ever seen. The paper draws in particular upon the various editions of his best-selling book, ‘On the Economy of Machines and Manufactures’, first published in 1832. It reviews the many core operations principles evident in Babbage's analyses and highlights insights that remain relevant to today's theoretical and practical concerns. The paper concludes with a discussion of how a combination of contextual and biographical factors left Charles Babbage a largely unsung pioneer in the field of operations management.

Operations management (OM) is primarily concerned with, and indeed regularly rededicates itself to, the immediate needs of industrial practice (e.g. Hayes, 2000). While this focus on current relevance is laudable, the transitory and dynamic nature of “fashion” in management thought (Abrahamson, 1996) can hinder the appreciation of fundamental lessons—especially when they come from history (Wilson, 1995 and Jeremy, 2002). For example the Venice Arsenal – first built in 1104 but reaching its “heyday in the 15th and 16th centuries when it was famed for the speed at which a ship could be outfitted” (Schmenner, 2001a and Schmenner, 2001b) – provides a classic illustration of the benefits of a focused facility (i.e., it only really built one kind of ship). It was a vertically integrated operation with hulls and other standard parts batch manufactured and stored as inventory. These parts could then be assembled into a finished product in a matter of hours, as and when required. A key benefit of this system was that it allowed the Venetian state to hold some of its fleet as land-based work-in-process rather than as expensive, maintenance-consuming ships at sea (Lane 1934 and 1973, cited in Schmenner, 2001a and Schmenner, 2001b). There has been historical OM of course: authors have focused upon, for example, relearning the lessons of the American System of Manufacture (e.g. Abernathy and Corcoran, 1983 and Wilson, 1996) and deployed historical anecdote while proposing universal OM theories ( Schmenner and Swink, 1998, Schmenner, 2001a, Schmenner, 2001b and Singhal, 2001). But there has been almost no extended reflection upon those individuals in history who helped to decipher, document and disseminate the emerging operations paradigm. As an illustration although Frederick Winslow Taylor and his Scientific Management principles are now recognised as cornerstones of management theory and practice ( Locke, 1982 and Kanigel, 1997) – Peter Drucker counts Taylor (with Darwin and Freud) as “the trinity often cited as the ‘makers of the modern world’ (Drucker, 1993, p. 31) – Taylor and his work have been subject to only limited OM interest (e.g. Robinson and Robinson, 1994 and Voss, 1995). Likewise, although Charles Babbage is sometimes mentioned (Buffa, 1982, Voss, 1995, Hopp and Spearman, 1995 and Landes, 1999) as an early advocate of “rational … industrial management” (Hobsbawm with Wrigley 1999, p. 101) there has been almost no detailed reflection within OM upon the content and context of his work, nor of the methods he adopted in his scientific investigation of manufactures. It is these gaps that this work seeks to address. Combining a summary of his life and times with a detailed review of his best-selling work, On the Economy of Machinery and Manufactures (1832), this paper sets his content findings in a framework that articulates the enduring relevance of his conclusions to today's OM audience.1 Specifically, a review of the content of Babbage's principles “which pervade a very large portion of all manufactures” is conducted for evidence of core OM principles. From this, the work moves on to highlight those insights which provide a relevant legacy for today's theoretical and practical concerns. The paper concludes by addressing the specific question of why such a pioneer needs rediscovering. In exploring his lack of enduring practical impact, contextual and biographical themes are discussed: first, Babbage's efforts are set against the relative decline, compared with the United States, of the British industrial model and, second, the very polymath brilliance that generated so many insights meant that he normally worked alone on projects and failed to build the “active following” that is crucial when disseminating systemic innovations.