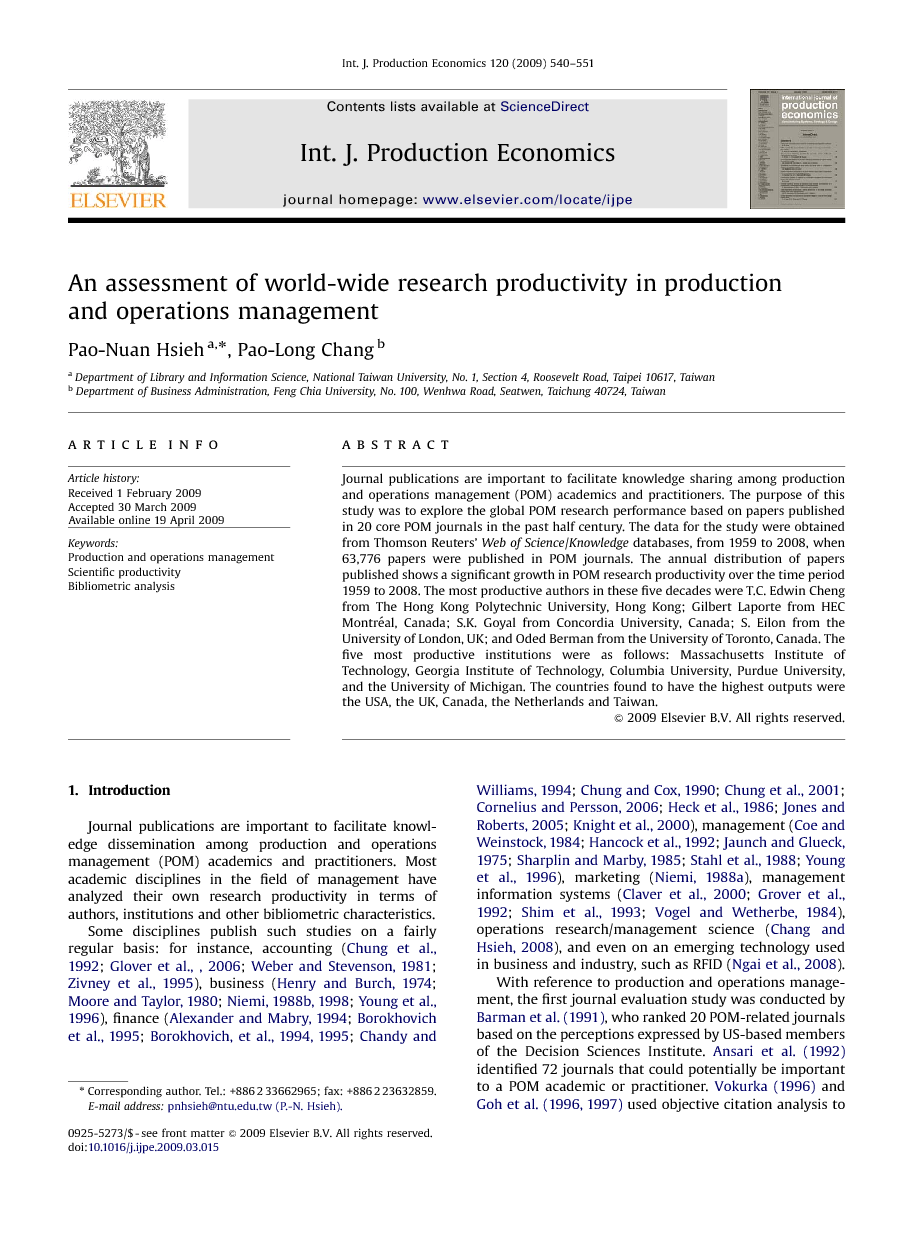 Journal publications are important to facilitate knowledge sharing among production and operations management (POM) academics and practitioners. The purpose of this study was to explore the global POM research performance based on papers published in 20 core POM journals in the past half century. The data for the study were obtained from Thomson Reuters’ Web of Science/Knowledge databases, from 1959 to 2008, when 63,776 papers were published in POM journals. The annual distribution of papers published shows a significant growth in POM research productivity over the time period 1959 to 2008. The most productive authors in these five decades were T.C. Edwin Cheng from The Hong Kong Polytechnic University, Hong Kong; Gilbert Laporte from HEC Montréal, Canada; S.K. Goyal from Concordia University, Canada; S. Eilon from the University of London, UK; and Oded Berman from the University of Toronto, Canada. The five most productive institutions were as follows: Massachusetts Institute of Technology, Georgia Institute of Technology, Columbia University, Purdue University, and the University of Michigan. The countries found to have the highest outputs were the USA, the UK, Canada, the Netherlands and Taiwan.

Journal publications are important to facilitate knowledge dissemination among production and operations management (POM) academics and practitioners. Most academic disciplines in the field of management have analyzed their own research productivity in terms of authors, institutions and other bibliometric characteristics. Some disciplines publish such studies on a fairly regular basis: for instance, accounting (Chung et al., 1992; Glover et al., , 2006; Weber and Stevenson, 1981; Zivney et al., 1995), business (Henry and Burch, 1974; Moore and Taylor, 1980; Niemi, 1988b, 1998; Young et al., 1996), finance (Alexander and Mabry, 1994; Borokhovich et al., 1995; Borokhovich et al., 1994 and Borokhovich et al., 1995; Chandy and Williams, 1994; Chung and Cox, 1990; Chung et al., 2001; Cornelius and Persson, 2006; Heck et al., 1986; Jones and Roberts, 2005; Knight et al., 2000), management (Coe and Weinstock, 1984; Hancock et al., 1992; Jaunch and Glueck, 1975; Sharplin and Marby, 1985; Stahl et al., 1988; Young et al., 1996), marketing (Niemi, 1988a), management information systems (Claver et al., 2000; Grover et al., 1992; Shim et al., 1993; Vogel and Wetherbe, 1984), operations research/management science (Chang and Hsieh, 2008), and even on an emerging technology used in business and industry, such as RFID (Ngai et al., 2008). With reference to production and operations management, the first journal evaluation study was conducted by Barman et al. (1991), who ranked 20 POM-related journals based on the perceptions expressed by US-based members of the Decision Sciences Institute. Ansari et al. (1992) identified 72 journals that could potentially be important to a POM academic or practitioner. Vokurka (1996) and Goh et al., 1996 and Goh et al., 1997 used objective citation analysis to determine the relative importance of various POM journals. Young et al. (1996) represented the first attempt at ranking the POM research productivity of individuals and business schools in the USA, according to the number and quality of articles published in the Barman et al. (1991) list of POM-related journals during the period 1989–1993. Malhotra and Kher (1996) classified institutional research productivity in terms of the total number of articles and pages published in the top five journals in the Barman list. These journals included Management Science, Decision Sciences, Journal of Operations Management, IIE Transactions, and International Journal of Production Research. Soteriou et al. (1999) presented rankings of the publication outlets in the five most highly ranked POM-related journals as perceived by POM researchers in Europe, and commented on the differences between European and US academics. In 2001, Barman et al. conducted a 10-year update to re-establish the ranking of those POM journals surveyed by Barman et al. (1991) and to capture changes in stakeholder perceptions that might have taken place in the previous decade. Olson (2005) obtained quality ratings and rankings of 39 journals in operations management and related disciplines through surveys of faculty members at the top 25 US business schools in both 2000 and 2002. Hadjinicola and Soteriou (2006) identified factors that promote the research productivity of groups of POM researchers in US business schools and noted three factors that increase both research productivity and the quality of articles published: (a) the presence of a POM research center, (b) funding received from external sources for research purposes, and (c) better library facilities. Jiang et al. (2007) examined the stream of China-related POM research over 1980–2005 to determine trends in quantity, topical coverage, and data sources. While much has been written on POM, an extensive and longitudinal literature review is still lacking. Following the evolution and growth of the field of production and operations management, a number of studies have recently appeared that provide insights into the assessment of the research productivity of individual researchers and departments in academic institutions. Most of these studies focused their efforts on US and European academics, and excluded both non-US and non-European/Europe researchers. In this study we contribute to the trend towards globalized research efforts in the POM discipline in the past half-century.

The USA was the most productive country in terms of absolute number of publications in POM. However, when normalized to population size, smaller affluent countries, such as Israel, Hong Kong, Singapore, and the Netherlands were more productive (Table 11). In the last 10 years, the largest increases in research productivity related to POM were found in Taiwan, Hong Kong, Spain and Germany. The study only analyzed publications in English, because it is well known that English is the international scientific language. ISI databases mainly include journals in the English language, and this renders it difficult for journals in other languages to attain a high level of impact. Moreover, it is interesting to observe that when we determine research production in relation to population size, the four leaders are not English-speaking countries. The supremacy of small North-European countries when publications are considered in terms of population size is a well-known fact (May, 1997). This finding generally concurs with Young, Baird and Pullman's work, while it generally contradicts Malhotra and Kher's work. More significant is the finding that a large percentage of institutions with the highest levels of productivity in POM research are outside the USA. This finding conflicts heavily with the findings of Malhotra and Kher; the other two studies were intentionally constrained to US institutions. Upon further analysis, this latter finding may be attributed to a trend toward the globalization of research efforts in the POM discipline. Given that only 20 POM journals were considered, this analysis lacks the ability to guarantee an exhaustive collection of all relevant POM articles. However, the authors believe that a large majority of relevant articles were found. The resulting final set of 63,776 articles provides a sufficient sample to reasonably investigate research productivity.