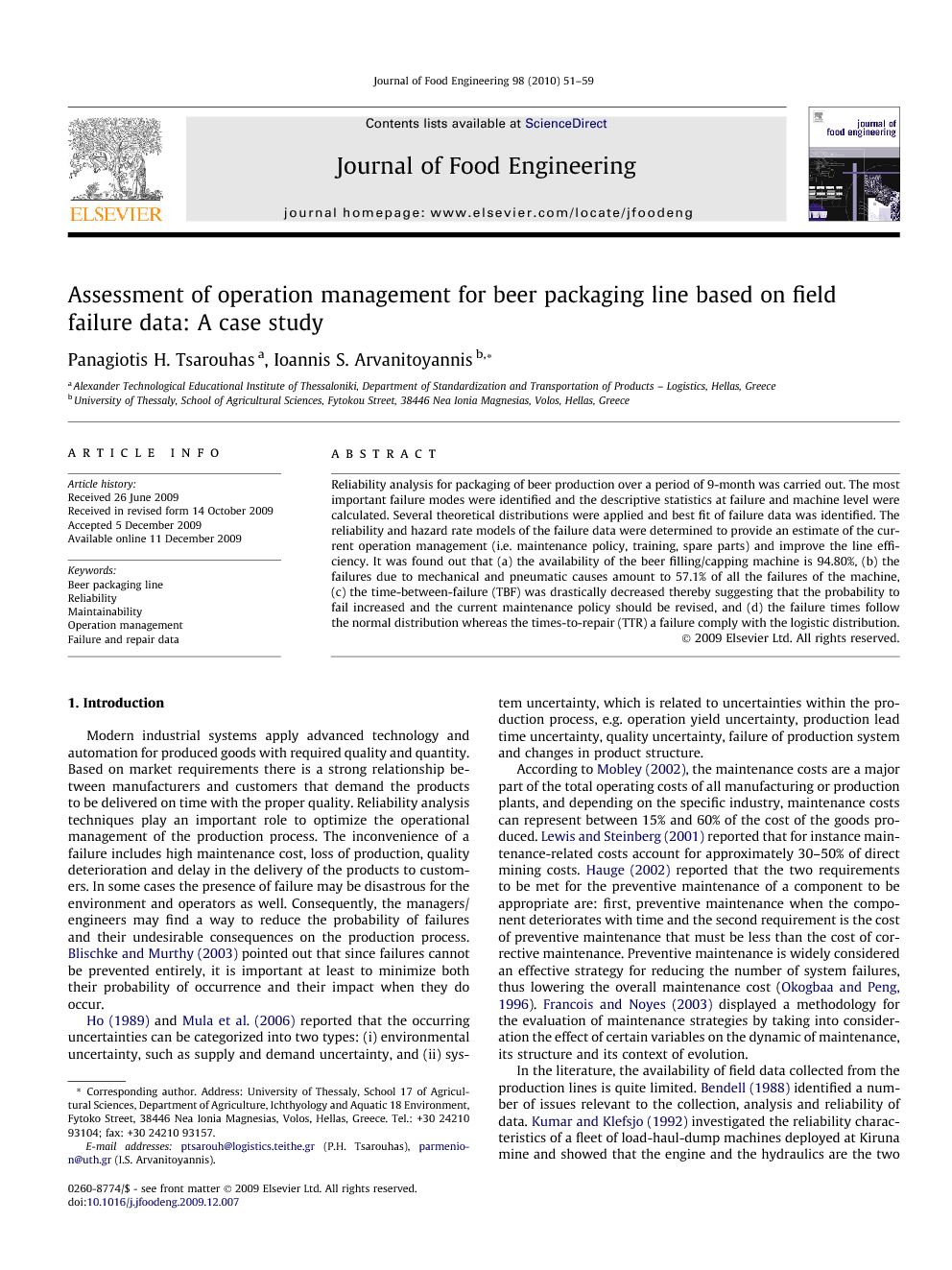 Reliability analysis for packaging of beer production over a period of 9-month was carried out. The most important failure modes were identified and the descriptive statistics at failure and machine level were calculated. Several theoretical distributions were applied and best fit of failure data was identified. The reliability and hazard rate models of the failure data were determined to provide an estimate of the current operation management (i.e. maintenance policy, training, spare parts) and improve the line efficiency. It was found out that (a) the availability of the beer filling/capping machine is 94.80%, (b) the failures due to mechanical and pneumatic causes amount to 57.1% of all the failures of the machine, (c) the time-between-failure (TBF) was drastically decreased thereby suggesting that the probability to fail increased and the current maintenance policy should be revised, and (d) the failure times follow the normal distribution whereas the times-to-repair (TTR) a failure comply with the logistic distribution.

Modern industrial systems apply advanced technology and automation for produced goods with required quality and quantity. Based on market requirements there is a strong relationship between manufacturers and customers that demand the products to be delivered on time with the proper quality. Reliability analysis techniques play an important role to optimize the operational management of the production process. The inconvenience of a failure includes high maintenance cost, loss of production, quality deterioration and delay in the delivery of the products to customers. In some cases the presence of failure may be disastrous for the environment and operators as well. Consequently, the managers/engineers may find a way to reduce the probability of failures and their undesirable consequences on the production process. Blischke and Murthy (2003) pointed out that since failures cannot be prevented entirely, it is important at least to minimize both their probability of occurrence and their impact when they do occur. Ho (1989) and Mula et al. (2006) reported that the occurring uncertainties can be categorized into two types: (i) environmental uncertainty, such as supply and demand uncertainty, and (ii) system uncertainty, which is related to uncertainties within the production process, e.g. operation yield uncertainty, production lead time uncertainty, quality uncertainty, failure of production system and changes in product structure. According to Mobley (2002), the maintenance costs are a major part of the total operating costs of all manufacturing or production plants, and depending on the specific industry, maintenance costs can represent between 15% and 60% of the cost of the goods produced. Lewis and Steinberg (2001) reported that for instance maintenance-related costs account for approximately 30–50% of direct mining costs. Hauge (2002) reported that the two requirements to be met for the preventive maintenance of a component to be appropriate are: first, preventive maintenance when the component deteriorates with time and the second requirement is the cost of preventive maintenance that must be less than the cost of corrective maintenance. Preventive maintenance is widely considered an effective strategy for reducing the number of system failures, thus lowering the overall maintenance cost (Okogbaa and Peng, 1996). Francois and Noyes (2003) displayed a methodology for the evaluation of maintenance strategies by taking into consideration the effect of certain variables on the dynamic of maintenance, its structure and its context of evolution. In the literature, the availability of field data collected from the production lines is quite limited. Bendell (1988) identified a number of issues relevant to the collection, analysis and reliability of data. Kumar and Klefsjo (1992) investigated the reliability characteristics of a fleet of load-haul-dump machines deployed at Kiruna mine and showed that the engine and the hydraulics are the two most critical subsystems. Furthermore, maintenance data for 2 years for these machines are analyzed. Barabady and Kumar (2008) published a case study describing reliability and availability analysis of the crushing plant 3 at Jajarm Bauxite Mine in Iran; the reliability analysis was shown to be very effective for deciding maintenance intervals. Bendell and Walls (1985) outlined some of the data analysis procedures that should be carried out in the initial consideration of any reliability time-between-failure and repair time data. Information gathered with such an approach may prove invaluable in providing an insight into equipment behaviour and highlighting problems which might otherwise remain unnoticed. Jones and Hayes (1997) reported a methodology to collect field reliability data and analysis for identifying problems in manufacturing, design and screening. Only a very limited number of publications related to food industry are available in this field. Liberopoulos and Tsarouhas (2002) reported a case study of speeding up a croissant production line, based on actual data collected over 10 months, by inserting an in-process buffer in the middle of the line to absorb some of the downtime, based on the simplifying assumption that the failure and repair times of the workstations of the lines have exponential distributions. Furthermore, Liberopoulos and Tsarouhas (2005) displayed a statistical analysis of failure data of an automated pizza production line. The analysis included identification of failures, computation of statistics of the failure data, and parameters of the theoretical distributions that best fit the data, and investigation of the existence of autocorrelations and cross correlations in the failure. Tsarouhas et al., 2009 developed a reliability and maintainability analysis of strudel production line, and descriptive statistics of the failure and repair data was carried out and the best fitness index parameters were determined. Moreover, Tsarouhas et al. (in press) investigated reliability, availability and maintainability (RAM) analysis of the cheese production line over a period of 17 months, and the best fit of the failure and repair data between the common theoretical distributions was found and the respective parameters were computed. In this study reliability analysis for beer packaging line over a period of 9-months was carried out. The most important failure modes were identified and the descriptive statistics at failure and machine level were elaborated. The best fit of failure data for several theoretical distributions was determined and the respective parameters were computed. The reliability and hazard rate models of the failure data were determined in order to assess the current operation management (i.e. maintenance policy, training, spare parts) and improve the production line efficiency. The aim of this paper is to provide a valid reliability and maintainability model for food product machinery manufacturers, who target to optimize the design and operation of their packaging production lines

The main research findings can be summarized as follows: (a) The availability of the beer filling/capping machine is 94.80%, and should be optimized with an adequate operation management. The mean TBF is 73.8766 h whereas the mean TTR is about 4 h. (b) To improve the reliability of the machine efforts, attention should be firstly focused on Fm.1 (mechanical), and secondly on Fm.2 (pneumatic) that have the major number of failures. Furthermore, they comprise the 57.1% of all the failures of the machine. (c) The failure times follow the normal distribution whereas the time-to-repair (TTR) a failure comply with the logistic distribution. The location parameter μ of the normal distribution represents the mean time-to-failure of the machine. Therefore, the larger the μ, the larger the mean life of the machine, meaning greater productivity. (d) The time-between-failure (TBF) greatly increased probability to fail with time, thus requiring urgently revision of the current corrective maintenance policy. Therefore, the beer filling/capping machine is in wear-out state because of the drastic increase in the failure rate. This is caused by fatigue, aging, corrosion or friction of certain components of the machine. To avoid the inconvenient impact of the failures on the production process, it is strongly recommended to upgrade the operation management i.e. preventive/proactive maintenance programs, parts replacement decisions, training programs for technicians/operators, spare parts requirement, etc.