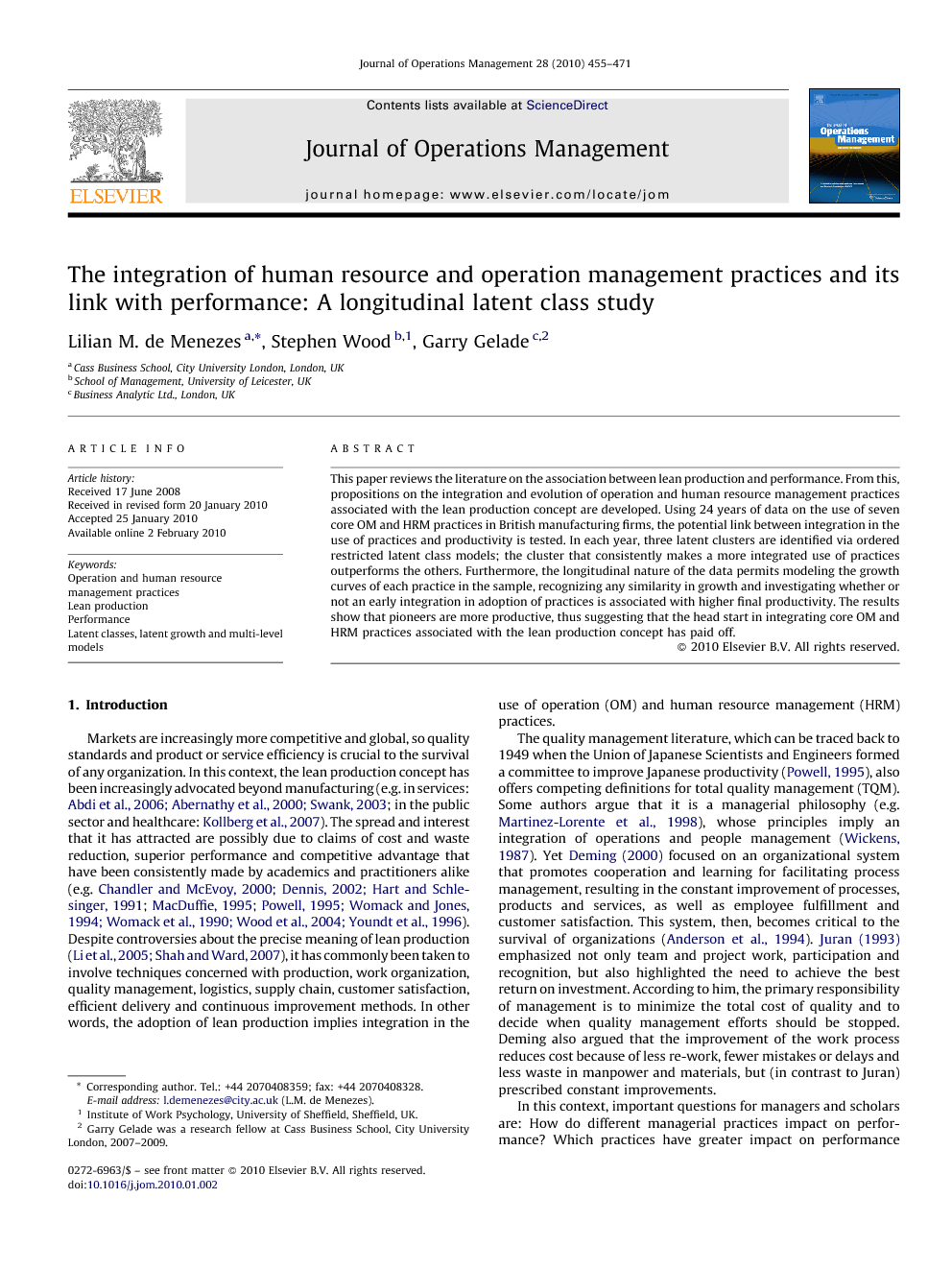 This paper reviews the literature on the association between lean production and performance. From this, propositions on the integration and evolution of operation and human resource management practices associated with the lean production concept are developed. Using 24 years of data on the use of seven core OM and HRM practices in British manufacturing firms, the potential link between integration in the use of practices and productivity is tested. In each year, three latent clusters are identified via ordered restricted latent class models; the cluster that consistently makes a more integrated use of practices outperforms the others. Furthermore, the longitudinal nature of the data permits modeling the growth curves of each practice in the sample, recognizing any similarity in growth and investigating whether or not an early integration in adoption of practices is associated with higher final productivity. The results show that pioneers are more productive, thus suggesting that the head start in integrating core OM and HRM practices associated with the lean production concept has paid off.

The operations management field covers a wide range of subjects from specific areas such as inventory and scheduling, to much broader interrelated areas such as lean and supply chain management. Table 1 briefly shows the subject areas under operations management (OM). It is generally understood that, to teach effectively, each of these subject areas should apply different teaching approaches, given the differences in scope and content. Moreover, it is particular important that an OM taught course can represent some ways for students to directly gain experience in industrial management practice. For example, inventory subject which involves more quantitative modelling is best taught through simulation or tutorials; whereas, supply chain or lean management could be best taught using case studies and games, in addition to the traditional lectures. Using simulation games to complement traditional lectures for enhancing students’ learning have been advocated by many researchers (Kiili, 2005 and Tan, 2007). Games make students become more explicit about what they are doing, seeing, and hearing (Dill & Doppelt, 1963). Learning through games becomes an interactive way to deliver knowledge (Gosen and Washbush, 2004 and Tompson and Dass, 2000). Students are pulled into the learning process and encouraged to participate through an interactive environment (Gosen and Washbush, 2004, Proserpio and Gioia, 2007, Randel et al., 1992 and Zantow et al., 2005). Due to the rapid development in networking technologies, web-based games have been developed in educational aspect (Kiili, 2005 and Wang, 2008). There are studies which demonstrate that the use of computer games can improve thinking (Aliya, 2002 and Virvou et al., 2005) and can create a new learning culture that corresponds better with students’ habits and interest (Prensky, 2001). Moreover, web-based games construct a sense of competition among students (Siddiqui, Khan, & Akhtar, 2008) and deliver a compelling experience is what wins, where the best combination of game play, learning methodology and “eye candy” is what is being sought (Prensky, 2001). In the OM field, there are a number of simulation games, including computer or board games, such as beer game (Cantor & Macdonald, in press), Quality Dice Game, Buckingham JIT game (see Table 2) that are popular and widely adopted for teaching operations management concepts. However, each of these games tends to focus on specific areas. For example, beer game is mainly used to illustrate the bullwhip effect but not for explaining the differences between push versus pull production system. A typical general OM module will involve twelve lectures, and usually includes all the subject areas listed in Table 1. Thus, to complement an OM module teaching with interactive learning approaches, an academic may need to have 7–8 different games. Moreover, there are three different levels of students, i.e. undergraduate, postgraduate and executives. All of them have different level of understanding in OM. Therefore, it may not be appropriate to use a same set of game materials for all level of students. Clearly, the issues faced by OM academics in using simulation gaming in classroom teaching are: • Preparation time – preparation time to understand different simulation games may take up considerable chunk of an academic teaching time ( Chang et al., 2003 and Tan, 2007). • Resources – having a handful of simulation games, either developed in-house or from commercial packages could amount to quite a significant cost that most departments may be unable to support (Damron, 2008). • Level of knowledge – effort and time required to ‘tailor’ existing games to suit various students’ levels may be too complex for academics to handle, even if they are familiar with the games ( Peters and Vissers, 2004 and Roberts, 1974). There is a balance struck between the quality of teaching and cost/time constraint, the number of simulation games required for an OM course and how to customise various OM games to match students’ levels? (King, 1973, Thavikulwat, 2004 and Thiagarajan and Pasigna, 1985). Having the flexibility to use the same set of simulation games to teach various students’ levels, as well as reducing preparation time and costs would be beneficial to academics. For example, having the same set of simulation games to illustrate various OM elements which can be used for different students from undergraduate to executives would be useful to academics. It will significantly reduce the resource requirements and preparation time (a single game versus many games) (Damron, 2008). In light of this, this paper proposes the development of a plug and play (PnP) based interactive classroom game to enhance students learning. A PnP platform allows existing games to be expanded or customised to meet various teaching requirements. In the long term, the proposed PnP game would provide virtual environments that allow students to explore beyond boundaries of given material, and encourage students to become a self-reliant learner (Dede, 2004). The aim is to eliminate the learning and resource overheads required to run different simulation games. The proposed PnP concept is not about relying on software’s properties to configure game play (Thavikulwat, 2004). Rather it is about scalability in game design, providing a platform to allow games to be configured to meet different teaching needs. This paper reports the experiment results and discusses the implications of this study on classroom teaching. The paper has 3 sections. Firstly, the PnP concept is explained. Then, the game pathway and research methodology are described. Finally, preliminary results in using the PnP games in classroom teaching are discussed and future works explained.

The positive feedback from students indicates that the PnP interactive game approach to classroom teaching is effective and feasible. The simulation games are very close to real-life working. The majority of the students never work in a production line. Many situations and problems cannot be imagined (by students) without working in such an environment. PnP lean game provides an environment to allow students to feel involved a production line and learn lean concepts progressively in different stages. The results also point out three characteristics of the PnP gaming pathway approach. • Making thinking visible – the PnP games make students be more explicit about what they are doing, seeing, and hearing. In addition, it gives them quick feedback about the quality of their decisions. • Making knowledge accessible – the game pathway configuration features allow students to be first introduced to the simplest concepts and then proceeds through increasingly complicated challenges. Each new level/pathway can involve developing new game relevant abilities. These challenges are often arranged so students have a strong sense of progressive learning. • Problem-based learning – the game configuration will hide some bottlenecks in process and redundant procedures in the simulation. Students are encouraged to analysis their workflow by drawing some analysis chart to figure out the problems. They are motivated by revising the taught theory during the game play. The initial testing results indicate that the professional/teaching content of the PnP games could be progressive throughout the OM study, starting with the focus on ‘concepts’ at 1st semester, followed by ‘tools/techniques’ at 2nd semester, and the ‘application’ at 3rd semester. For example, if the game’s purpose is to introduce novice students to new ideas through the process of self-discovery, the teacher configures the simulation for team play with a single level of difficulty. Whereas, if the purpose is to provide students an opportunity to practice newly taught lean techniques, teachers can configure it for solo play with increasing levels of difficulty as performance targets are reached. The PnP game supports this learning progression. It is anticipated that the developed digital games would provide the following benefits: (a) Students – a ‘risk’ free environment where they could learn through trial and error without worry of being penalised. (b) School/university – an effective, low cost and sustainable digital game that could be rolled out rapidly to other users and subject areas. So far, we have successfully tested the prototype PnP platform with only one game, i.e. lean game. Data from the prototype testing will be carefully analysed. Knowledge and lessons learnt from the initial testing will be used to develop a fully fledged interactive PnP game platform. The PnP platform and the developed game would be extended to a web-based competition game. The developed game would have a set of ‘games’ which could be customised to teach operations management in various settings and principles.