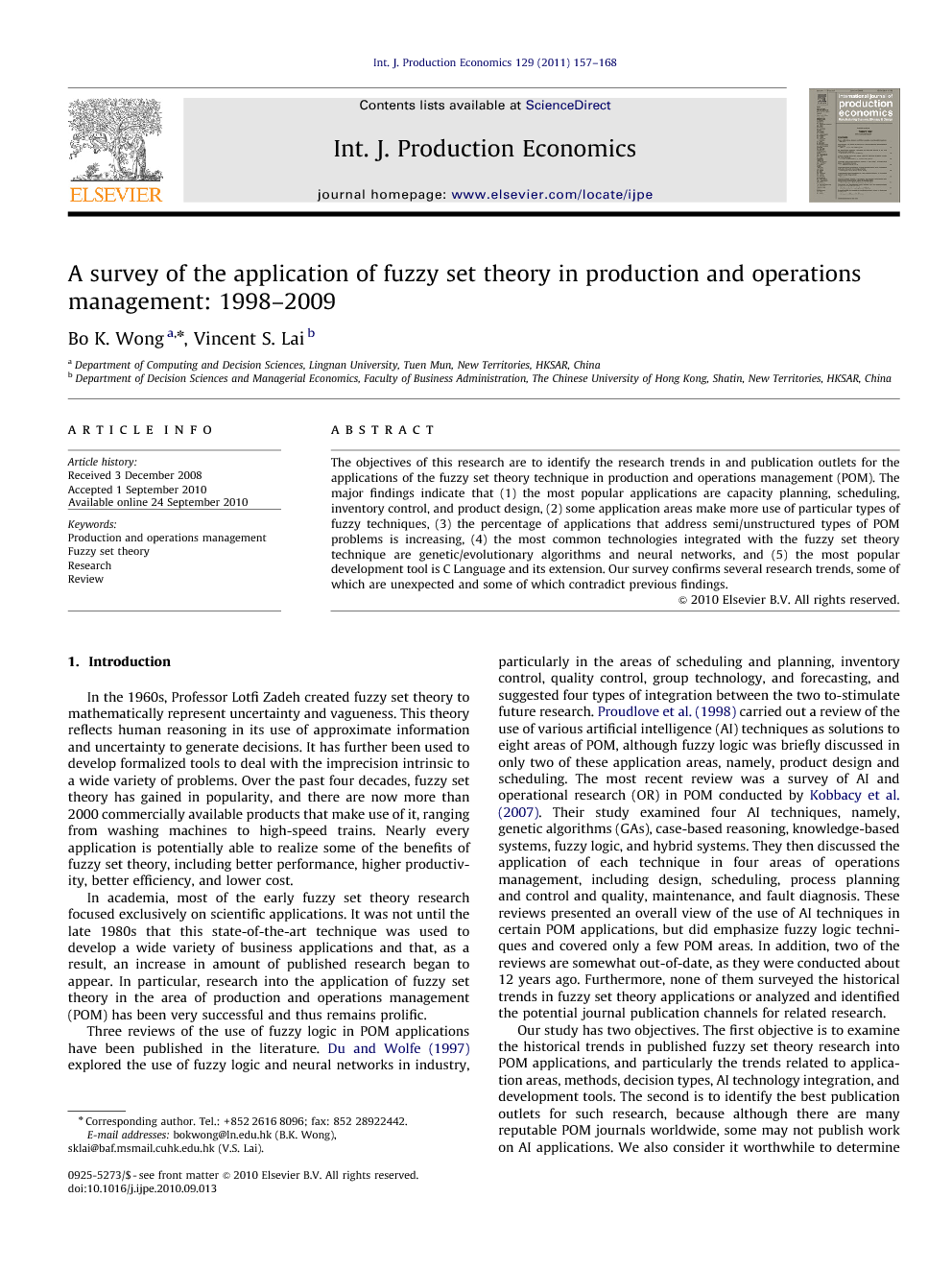 The objectives of this research are to identify the research trends in and publication outlets for the applications of the fuzzy set theory technique in production and operations management (POM). The major findings indicate that (1) the most popular applications are capacity planning, scheduling, inventory control, and product design, (2) some application areas make more use of particular types of fuzzy techniques, (3) the percentage of applications that address semi/unstructured types of POM problems is increasing, (4) the most common technologies integrated with the fuzzy set theory technique are genetic/evolutionary algorithms and neural networks, and (5) the most popular development tool is C Language and its extension. Our survey confirms several research trends, some of which are unexpected and some of which contradict previous findings.

In the 1960s, Professor Lotfi Zadeh created fuzzy set theory to mathematically represent uncertainty and vagueness. This theory reflects human reasoning in its use of approximate information and uncertainty to generate decisions. It has further been used to develop formalized tools to deal with the imprecision intrinsic to a wide variety of problems. Over the past four decades, fuzzy set theory has gained in popularity, and there are now more than 2000 commercially available products that make use of it, ranging from washing machines to high-speed trains. Nearly every application is potentially able to realize some of the benefits of fuzzy set theory, including better performance, higher productivity, better efficiency, and lower cost. In academia, most of the early fuzzy set theory research focused exclusively on scientific applications. It was not until the late 1980s that this state-of-the-art technique was used to develop a wide variety of business applications and that, as a result, an increase in amount of published research began to appear. In particular, research into the application of fuzzy set theory in the area of production and operations management (POM) has been very successful and thus remains prolific. Three reviews of the use of fuzzy logic in POM applications have been published in the literature. Du and Wolfe (1997) explored the use of fuzzy logic and neural networks in industry, particularly in the areas of scheduling and planning, inventory control, quality control, group technology, and forecasting, and suggested four types of integration between the two to-stimulate future research. Proudlove et al. (1998) carried out a review of the use of various artificial intelligence (AI) techniques as solutions to eight areas of POM, although fuzzy logic was briefly discussed in only two of these application areas, namely, product design and scheduling. The most recent review was a survey of AI and operational research (OR) in POM conducted by Kobbacy et al. (2007). Their study examined four AI techniques, namely, genetic algorithms (GAs), case-based reasoning, knowledge-based systems, fuzzy logic, and hybrid systems. They then discussed the application of each technique in four areas of operations management, including design, scheduling, process planning and control and quality, maintenance, and fault diagnosis. These reviews presented an overall view of the use of AI techniques in certain POM applications, but did emphasize fuzzy logic techniques and covered only a few POM areas. In addition, two of the reviews are somewhat out-of-date, as they were conducted about 12 years ago. Furthermore, none of them surveyed the historical trends in fuzzy set theory applications or analyzed and identified the potential journal publication channels for related research. Our study has two objectives. The first objective is to examine the historical trends in published fuzzy set theory research into POM applications, and particularly the trends related to application areas, methods, decision types, AI technology integration, and development tools. The second is to identify the best publication outlets for such research, because although there are many reputable POM journals worldwide, some may not publish work on AI applications. We also consider it worthwhile to determine whether some journals prefer to publish articles on certain types of POM applications. By definition, fuzzy set theory encompasses fuzzy logic, fuzzy arithmetic, fuzzy mathematical programming, fuzzy topology, fuzzy graph theory, and fuzzy data analysis. As our surveyed applications cover all of these techniques, the collective term “fuzzy set theory” is used throughout this article, although “fuzzy logic” alone is often used in the literature. The remainder of this paper begins in Section 2 presenting the data collection method that we adopted to gather information on the published fuzzy set theory applications in the POM literature, including a list of the journals surveyed. Section 3 discusses our classification scheme and the approach used to classify and organize the identified applications. Section 4 provides the results of these classifications, including the historical trends in the main classification categories. A discussion of our findings is presented in Section 5. Section 6 sets out the limitations of the study and makes suggestions for future work. A summary and conclusions are presented in Section 7.

This research has surveyed 402 articles published in leading POM and business journals between 1998 and 2009 on the application of fuzzy set theory techniques in different areas of POM. The main findings can be summarized as follows: (1) There has been an increase in the number of applications of fuzzy set theory in POM, with the most popular areas of application being long-term capacity planning, short-term capacity planning, inventory control, product design, aggregate planning, and scheduling. (2) No one type of fuzzy technique is used in POM applications, but some application areas make more use of particular techniques. (3) There has been an increase in the percentage of applications that address semi/unstructured types of POM problems. (4) There has been an increase in the number and percentage of applications that integrate the fuzzy set theory technique with different types of AI technologies, the most common of which are genetic or evolutionary algorithms and neural networks. (5) The use of C and its extension for the development of applications has increased over the past 12 years, but no popular fuzzy set theory software package has been developed specifically for POM applications. (6) The largest number of applications appears in the International Journal of Production Research, the European Journal of Operational Research, Computers and Industrial Engineering, and the International Journal of Production Economics. (7) Most of the research was carried out in universities, and there have been very few joint research projects conducted by professors and practitioners. Our survey identifies several trends, some of which are unexpected and some of which contradict past findings. It is hoped that the results of this study will highlight the importance of fuzzy set theory in POM, offer insights into its current role in various POM applications, provide valuable information about publication channels, and ultimately stimulate the research interest of both academicians and practitioners in this area.