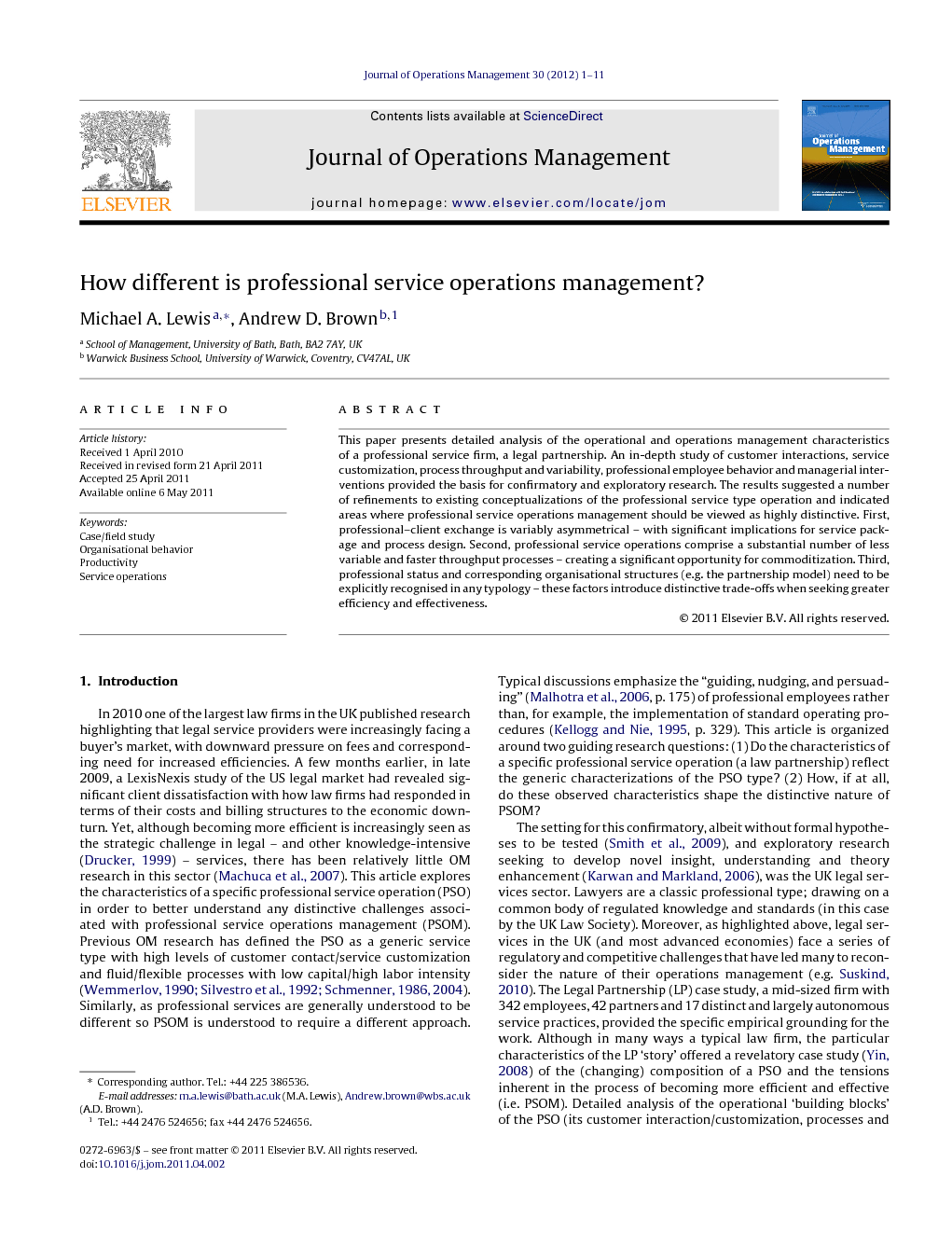 This paper presents detailed analysis of the operational and operations management characteristics of a professional service firm, a legal partnership. An in-depth study of customer interactions, service customization, process throughput and variability, professional employee behavior and managerial interventions provided the basis for confirmatory and exploratory research. The results suggested a number of refinements to existing conceptualizations of the professional service type operation and indicated areas where professional service operations management should be viewed as highly distinctive. First, professional–client exchange is variably asymmetrical – with significant implications for service package and process design. Second, professional service operations comprise a substantial number of less variable and faster throughput processes – creating a significant opportunity for commoditization. Third, professional status and corresponding organisational structures (e.g. the partnership model) need to be explicitly recognised in any typology – these factors introduce distinctive trade-offs when seeking greater efficiency and effectiveness.

In 2010 one of the largest law firms in the UK published research highlighting that legal service providers were increasingly facing a buyer's market, with downward pressure on fees and corresponding need for increased efficiencies. A few months earlier, in late 2009, a LexisNexis study of the US legal market had revealed significant client dissatisfaction with how law firms had responded in terms of their costs and billing structures to the economic downturn. Yet, although becoming more efficient is increasingly seen as the strategic challenge in legal – and other knowledge-intensive (Drucker, 1999) – services, there has been relatively little OM research in this sector (Machuca et al., 2007). This article explores the characteristics of a specific professional service operation (PSO) in order to better understand any distinctive challenges associated with professional service operations management (PSOM). Previous OM research has defined the PSO as a generic service type with high levels of customer contact/service customization and fluid/flexible processes with low capital/high labor intensity (Wemmerlov, 1990, Silvestro et al., 1992, Schmenner, 1986 and Schmenner, 2004). Similarly, as professional services are generally understood to be different so PSOM is understood to require a different approach. Typical discussions emphasize the “guiding, nudging, and persuading” (Malhotra et al., 2006, p. 175) of professional employees rather than, for example, the implementation of standard operating procedures (Kellogg and Nie, 1995, p. 329). This article is organized around two guiding research questions: (1) Do the characteristics of a specific professional service operation (a law partnership) reflect the generic characterizations of the PSO type? (2) How, if at all, do these observed characteristics shape the distinctive nature of PSOM? The setting for this confirmatory, albeit without formal hypotheses to be tested (Smith et al., 2009), and exploratory research seeking to develop novel insight, understanding and theory enhancement (Karwan and Markland, 2006), was the UK legal services sector. Lawyers are a classic professional type; drawing on a common body of regulated knowledge and standards (in this case by the UK Law Society). Moreover, as highlighted above, legal services in the UK (and most advanced economies) face a series of regulatory and competitive challenges that have led many to reconsider the nature of their operations management (e.g. Suskind, 2010). The Legal Partnership (LP) case study, a mid-sized firm with 342 employees, 42 partners and 17 distinct and largely autonomous service practices, provided the specific empirical grounding for the work. Although in many ways a typical law firm, the particular characteristics of the LP ‘story’ offered a revelatory case study (Yin, 2008) of the (changing) composition of a PSO and the tensions inherent in the process of becoming more efficient and effective (i.e. PSOM). Detailed analysis of the operational ‘building blocks’ of the PSO (its customer interaction/customization, processes and employee behavior) and managerial attempts to influence these elements provided a persuasive example (Siggelkow, 2007) for answering the research questions. The results suggest that (in legal services) the extent of client interaction and service package customization is highly variable – with numerous examples of professionals deliberately distancing themselves from their clients. Similarly, the majority of LP processes were not necessarily slow and highly variable (and where these characteristics did appear to hold, individual professional inputs played at least as significant a role as customer inputs). The study also highlighted distinctive aspects of PSOM by suggesting a more contingent perspective on professional–client exchange and articulating specific OM trade-off's associated with professionals and partnership structures.

This confirmatory and exploratory study set out to investigate the definitional characteristics of the PSO and the distinctive aspects of PSOM. The single case structure has obvious limitations but the rich description of operations-related issues at a single professional service firm provided a robust platform for generalizing to theory. Although not endorsing the suggestion that scholars should never “generalize the characteristics of services” (Edvardsson et al., 2005, p. 115) what was observed suggests that OM scholars can fruitfully develop much more precise definitional model(s) of various professional service operations. Even within a single law firm for instance, the nature of client interaction was varied and contingent on a range of factors. Similarly, it is clear from the observed (managing and managed) behaviors that there is a greater degree of contingency in any model of PSOM than that suggested by the agreement in the literature that professionals cannot be effectively ‘managed’ in the same way as other employees. In other words, the case confirms that the PSO is a “distinct environment for managing operations” (Goodale et al., 2008, p. 670) but the definitional PSOM challenge is not simply to nudge and influence culture but to try to enact mainstream OM options in a context where professional and organisational factors can act to undermine even the most robust efficiency logic. The findings from this research point to the importance of investigating specific professional contexts. Extending the range and number of different PSOs (different professions, organisational structures, countries, sizes, etc.) will clearly enhance the validity and, crucially, generalizability of any findings. More specifically, the LP case suggests that there is significant potential for traditional OM ‘interventions’ in legal service processes (e.g. make versus buy analysis leading to outsourcing) but that these opportunities need to be understood in the context of significant inertial forces (e.g. professionals ‘giving up’ certain activities). One potential component of a more comprehensive PSOM research agenda therefore, could be to investigate the detailed design, redesign and exit/transfer of such processes.