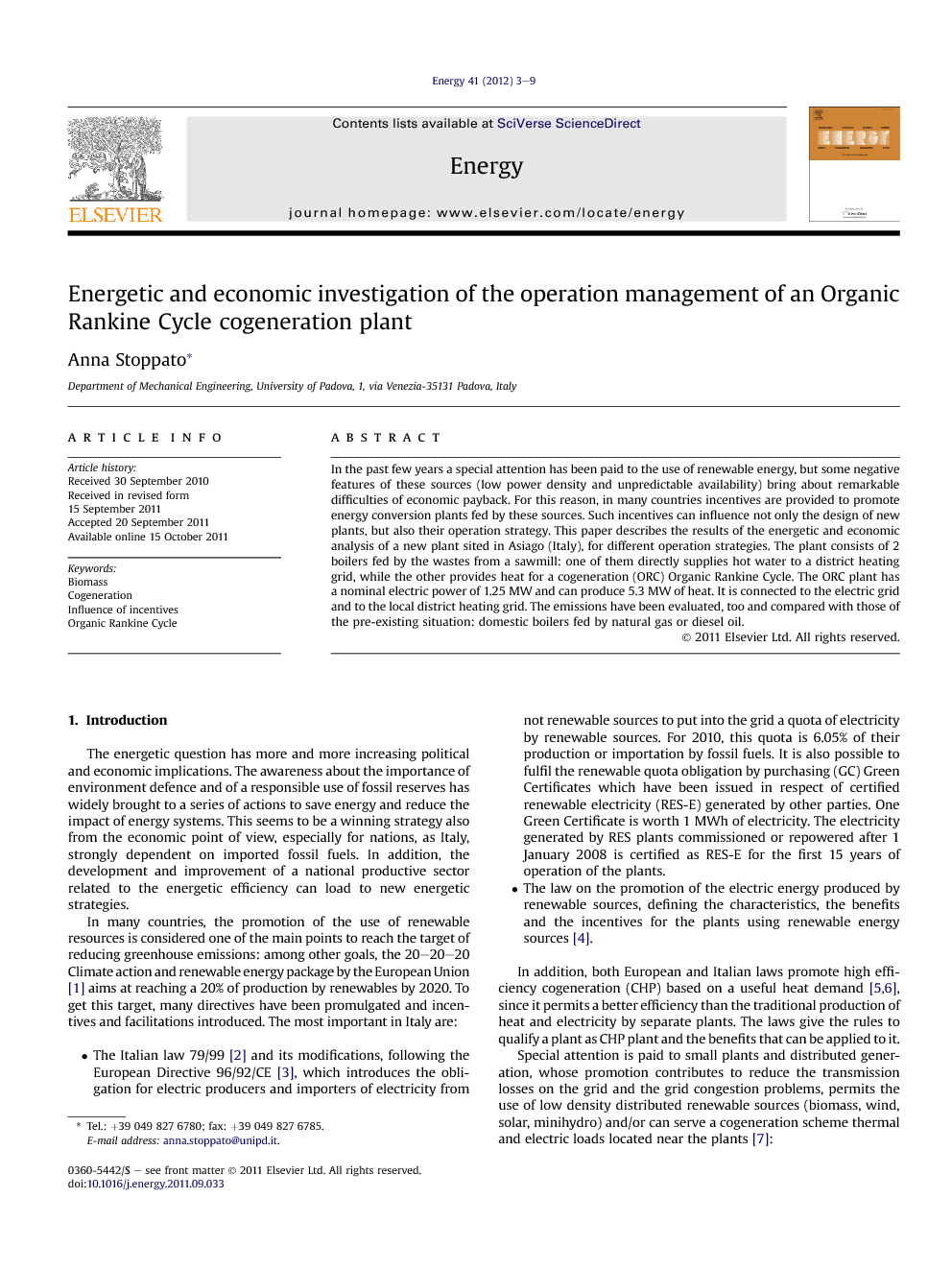 In the past few years a special attention has been paid to the use of renewable energy, but some negative features of these sources (low power density and unpredictable availability) bring about remarkable difficulties of economic payback. For this reason, in many countries incentives are provided to promote energy conversion plants fed by these sources. Such incentives can influence not only the design of new plants, but also their operation strategy. This paper describes the results of the energetic and economic analysis of a new plant sited in Asiago (Italy), for different operation strategies. The plant consists of 2 boilers fed by the wastes from a sawmill: one of them directly supplies hot water to a district heating grid, while the other provides heat for a cogeneration (ORC) Organic Rankine Cycle. The ORC plant has a nominal electric power of 1.25 MW and can produce 5.3 MW of heat. It is connected to the electric grid and to the local district heating grid. The emissions have been evaluated, too and compared with those of the pre-existing situation: domestic boilers fed by natural gas or diesel oil.

The energetic question has more and more increasing political and economic implications. The awareness about the importance of environment defence and of a responsible use of fossil reserves has widely brought to a series of actions to save energy and reduce the impact of energy systems. This seems to be a winning strategy also from the economic point of view, especially for nations, as Italy, strongly dependent on imported fossil fuels. In addition, the development and improvement of a national productive sector related to the energetic efficiency can load to new energetic strategies. In many countries, the promotion of the use of renewable resources is considered one of the main points to reach the target of reducing greenhouse emissions: among other goals, the 20–20–20 Climate action and renewable energy package by the European Union [1] aims at reaching a 20% of production by renewables by 2020. To get this target, many directives have been promulgated and incentives and facilitations introduced. The most important in Italy are: • The Italian law 79/99 [2] and its modifications, following the European Directive 96/92/CE [3], which introduces the obligation for electric producers and importers of electricity from not renewable sources to put into the grid a quota of electricity by renewable sources. For 2010, this quota is 6.05% of their production or importation by fossil fuels. It is also possible to fulfil the renewable quota obligation by purchasing (GC) Green Certificates which have been issued in respect of certified renewable electricity (RES-E) generated by other parties. One Green Certificate is worth 1 MWh of electricity. The electricity generated by RES plants commissioned or repowered after 1 January 2008 is certified as RES-E for the first 15 years of operation of the plants. • The law on the promotion of the electric energy produced by renewable sources, defining the characteristics, the benefits and the incentives for the plants using renewable energy sources [4]. In addition, both European and Italian laws promote high efficiency cogeneration (CHP) based on a useful heat demand [5] and [6], since it permits a better efficiency than the traditional production of heat and electricity by separate plants. The laws give the rules to qualify a plant as CHP plant and the benefits that can be applied to it. Special attention is paid to small plants and distributed generation, whose promotion contributes to reduce the transmission losses on the grid and the grid congestion problems, permits the use of low density distributed renewable sources (biomass, wind, solar, minihydro) and/or can serve a cogeneration scheme thermal and electric loads located near the plants [7]: • Simplified procedures for the connection to the grid are contemplated. • Small plants (P < 10MVA) can opt for indirect sale through the Italian Energetic Services Manager (Gestore Servizi Energetici, GSE), instead of the direct sale in the market profit. For plants having P > 1 MW the sellback prices are the market ones, while smaller plants have minimum granted prices for the first 2 million kWh. • Very small plants (P < 1 MW) fed by renewable sources can also choose the all-inclusive feed-in tariff, comprehensive of the Green Certificates, which gives granted sellback prices for the whole production. • Finally, the net metering service is granted for electricity generated by RES plants of up to 200 kW. These facilitations have promoted the growth in Italy of distributed (P < 10MVA) and small (P < 1 MW) generation. In 2008, 21.6TWh of electric energy (about 4.3% of the Italian production) were produced by distributed plants (1.9 TWh by small plants), with an increase of 1.3 TWh (+11.8%) with respect to 2007 and of 8.1 TWh (+60%) with respect to 2006. About 60% of this energy is produced by renewable sources, of which about 15% using biomass. For applications using biomass the employment of Organic Rankine Cycles (ORC) is a good solution [8], [9], [10], [11] and [12]. Among other technologies, they present high efficiency for low temperature applications, high availability and simple management. The combustion takes place in boilers of proven and simple operation, where diathermic oil is heated and so the operation problems related to the use of superheated steam are avoided. Then, this oil provides heat to the organic fluid, which evaporates and expands in a turbine. ORC plants seem to be particularly interesting for low temperature cogeneration applications. Since the end of 2009, an ORC plant has been working in Asiago, Italy, using the wastes of a sawmill. It produces electricity, sold to the grid, and heat for the local district heating grid. In this paper, different operation modes for this plant will be analyzed from both energetic and economic viewpoints. Special attention will be paid to the influence of the incentives on the results of the analysis. This aspect is particularly interesting for this plant whose size, 1255 kWel, gives the possibility to choose among different options of incentives. The paper will also present the analysis of the emissions of the plant, comparing them with the pre-existing conditions, when domestic boilers fed by natural gas or diesel oil were used.

The analysis of an ORC cogeneration plant fed by biomass has been performed. The analysis has shown that the present incentives lead to a not rational use of energy, since it is convenient to maximize electric production, with a total efficiency of about 15%, instead of cogenerating heat and electricity, with a total efficiency of about 80%. This is in agreement with the regulations, whose goal is only the production of electricity by renewable sources instead of fossil fuels. Nevertheless, it seems that a good policy should pay greater attention to the efficiency of the plant. At the same time, the optimization of the choice of electricity remuneration tariff shows that, at present market prices, the all-inclusive tariff is the most convenient. For this reason, if the availability of renewable sources were able to produce in a plant a power higher than 1 MW, up to about 2 MW, it would be convenient to produce a smaller amount of electricity in order to take advantage of the higher selling prices. In these conditions, plant managers would not be careful to maximize the efficiency of the energy conversion plant. This is in contrast with the spirit of the law.