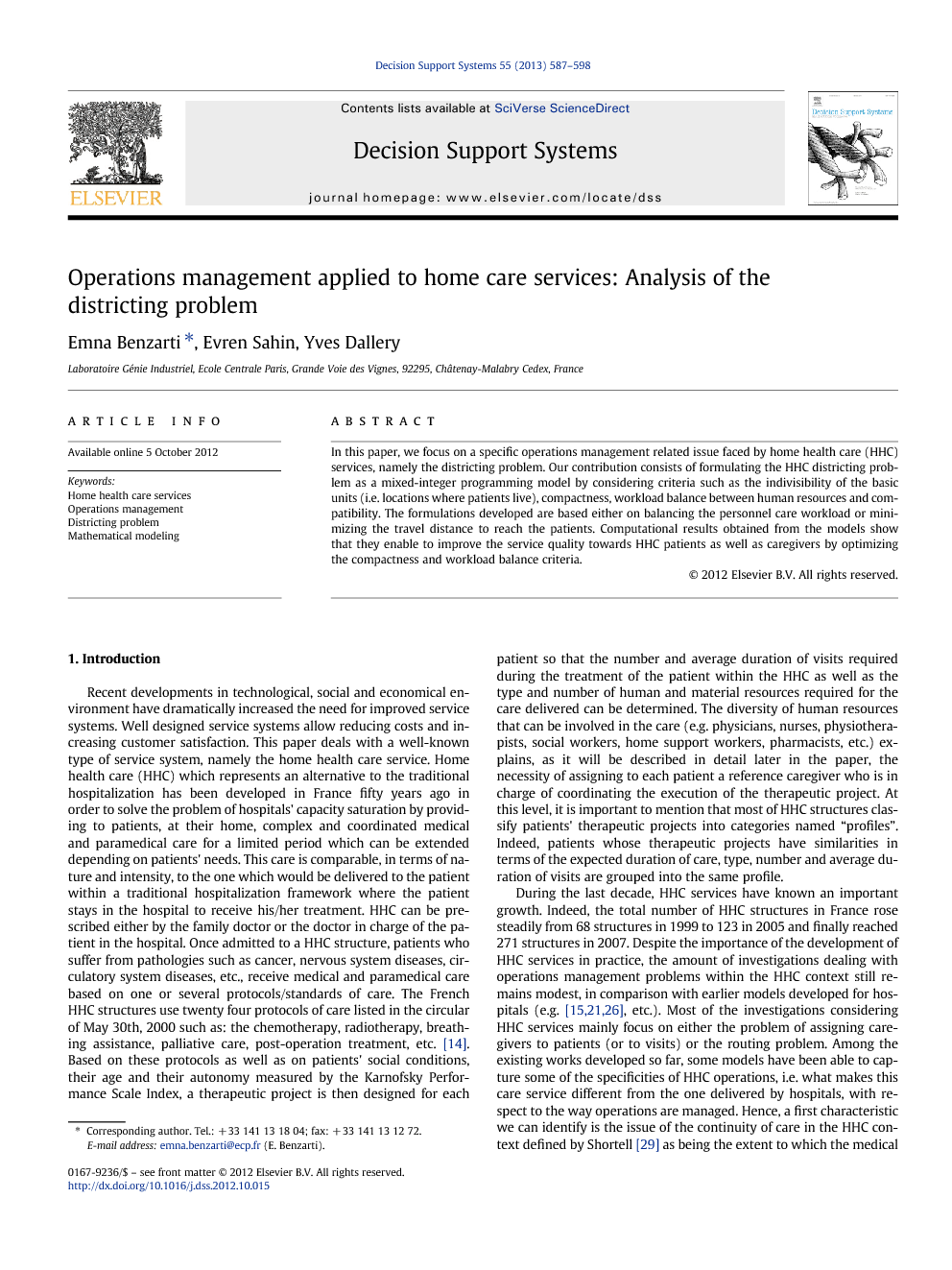 In this paper, we focus on a specific operations management related issue faced by home health care (HHC) services, namely the districting problem. Our contribution consists of formulating the HHC districting problem as a mixed-integer programming model by considering criteria such as the indivisibility of the basic units (i.e. locations where patients live), compactness, workload balance between human resources and compatibility. The formulations developed are based either on balancing the personnel care workload or minimizing the travel distance to reach the patients. Computational results obtained from the models show that they enable to improve the service quality towards HHC patients as well as caregivers by optimizing the compactness and workload balance criteria.

In this paper, we developed two models for the districting problem applied to HHC structures. We also presented a numerical analysis based on different instances generated randomly. This enabled us to evaluate the impact of the key parameters on the workload balance and compactness criteria. Indeed, their analysis indicates that for a given M, pmax and dmax (Model 1) or τ (Model 2), by increasing N, the feasibility percentage and the mean distance are weakened while the mean gap_max is improved. Similarly, for a given N, pmax and dmax (Model 1) or τ (Model 2), the feasibility percentage decreases and the mean gap_max or distance increases as long as pmax increases or the value of dmax (Model 1) or τ (Model 2) decreases. Furthermore, for a fixed value of N, the higher is the number of districts to design M, the higher is the mean gap_max and the less is the mean distance. Since this work was based on instances generated randomly, we consider, in our ongoing research, to apply the proposed models to a real case of a HHC structure. In this context, developing a heuristic approach for solving the real instances represents also an interesting research priority. Furthermore, we intend to consider several extensions of the models we propose. The first extension concerns the periodic revision of the districting problem on a rolling horizon so that new information on demand related to the number of patients who need the care, level of care required by each patient, changes in the number of caregivers, etc. can be integrated to the districting decision. This process of revision of the districting (i.e. the redistricting problem) can also respect additional constraints such as a maximum number of changes in basic unit–district assignments over a period of time in order to preserve the development of relationships between patients and caregivers, the organization of the work of caregivers with local community agencies, etc. A potential second extension would concern the possibility to optimize simultaneously the care workload and the travel distance criteria while forming the districts. This can be done by using a multi-criteria approach which consists on formulating the problem as a weighted sum of the maximum deviation of the district care workload from the average care workload and the maximum distance between two basic units that can be assigned to the same district. Such approaches have been applied for solving the districting problem in other realms such as the electrical power districting problem or the political districting. Overall, we must keep in mind that the objective of this work is not to develop a total automatic procedure but to propose a decision support system for the HHC managers who would modify solutions obtained by the mathematical models based on their experience. This interaction would probably conduct to more suitable solutions according to the criteria that are difficult to quantify. Furthermore, the HHC managers should verify the efficiency of adopting the districting approach for improving the human resources management in terms of its impact on increasing human resources motivation and work satisfaction.