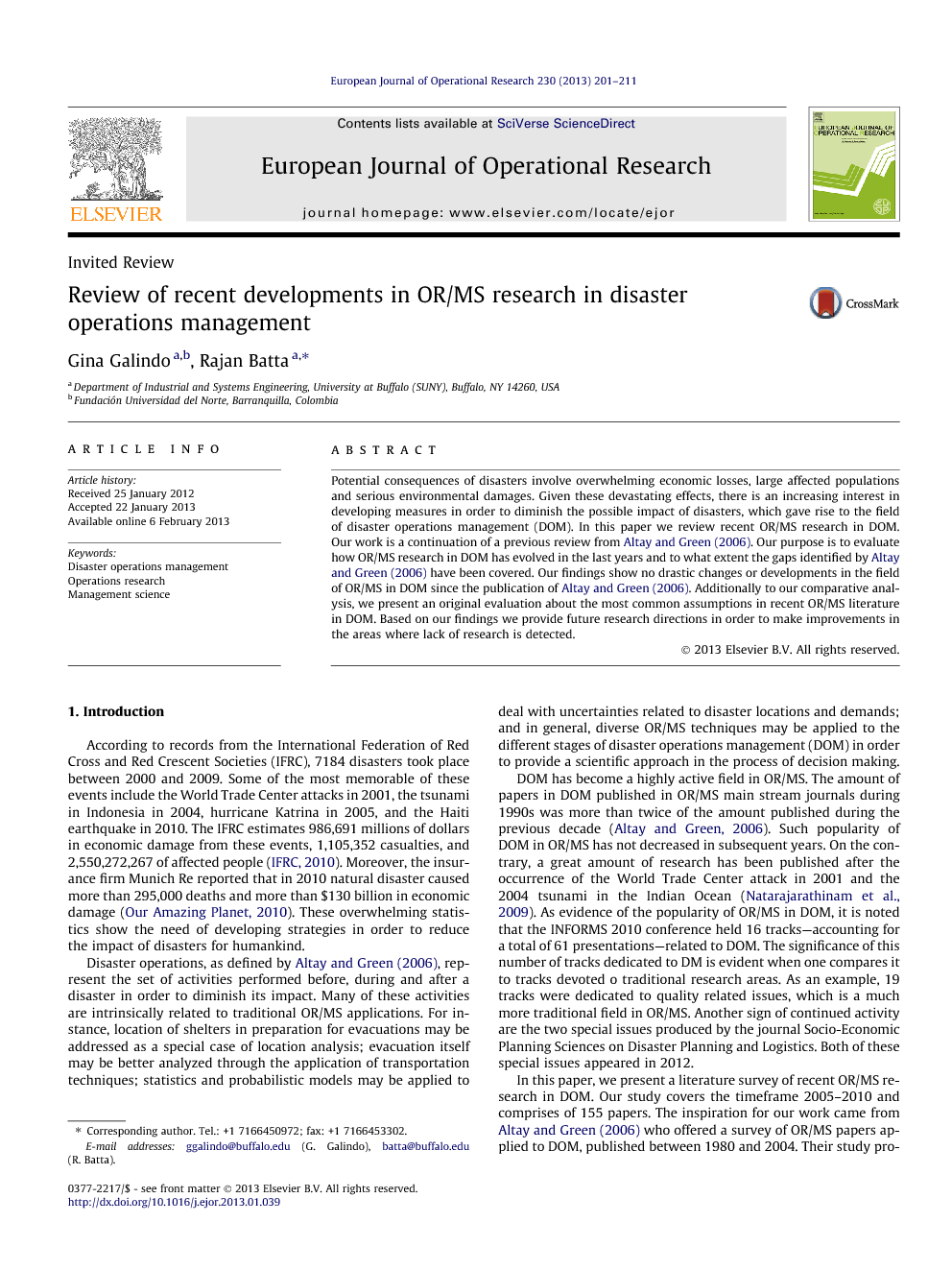 Potential consequences of disasters involve overwhelming economic losses, large affected populations and serious environmental damages. Given these devastating effects, there is an increasing interest in developing measures in order to diminish the possible impact of disasters, which gave rise to the field of disaster operations management (DOM). In this paper we review recent OR/MS research in DOM. Our work is a continuation of a previous review from Altay and Green (2006). Our purpose is to evaluate how OR/MS research in DOM has evolved in the last years and to what extent the gaps identified by Altay and Green (2006) have been covered. Our findings show no drastic changes or developments in the field of OR/MS in DOM since the publication of Altay and Green (2006). Additionally to our comparative analysis, we present an original evaluation about the most common assumptions in recent OR/MS literature in DOM. Based on our findings we provide future research directions in order to make improvements in the areas where lack of research is detected.

In this paper we have presented a review in recent OR/MS literature in DOM. Our work is a continuation of a previous review from Altay and Green (2006). We present a classification scheme based on the one used by Altay and Green (2006). Our findings were compared to those reported by Altay and Green (2006) in order to analyze how the field has evolved since their review was published. We found that most trends have remained, e.g., lack of research for recovery activities; but others have experienced shifts, e.g., proportion of ME articles in OR/MS research in DOM. Our review concludes that there has not been drastic changes or developments in the field of OR/MS in DOM since the publication of Altay and Green (2006). Our findings also show that most of the gaps observed by Altay and Green (2006) still remain. This suggests that there is not a clear initiative in OR/MS research to explicitly fill such gaps. We have provided a set of future research directions based on the gaps that still persist since Altay and Green (2006) and the new gaps identified in our survey. We believe it would be professionally beneficial for the OR/MS community to focus on filling these gaps. This will provide a solid basis for OR/MS research in DOM, and more importantly, allow the field of OR/MS to make effective contributions in actual disaster relief efforts. Suggested future research directions include: (i) improvement of the coordination among DOM actors; (ii) introduction of new technologies through more application studies; (iii) study of DOM problems as a whole by exploring well-studied as well as understudied areas that can benefit from OR/MS, using formal statistical analysis to establish realistic assumptions in DOM models that reflect the stochastic nature of DOM; (iv) in-depth exploration of methodologies such as Soft OR and interdisciplinary techniques that are suitable to DOM; and (v) measurement of the effectiveness of adopted strategies through the use of performance indicators. We believe that our results give an accurate perspective of recent OR/MS literature in DOM. Despite this assertion, our list of references cannot be considered an exhaustive bibliography of the field. It is our sincere hope that our findings and recommendations will contribute to the improvement of DOM operations and will inspire other researchers to develop work in order to fill the gaps identified.