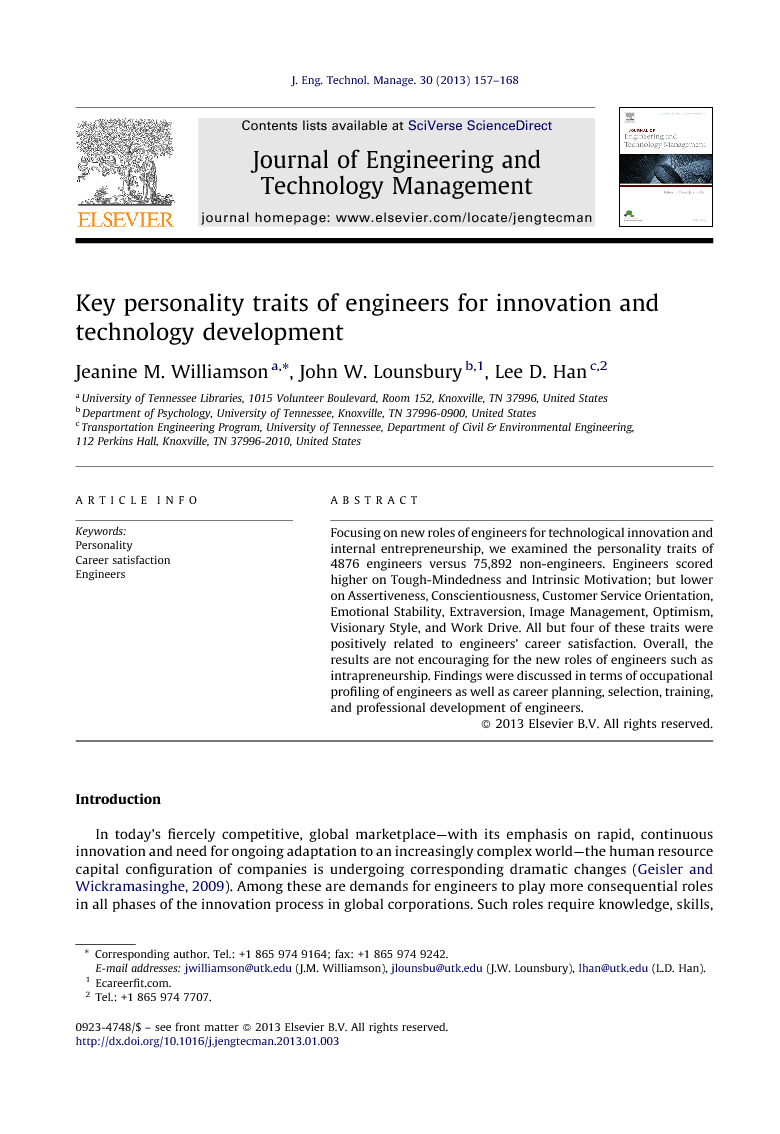 Focusing on new roles of engineers for technological innovation and internal entrepreneurship, we examined the personality traits of 4876 engineers versus 75,892 non-engineers. Engineers scored higher on Tough-Mindedness and Intrinsic Motivation; but lower on Assertiveness, Conscientiousness, Customer Service Orientation, Emotional Stability, Extraversion, Image Management, Optimism, Visionary Style, and Work Drive. All but four of these traits were positively related to engineers’ career satisfaction. Overall, the results are not encouraging for the new roles of engineers such as intrapreneurship. Findings were discussed in terms of occupational profiling of engineers as well as career planning, selection, training, and professional development of engineers.

We found that engineers differed on all buttwo of 13 personality traits when compared with nonengineers. In addition, all butthree ofthe personality traits under study were correlated signiﬁcantly and positively withcareer satisfaction. The correlational results generally aligned quite well withand are readilyinterpretablebyHolland’s (1996)vocationalﬁttheory.Comparisonsofmeantrait scoresof engineers withnon-engineerswere less consistent withHolland’sﬁtmodel and withmosttraditional engineering job descriptions. In particular, we were surprised by the lower Conscientiousness scores of engineers and by its lack of correlation with engineers’ career satisfaction,though such scores also could reﬂect higher levels of creativity and ﬂexibility—which are advantageous for intrapreneurship and innovation (Lounsbury and Gibson, 2012). Future research is needed to resolve whether such a result reﬂects a move toward greater emphasis on creativity and non-routine problem-solving in engineering work rather than orderly, exacting, conscientious work on standard problems, or if it reﬂects a lower caliber talent pool of qualiﬁed candidates for engineering positions. In any case, the present ﬁndings underscore the challenges of ﬁnding engineers with personality traits ﬁtting for the new roles associated with intrapreneurship and technical innovation. Successfully meeting these challenges may help allay—though by no means resolve—concerns for national competitiveness and prosperity. To do so will require the combined efforts ofthe public and private sectors to enhance the attributes of engineers for innovation and new technology development. From the present ﬁndings, we can present two different proﬁles of the key personality traits of engineers, one deriving from the mean differences between engineers and non-engineers;the other, from correlations with career satisfaction. Based on our interpretations of the meaning of each trait and compared to other occupations, engineers are more:introverted, intrinsically motivated, ﬂexible and creative, and tough-minded/analytical. They are also less: assertive, emotionally resilient, optimistic, customer-oriented, concerned with Image Management, hard-working, and visionary in their thinking style. In addition, engineers who are more satisﬁed with their careers are more: assertive, customer-oriented, emotionally stable and resilient, extraverted, open to new experience, optimistic,tough-minded/analytical,teamwork-oriented, hard-working; and they are less concerned with Image Management. These proﬁles depict a more complex, nuanced, and empirically grounded setofpersonalityattributesof engineers thancanbe foundinmostjobdescriptions andinthe current primary national database on occupational information—O*NET. In summary, the current results carry manifold implications for engineering management, engineering job taxonomies, andnational policy,inadditionto future researchinthis area.Hopefully, the present ﬁndings can be utilized to improve human resources management when recruiting, selecting,placing,training,mentoring, anddevelopingengineers forpresent-dayjobs aswell as future jobs occasioned by the ever increasing need for innovation and new product development.