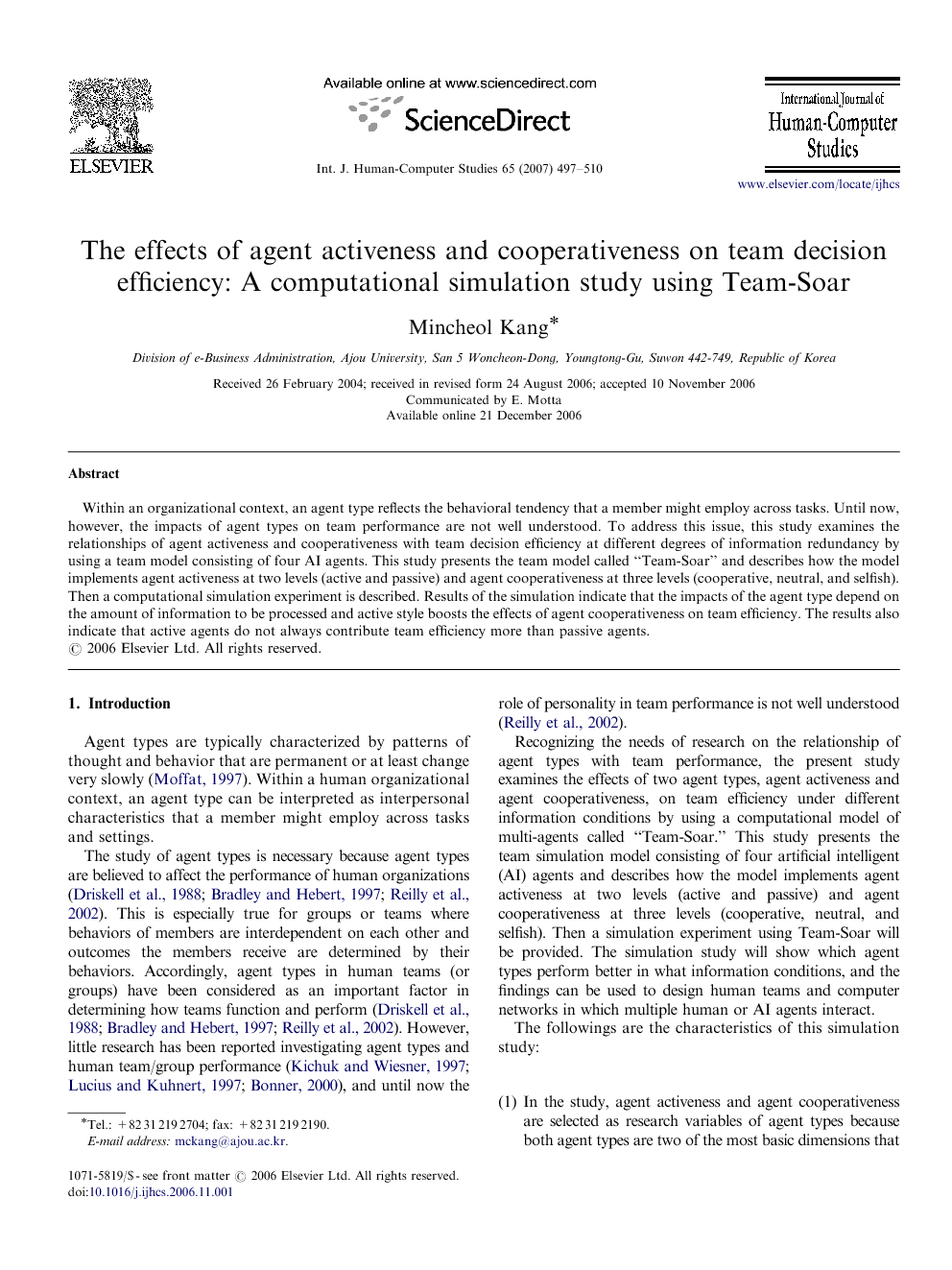 Within an organizational context, an agent type reflects the behavioral tendency that a member might employ across tasks. Until now, however, the impacts of agent types on team performance are not well understood. To address this issue, this study examines the relationships of agent activeness and cooperativeness with team decision efficiency at different degrees of information redundancy by using a team model consisting of four AI agents. This study presents the team model called “Team-Soar” and describes how the model implements agent activeness at two levels (active and passive) and agent cooperativeness at three levels (cooperative, neutral, and selfish). Then a computational simulation experiment is described. Results of the simulation indicate that the impacts of the agent type depend on the amount of information to be processed and active style boosts the effects of agent cooperativeness on team efficiency. The results also indicate that active agents do not always contribute team efficiency more than passive agents

Agent types are typically characterized by patterns of thought and behavior that are permanent or at least change very slowly (Moffat, 1997). Within a human organizational context, an agent type can be interpreted as interpersonal characteristics that a member might employ across tasks and settings. The study of agent types is necessary because agent types are believed to affect the performance of human organizations (Driskell et al., 1988; Bradley and Hebert, 1997; Reilly et al., 2002). This is especially true for groups or teams where behaviors of members are interdependent on each other and outcomes the members receive are determined by their behaviors. Accordingly, agent types in human teams (or groups) have been considered as an important factor in determining how teams function and perform (Driskell et al., 1988; Bradley and Hebert, 1997; Reilly et al., 2002). However, little research has been reported investigating agent types and human team/group performance (Kichuk and Wiesner, 1997; Lucius and Kuhnert, 1997; Bonner, 2000), and until now the role of personality in team performance is not well understood (Reilly et al., 2002). Recognizing the needs of research on the relationship of agent types with team performance, the present study examines the effects of two agent types, agent activeness and agent cooperativeness, on team efficiency under different information conditions by using a computational model of multi-agents called “Team-Soar.” This study presents the team simulation model consisting of four artificial intelligent (AI) agents and describes how the model implements agent activeness at two levels (active and passive) and agent cooperativeness at three levels (cooperative, neutral, and selfish). Then a simulation experiment using Team-Soar will be provided. The simulation study will show which agent types perform better in what information conditions, and the findings can be used to design human teams and computer networks in which multiple human or AI agents interact. The followings are the characteristics of this simulation study: (1) In the study, agent activeness and agent cooperativeness are selected as research variables of agent types because both agent types are two of the most basic dimensions that describe human's interaction behavior; hence they are believed to affect team performance significantly. The study especially concerns the mixture of the agent types and how the two types interactively affect team efficiency. (2) The study also tries to explore the relationship of agent types with information. The study models the agent types in terms of the attitudes of AI agents when they exchange information to fulfill their assignments. Unlike past studies that have focused on how agent types affect information processing behavior, this study examines how information redundancy controls the impact of agent types on team efficiency. (3) Often agent types are uncontrollable or hard to control for experimentation. One way of overcoming the problems is to use computational models. Due to the advantage of control, computational models have been widely used for studying social natures of humans. The study uses a theory-based computational model (i.e. Soar) to represent the social attitudes of agent activeness and agent cooperativeness. In particular, the multi-agents Soar technique (Laird et al., 1993) is used to build the Team-Soar model because the modeling subject, which is a hierarchical decision making team with distributed expertise, is comprised of multiple intelligent human agents. Before going to further, there is one thing to mention. Note that, in this paper, the terms “team(s)” and “organization(s)” are used with discretion. Orasanu and Salas (1993) define groups as just collections of people. That is, groups are small organizations of people. Teams are a special class of groups that consists of two or more people who share a common goal (O’Neil et al., 1992; Orasanu and Salas, 1993; Hollenbeck et al., 1995). In particular, a team is a small organization, where communication is a beneficial component of a task (Carley et al., 1993). Therefore, a team has special characteristics as a special group as well as general characteristics as a small organization. In this paper, the term “organization(s)” is used when it is relevant to small organizations in general, whereas the term “team(s)” is used when it is appropriate to the special class of groups specifically. The later parts of this paper are organized as follows: The next section reviews theoretical background of the study. The third section describes Team-Soar that models a naval command and control team and how the model implements agent activeness and cooperativeness specifically. The fourth section introduces a simulation experiment using Team-Soar and discusses the results. The last section presents the conclusion.

So far in this paper, we have examined the effects of agent activeness and agent cooperativeness on team efficiency under different information redundancy by performing a simulation experiment with a multi-agents system, Team-Soar. Results of the study provide the valuable insights into the impact of the two agent types on team performance. First of all, the results support the arguments that agent activeness and agent cooperativeness are important decision factors of team decision efficiency. The results confirm existing research results, which indicate that agent styles affect efficiency of response (Kets de Vries and Miller, 1986; LaPorte and Consolini, 1991). Compared to the generalized findings in the existing research, however, the results from Team-Soar simulation provide more specific relationships among the research variables: According to the results, active agent style boosts the effects of agent cooperativeness on team decision efficiency. The results also indicate that the impacts of agent types (i.e., magnitude and direction of the impacts) on team efficiency depend on the amount of information to be processed by the team. Some of the simulation results do not meet our general expectation and, therefore they provide an opportunity for researchers to understand the roles of the agent types more deeply. For example, owing to the extra cost involved, active member agents do not always contribute team efficiency more than passive member agents. This result demonstrates the very problem of the proactive way of information exchange conceived by Yen et al. (2001). In fact, literature in psychology indicates that there are negative relationships between extraversion and performance for certain tasks (Barry and Stewart, 1997). The present study has some limitations. Since the relationship between personality and performance appears to be dependent on the type of task and human team (Bowers et al., 2000; Reilly et al., 2002) the results may be only applicable to the particular type of team that Team-Soar models after. For example, Team-Soar models a hierarchical team with distributed expertise in which team members pursuit their individual goals while sharing a team goal. Hence, it is necessary to be aware of the team structure (i.e., one-level hierarchical team with distributed expertise) when interpreting or applying the results of the Team-Soar simulation. That is, the results may not be applicable for the teams with no hierarchy or teams consisting of members that have equal/similar expertise. Moreover, the findings from this study need to be tested as research hypotheses in different settings (including experiments with human teams) to generalize them. The homogeneity of agent type composition is also a limitation. In this study, all member agents of an artificial team have the same levels of agent activeness and agent cooperativeness. Therefore, results of this study cannot address the impacts of heterogeneity of agent type composition on team performance. Literature in group dynamics suggests that team composition of agent types does appear to be an important explanatory variable for differences in human team performance (Bradley and Hebert, 1997). Further research that examines the efficiency of homogeneous and heterogeneous teams with respect to agent activeness and agent cooperativeness is necessary to find out whether the simulation study confirms the previous findings. The present study cannot cover all factors in the five-factor model, which has received considerable research attention as a useful representation of personality traits (Barrick and Mount, 1991; Neuman et al., 1999). Although realizing the importance of the five-factor model, the present study has to deal with only two factors out of five in the model due to the lack of knowledge to model some factors into computers and due to the insignificant roles of the omitted factors within the current problem setting comparing to the efforts to represent them. For example, one factor of the model, emotional stability, which has “calm,” “poised,” “secure,” etc., as indicators cannot be represented owing to that the literature does not have sufficient knowledge to represent emotional things into computational models. For another example, openness to experience, which has “imaginative,” “sensitive,” etc., as indicators is not considered here because the factor seems not to play significant role in the simplified problem domain where member agents make judgments/decisions based only on a given set of information. Despite the limitations, the simulation study demonstrates how the use of computational models with multi-agents techniques is beneficial for the research of agent's social characteristics, which is the area that often prevents researchers from using human subjects directly. Recall that humans are complex being, therefore researchers have difficulties in measuring and controlling social characteristics of humans like agent types for experimental settings. The simulation study is an instance of incorporating simulation for theory development (Prietula et al., 1998). The findings of this study are applicable regardless of the domains, such as defense, crisis management, etc., as long as the conditions described in the limitations of this study are met. Both human resource management managers and AI agent designers can get the benefits from the findings of this study. The findings can be used to design right combination of human team members with respect to agent types and used to design networks in which multiple electronic agents interact with each other. Particularly, the findings can enhance web services as the use of software agents and cooperation among them become increased on the Internet. The future research with the use of Team-Soar will mainly focus on overcoming the limitations of the present study. First, the future research will examine the impact of agent types other than agent activeness and cooperativeness on team performance. Second, the future research will try to generalize the findings of the present study. Third, the future research will examine the impacts of heterogeneity of agent type composition on team performance.