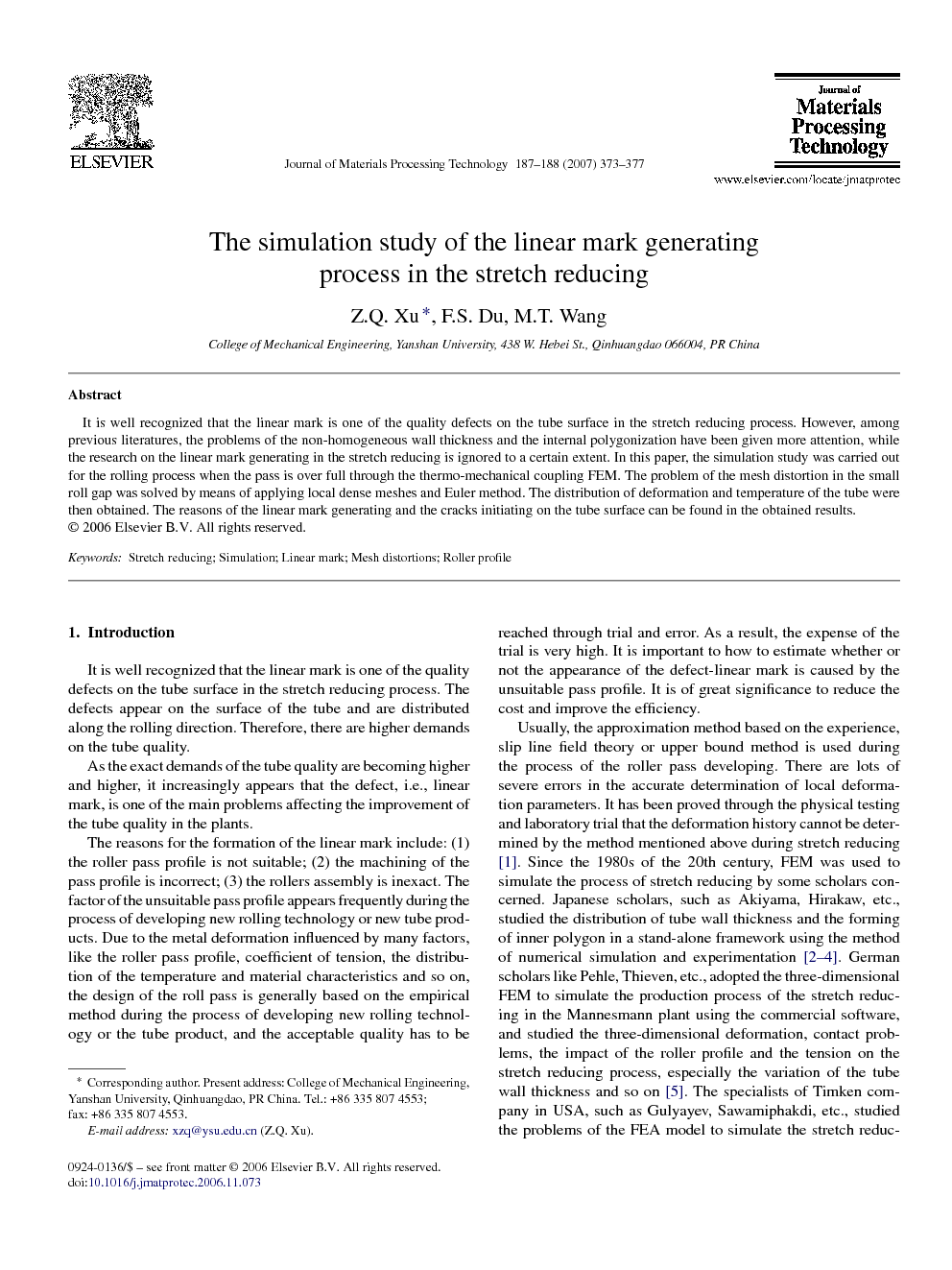 It is well recognized that the linear mark is one of the quality defects on the tube surface in the stretch reducing process. However, among previous literatures, the problems of the non-homogeneous wall thickness and the internal polygonization have been given more attention, while the research on the linear mark generating in the stretch reducing is ignored to a certain extent. In this paper, the simulation study was carried out for the rolling process when the pass is over full through the thermo-mechanical coupling FEM. The problem of the mesh distortion in the small roll gap was solved by means of applying local dense meshes and Euler method. The distribution of deformation and temperature of the tube were then obtained. The reasons of the linear mark generating and the cracks initiating on the tube surface can be found in the obtained results.

It is well recognized that the linear mark is one of the quality defects on the tube surface in the stretch reducing process. The defects appear on the surface of the tube and are distributed along the rolling direction. Therefore, there are higher demands on the tube quality. As the exact demands of the tube quality are becoming higher and higher, it increasingly appears that the defect, i.e., linear mark, is one of the main problems affecting the improvement of the tube quality in the plants. The reasons for the formation of the linear mark include: (1) the roller pass profile is not suitable; (2) the machining of the pass profile is incorrect; (3) the rollers assembly is inexact. The factor of the unsuitable pass profile appears frequently during the process of developing new rolling technology or new tube products. Due to the metal deformation influenced by many factors, like the roller pass profile, coefficient of tension, the distribution of the temperature and material characteristics and so on, the design of the roll pass is generally based on the empirical method during the process of developing new rolling technology or the tube product, and the acceptable quality has to be reached through trial and error. As a result, the expense of the trial is very high. It is important to how to estimate whether or not the appearance of the defect-linear mark is caused by the unsuitable pass profile. It is of great significance to reduce the cost and improve the efficiency. Usually, the approximation method based on the experience, slip line field theory or upper bound method is used during the process of the roller pass developing. There are lots of severe errors in the accurate determination of local deformation parameters. It has been proved through the physical testing and laboratory trial that the deformation history cannot be determined by the method mentioned above during stretch reducing [1]. Since the 1980s of the 20th century, FEM was used to simulate the process of stretch reducing by some scholars concerned. Japanese scholars, such as Akiyama, Hirakaw, etc., studied the distribution of tube wall thickness and the forming of inner polygon in a stand-alone framework using the method of numerical simulation and experimentation [2], [3] and [4]. German scholars like Pehle, Thieven, etc., adopted the three-dimensional FEM to simulate the production process of the stretch reducing in the Mannesmann plant using the commercial software, and studied the three-dimensional deformation, contact problems, the impact of the roller profile and the tension on the stretch reducing process, especially the variation of the tube wall thickness and so on [5]. The specialists of Timken company in USA, such as Gulyayev, Sawamiphakdi, etc., studied the problems of the FEA model to simulate the stretch reducing process, the contact problems, the variation of the tube wall thickness and so on [6] and [7]. Chinese experts, Du Fengshan, etc., simulated the production process of the stretch reducing of the Baosteel company using self-programming three-dimensional elastic-plasticity FEM software. And the simulation results are identical with the measured value of the Baosteel [8], [9], [10], [11] and [12]. The studies mentioned above mainly aim at the problems of the variation of the tube wall thickness and the forming of inner polygon. However, the research on simulating the linear mark generating in the stretch reducing is limited. This paper focuses on the mechanism of the linear mark formation using the FEM under the presupposition of the correct pass profile machining and the exact rollers assembly.