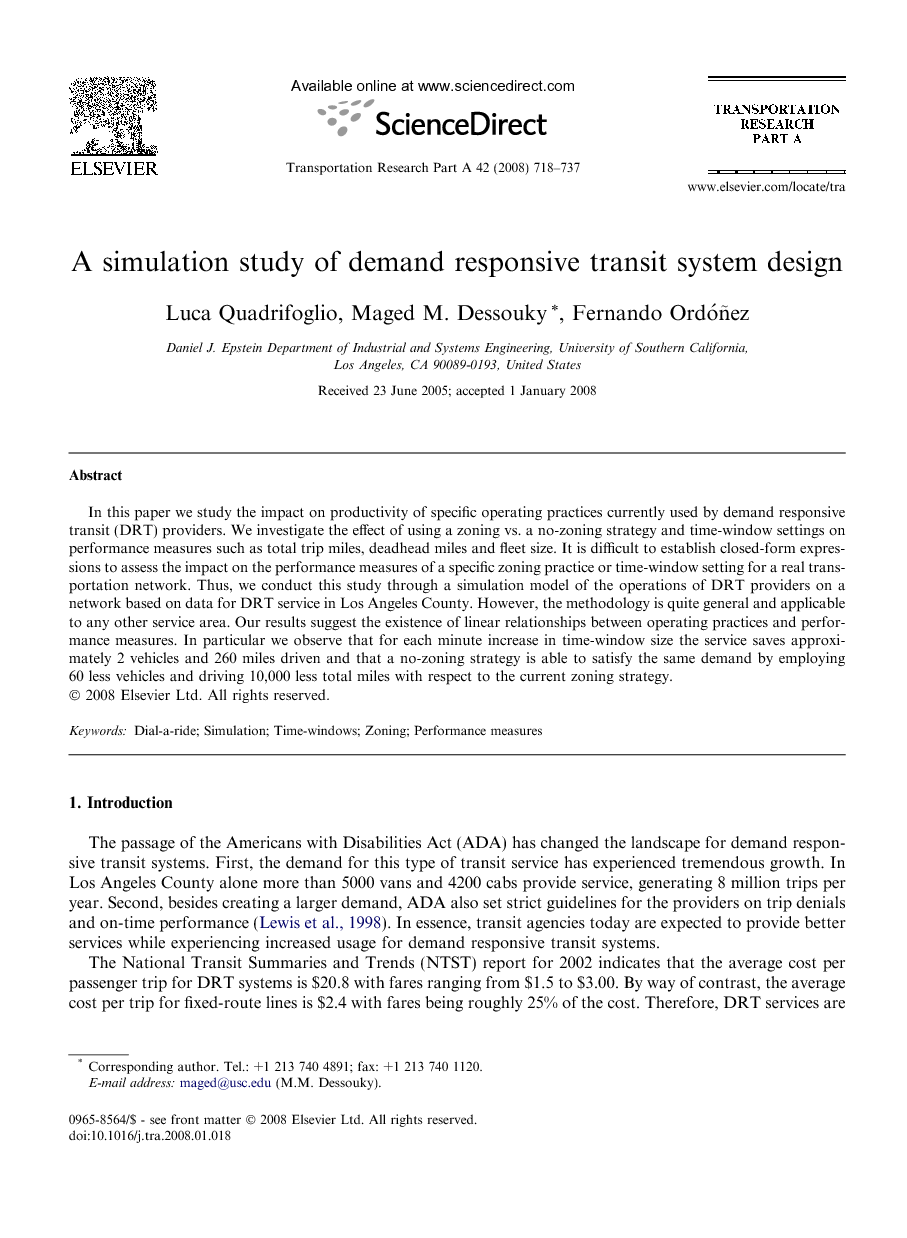 In this paper we study the impact on productivity of specific operating practices currently used by demand responsive transit (DRT) providers. We investigate the effect of using a zoning vs. a no-zoning strategy and time-window settings on performance measures such as total trip miles, deadhead miles and fleet size. It is difficult to establish closed-form expressions to assess the impact on the performance measures of a specific zoning practice or time-window setting for a real transportation network. Thus, we conduct this study through a simulation model of the operations of DRT providers on a network based on data for DRT service in Los Angeles County. However, the methodology is quite general and applicable to any other service area. Our results suggest the existence of linear relationships between operating practices and performance measures. In particular we observe that for each minute increase in time-window size the service saves approximately 2 vehicles and 260 miles driven and that a no-zoning strategy is able to satisfy the same demand by employing 60 less vehicles and driving 10,000 less total miles with respect to the current zoning strategy.

In this paper we quantified how much productivity and cost of Demand Responsive Transit (DRT) services are affected by two managerial practices: the time-window size setting and a centralized vs. decentralized strategy. Access Services Inc. (ASI), which is the designated consolidated transportation service agency to coordinate paratransit service within the Los Angeles County, provided us with demand data to generate statistical distributions used for a simulation model for our analyses. Although the results pertain to the network considered, the simulation methodology described here is quite general and easily applicable to any other large service area. The results of this study provide general insights on the dependency between performance measures and operating practices for large DRT services. We identified quasi-linear relationships between the performance measures and the independent variable, either the time-window size or the zoning policy. For the time-window size effect, we built linear regression models and observed that for each minute increased in the time-window size the service saves approximately 2 vehicles and 260 miles driven, while satisfying the same demand. Increasing the time-window size would also lower the customer satisfaction, thus managers have to carefully balance these two effects while setting the size. About the zoning policy, we observed that a centralized strategy is able to satisfy the same demand by employing 60 less vehicles and driving 10,000 less total miles with respect to a decentralized strategy. Most of the improvement is due to the drastic reduction of deadhead miles driven in the no-zoning (centralized) case. This increased efficiency has to be carefully balanced with the added complexity arising while managing centralized systems. Future research would include using approximations in order to build analytical models to quantify the zoning and the time-window size effects and compare their findings with the ones from this simulation analysis.