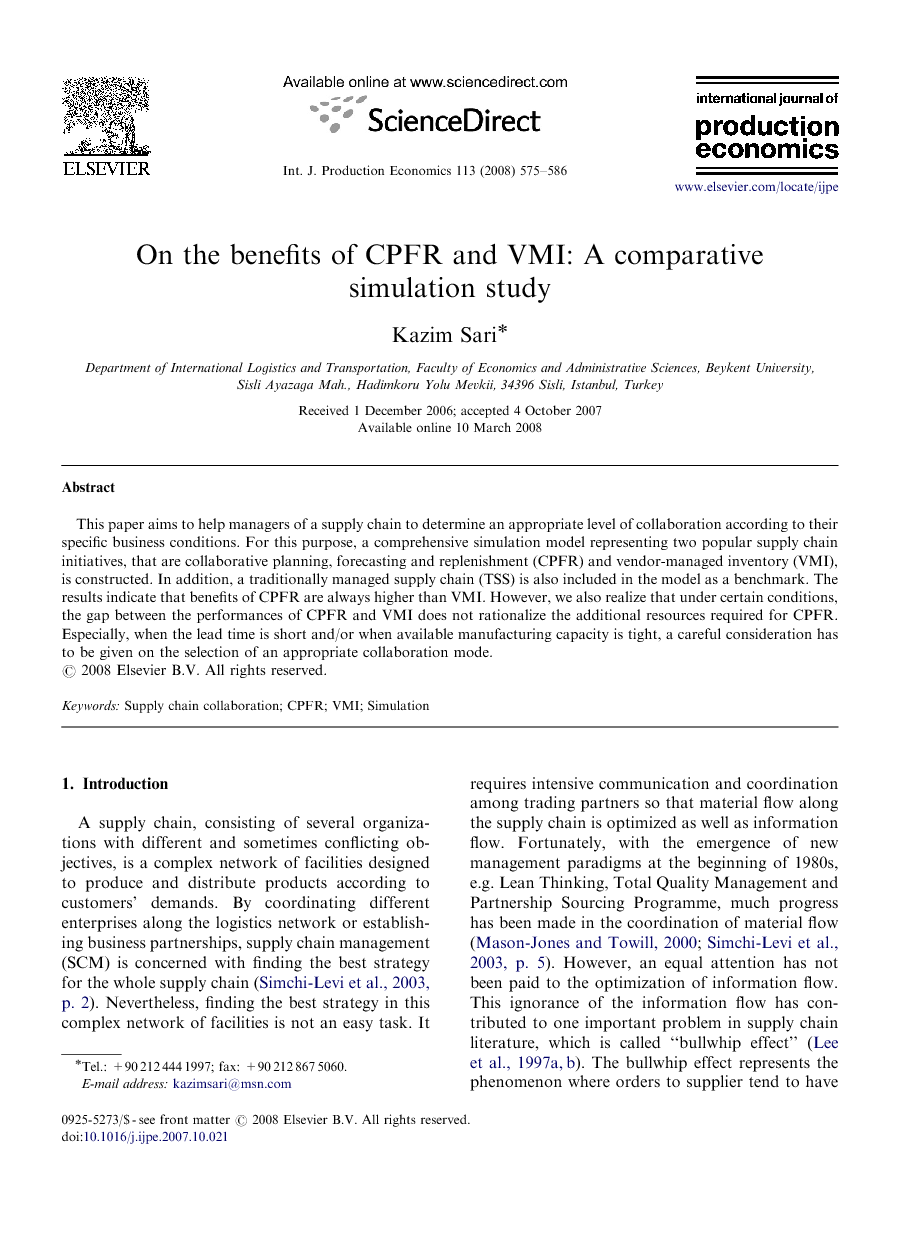 This paper aims to help managers of a supply chain to determine an appropriate level of collaboration according to their specific business conditions. For this purpose, a comprehensive simulation model representing two popular supply chain initiatives, that are collaborative planning, forecasting and replenishment (CPFR) and vendor-managed inventory (VMI), is constructed. In addition, a traditionally managed supply chain (TSS) is also included in the model as a benchmark. The results indicate that benefits of CPFR are always higher than VMI. However, we also realize that under certain conditions, the gap between the performances of CPFR and VMI does not rationalize the additional resources required for CPFR. Especially, when the lead time is short and/or when available manufacturing capacity is tight, a careful consideration has to be given on the selection of an appropriate collaboration mode.

This paper comparatively investigates the performance increase obtained from VMI and CPFR in a four-stage supply chain under both stationary and non-stationary customer demands viva a comprehensive simulation study. Through comprehensive simulation experiments and subsequent statistical analysis of the simulation outputs, we make the following three important observations. First, we observe that the benefits gained from CPFR are always higher than that of VMI under all conditions considered in this study. That is, compared with VMI, CPFR produces lower total supply chain cost as well as higher customer service levels. Therefore, from this study, we may sure and clear about the fact that the managers of a supply chain enterprise better off investing in CPFR. Second, through simulation output analysis, we observe that the performance increase gained from CPFR and VMI significantly depends on three factors. These are capacity tightness of the plant, replenishment lead times and uncertainty in market demand. As these factors get different levels, the benefits obtained from both initiatives also change substantially. Moreover, the gap between the performance improvements produced by CPFR and VMI also changes significantly. For example, we observe that when the lead times are short and/or where available manufacturing capacity is tight, the benefits of switching from VMI to CPFR are at its lowest value. That is, contribution of switching to CPFR is almost ignorable when we consider the additional resources required for CPFR adaptation. The managerial implication of this finding is great because nowadays, adaptation of every business practice, which is in fashion, is popular without analyzing the suitability of it for specific business conditions. Therefore, this research indicates that it is of highly importance to make careful benefit/cost analysis to invest in CPFR under the conditions where lead time is short and/or where available manufacturing capacity is very tight. Finally, we recognize that there are substantial decreases in the performance of VMI as the uncertainty in customer demand increases. On the other hand, we also recognize that there is only a slight decrease in the performance of CPFR under higher variable customer demands. Thus, indicating that highly variable customer demand results in widening the gap between the performances of CPFR and VMI. This is because of the fact that supply chain members may better manage the uncertainties through joint forecasting and inventory planning under CPFR. Therefore, one other managerial implication that can be drawn from this finding is that the practitioners have to invest in CPFR as soon as possible in the industries in which demand uncertainty is highly variable. The computer industry, for instance, with its very short product life cycle and highly variable customer demand, is a good example to industries where the adaptation of CPFR is an urgent need. Although this study provides important insights into CPFR and its relationship with VMI, we have to state that there are some limitations of this study. First, we consider a serial supply chain structure with one member at each echelon. This supply chain structure is only a simplified case and in future research studies, modeling more realistic supply chain structures may better explain and extend the results obtained from this research. Second, we assume that the members in the supply chain apply order-up to policies to make their production/inventory decisions; however, there are other types of inventory/production policies that can be included in the model. Third, the cost structure used in the simulation model only represents one special case.