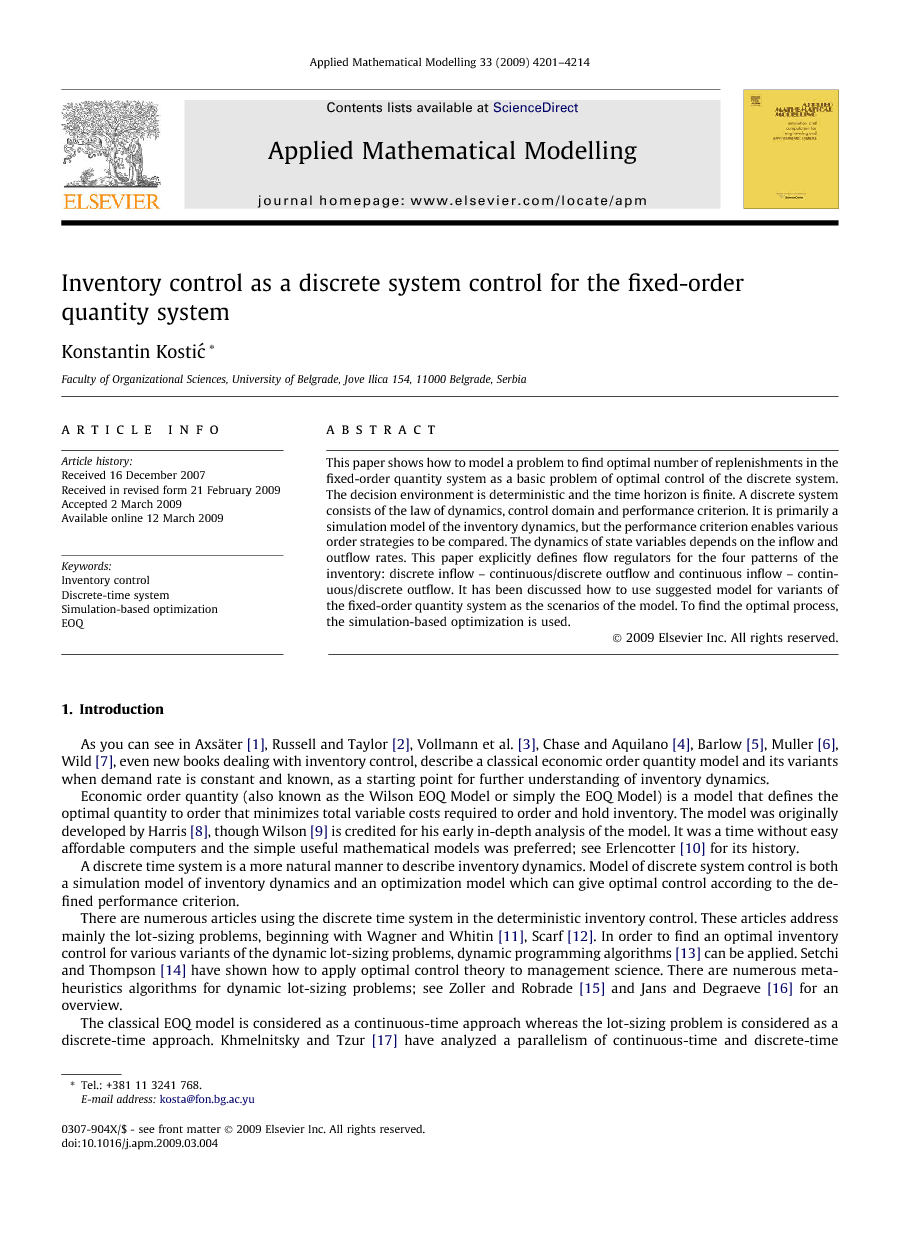 This paper shows how to model a problem to find optimal number of replenishments in the fixed-order quantity system as a basic problem of optimal control of the discrete system. The decision environment is deterministic and the time horizon is finite. A discrete system consists of the law of dynamics, control domain and performance criterion. It is primarily a simulation model of the inventory dynamics, but the performance criterion enables various order strategies to be compared. The dynamics of state variables depends on the inflow and outflow rates. This paper explicitly defines flow regulators for the four patterns of the inventory: discrete inflow – continuous/discrete outflow and continuous inflow – continuous/discrete outflow. It has been discussed how to use suggested model for variants of the fixed-order quantity system as the scenarios of the model. To find the optimal process, the simulation-based optimization is used.

As you can see in Axsäter [1], Russell and Taylor [2], Vollmann et al. [3], Chase and Aquilano [4], Barlow [5], Muller [6], Wild [7], even new books dealing with inventory control, describe a classical economic order quantity model and its variants when demand rate is constant and known, as a starting point for further understanding of inventory dynamics. Economic order quantity (also known as the Wilson EOQ Model or simply the EOQ Model) is a model that defines the optimal quantity to order that minimizes total variable costs required to order and hold inventory. The model was originally developed by Harris [8], though Wilson [9] is credited for his early in-depth analysis of the model. It was a time without easy affordable computers and the simple useful mathematical models was preferred; see Erlencotter [10] for its history. A discrete time system is a more natural manner to describe inventory dynamics. Model of discrete system control is both a simulation model of inventory dynamics and an optimization model which can give optimal control according to the defined performance criterion. There are numerous articles using the discrete time system in the deterministic inventory control. These articles address mainly the lot-sizing problems, beginning with Wagner and Whitin [11], Scarf [12]. In order to find an optimal inventory control for various variants of the dynamic lot-sizing problems, dynamic programming algorithms [13] can be applied. Setchi and Thompson [14] have shown how to apply optimal control theory to management science. There are numerous meta-heuristics algorithms for dynamic lot-sizing problems; see Zoller and Robrade [15] and Jans and Degraeve [16] for an overview. The classical EOQ model is considered as a continuous-time approach whereas the lot-sizing problem is considered as a discrete-time approach. Khmelnitsky and Tzur [17] have analyzed a parallelism of continuous-time and discrete-time production planning problems. They considered the lot-sizing problem “as the discrete counterpart of the EOQ, since it is merely a special case of the dynamic demand case”. The classical EOQ model tackles explicitly the fixed-order quantity system. Lot-sizing models address mainly the periodic review systems. EOQ model anticipates the saw-tooth pattern as the inventory dynamics. Articles, using dynamic programming approach [13], model the dynamics of the stock Xt by using an inflow variable ut as unknown, and outflow variable wt as deterministic or stochastic one (Xt+1 = Xt + ut − wt, t = 1, 2, …, T). Both of them subject the model to the optimization method used. In the simulation-based optimization [18] there is a complete separation between the model that represents the system and the procedure that is used to solve optimization problems defined within this model. The simulation model can change and evolve to incorporate additional elements, while the optimization routines remain the same; see Swisher and Hyden [19] and Fu et al. [20] for an overview. The theoretical foundations for the model of the optimal control of discrete systems can be found in the work of Boltianski [21]. I will interpret it with some additional information. The principal variable in this approach is discrete time t taking integer values t = 0, 1, 2, …, T, where T is the number of days of time horizon. The state of a system is represented by values of N variables X (Xn, n = 1, 2, …, N) called “state variables”. For each variable Xn (n = 1, 2, …, N) there is a co-ordinate of EN Euclid’s space called “state space”. The state of moving object in time t can be represented as the point of N-dimensional “state space”. Variables, affecting the dynamics of the system and whose values are fixed and known in advance, will be called “circumstances variables”. There will be S circumstances variables p, denoted as (ps, s = 1, 2 , …, S). For each variable ps (s = 1, 2 , …, S) there is a co-ordinate of ES Euclid’s space called “circumstances space”. The circumstances of the moving object in time t can be represented as a point of the S-dimensional “circumstances space”. Finally, there will be R variables whose values are unknown and are to be found according to some criteria. These variables will be called “control variables” and denoted as ur (r = 1 ,2 , …, R). For each variable ur (r = 1, 2, …, R) there is a co-ordinate of ER Euclid’s space called “control space”. A control in time t can be represented as the point of R-dimensional “control space”. Further in the text, superscripts will be used as labels of co-ordinates of appropriate spaces. Subscripts will denote time at which a variable takes a value (current time t or previous time t − 1). Interrelation among all selected variables can be represented by the law of dynamics: javascript:void(0); A state Xt is obtained as a value of the vector function ƒ(Xt−1, pt, ut) based on the state Xt−1 from the previous time t − 1 and values of the circumstances variables pt and control variables ut from the current time t. An un-empty set Ut ∈ (Xt−1, pt) in the space of variables u1, u2, …, uR is to be determined for each state point X ∈ EN and each t = 1, 2, …, T. It is called control domain depending on the value of the state variable Xt−1 from the previous time t − 1 and circumstances variable from the current time t. The control ut can take a value merely from the control domain equation(2) View the MathML sourceut∈Ut(Xt-1,pt),t=1,2,…,T. Turn MathJax on where subscripts denote time at which a variable takes value. Relations of the law of dynamics (1) and control domain (2) determine a discrete controlled object. These relations also represent the simulation model of the moving object. A series of the circumstances points throughout time horizon p1, p2, …, pT is called circumstances of the moving object. A series of the control points throughout time horizon u1, u2, …, uT is called control of the moving object. A series of the state points throughout time horizon X1, X2, …, XT is called trajectory of the moving object. A logical troika (X, p, u) consisted of trajectory (X), circumstances (p) and control (u) is called discrete process. The success of the control will be measured at each time t (t = 1, 2, …, T) by defined function ƒ0(Xt−1, pt, ut). The performance criterion J is an objective functional that adds values of function ƒ0 throughout time horizon, i.e. javascript:void(0);

The model of the inventory control as the discrete system control can be successfully used as a general dynamic model for analyzing inventory dynamics over a finite time horizon in the case of the fixed-order quantity system. When developed in a spreadsheet (tables and charts) it is a great tool for both academics and professionals to better understand dynamics of the inventory on the day by day basis. This model clearly distinguish the law of dynamics, control domain and performance criterion. It is very useful when one analyzes the business decision environment: firstly, establish the law of dynamics; secondly, determine the control domain; thirdly, define an objective function which will be incorporated into the performance criterion. After that, one can perform “what if” analyzes or a meta-heuristics search in order to find the optimal solution which can be simulated and analyzed. The proposed model explicitly defines mathematical relations of the inventory inflow YI and outflow YO for each of possible inventory patterns: discrete inflow – continuous/discrete outflow and continuous inflow – continuous/discrete outflow. The mathematical relation for the inventory inflow YI reflects inventory policy to replenish items whenever stock falls below defined level. The mathematical relation for the inventory outflow YO reflects the model assumption that the demand is known and at a constant rate (continuous or discrete). The main constraint for the control domain secures non-negativity of the stock. Additional constraint can be easily added in order to describe resource scarceness, without corrupting the law of dynamics. Also, the objective function of the performance criterion J can be modified, without corrupting the law of dynamics. Modifications of the objective function can include costs divergences or new costs introduction. Various inventory decision environments can be described by combining the nature of circumstances variables: constant or variable throughout time horizon, independent or dependent on each other. A set of classical inventory models is obtained by modifying EOQ model: Production order quantity model, Quantity discount model, Inventory model with planned shortages, etc., with specific techniques for solving each of their problems. All of them can be presented by the discrete-time system as the scenarios of the special cases of the inventory dynamics. Working with the model of discrete system control, the limitations of the classical model are overcome. The model and searching method are separated. The various searching methods can be used over the model, The presented algorithm of the “total search” finds an optimal discrete process (X, p, u) very fast because there are “just a few discrete process-candidates”. If the model is developed in a spreadsheet, there is no advantage of the simplicity of the classical EOQ model. Moreover, problem of optimal control of discrete system is well structured and there are meta-heuristics algorithms with provably good run times and with provably good or optimal solution quality. As the search methods (meta-heuristics algorithms) are rapidly developing and computers are faster than ever (and will be), the time has come to use simulation-based techniques of the optimal control of discrete system in respect to inventory control both in the education and in professional work.