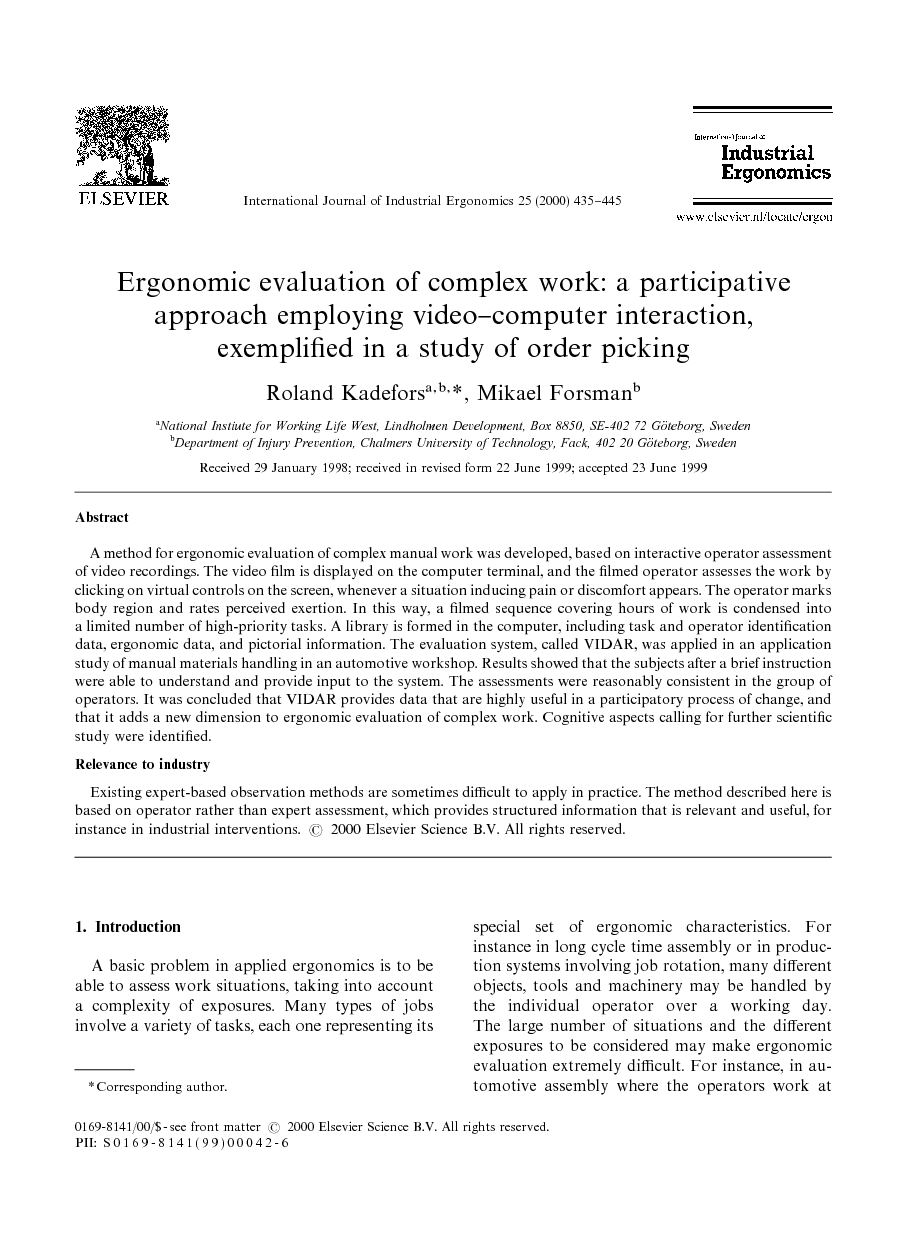 A method for ergonomic evaluation of complex manual work was developed, based on interactive operator assessment of video recordings. The video film is displayed on the computer terminal, and the filmed operator assesses the work by clicking on virtual controls on the screen, whenever a situation inducing pain or discomfort appears. The operator marks body region and rates perceived exertion. In this way, a filmed sequence covering hours of work is condensed into a limited number of high-priority tasks. A library is formed in the computer, including task and operator identification data, ergonomic data, and pictorial information. The evaluation system, called VIDAR, was applied in an application study of manual materials handling in an automotive workshop. Results showed that the subjects after a brief instruction were able to understand and provide input to the system. The assessments were reasonably consistent in the group of operators. It was concluded that VIDAR provides data that are highly useful in a participatory process of change, and that it adds a new dimension to ergonomic evaluation of complex work. Cognitive aspects calling for further scientific study were identified. Relevance to industry Existing expert-based observation methods are sometimes difficult to apply in practice. The method described here is based on operator rather than expert assessment, which provides structured information that is relevant and useful, for instance in industrial interventions.

A basic problem in applied ergonomics is to be able to assess work situations, taking into account a complexity of exposures. Many types of jobs involve a variety of tasks, each one representing its special set of ergonomic characteristics. For instance in long cycle time assembly or in production systems involving job rotation, many different objects, tools and machinery may be handled by the individual operator over a working day. The large number of situations and the different exposures to be considered may make ergonomic evaluation extremely difficult. For instance, in automotive assembly where the operators work at several workstations, if there is a high incidence of shoulder–neck complaints, it may be hard to conclude which situations and tasks should be in focus for ergonomic intervention in the first place. In a series of studies in manufacturing industry, we have endeavored to make ergonomic assessment of long complex work sequences, as a basis for ergonomic interventions. However, we found that only to a limited extent did existing methods meet the demands encountered in practice. For instance, expert-based observation methods (e.g., OWAS, Karhu et al. (1977); PEO, Fransson-Hall et al. (1995); RULA, McAtamney and Corlett (1993)) may indeed provide useful data, but they tend to be too time consuming to be useful in routine analysis of complex tasks, particularly if these tasks are dynamic or hand intensive, such as in assembly work. For this reason, we started development of a new method for ergonomic evaluation of complex work, based on subjective reporting. Demands on this method included,