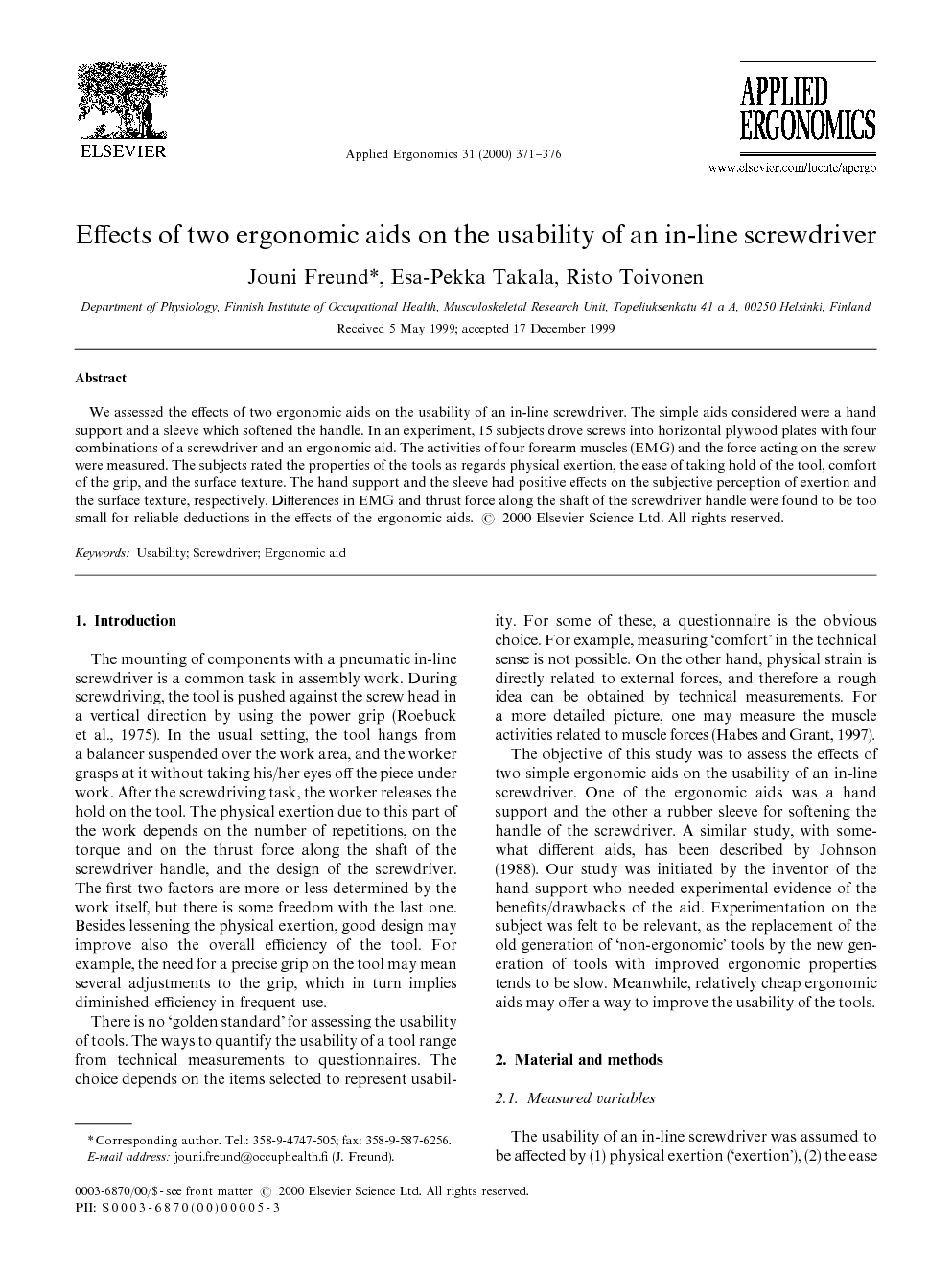 We assessed the effects of two ergonomic aids on the usability of an in-line screwdriver. The simple aids considered were a hand support and a sleeve which softened the handle. In an experiment, 15 subjects drove screws into horizontal plywood plates with four combinations of a screwdriver and an ergonomic aid. The activities of four forearm muscles (EMG) and the force acting on the screw were measured. The subjects rated the properties of the tools as regards physical exertion, the ease of taking hold of the tool, comfort of the grip, and the surface texture. The hand support and the sleeve had positive effects on the subjective perception of exertion and the surface texture, respectively. Differences in EMG and thrust force along the shaft of the screwdriver handle were found to be too small for reliable deductions in the effects of the ergonomic aids.

The mounting of components with a pneumatic in-line screwdriver is a common task in assembly work. During screwdriving, the tool is pushed against the screw head in a vertical direction by using the power grip (Roebuck et al., 1975). In the usual setting, the tool hangs from a balancer suspended over the work area, and the worker grasps at it without taking his/her eyes off the piece under work. After the screwdriving task, the worker releases the hold on the tool. The physical exertion due to this part of the work depends on the number of repetitions, on the torque and on the thrust force along the shaft of the screwdriver handle, and the design of the screwdriver. The first two factors are more or less determined by the work itself, but there is some freedom with the last one. Besides lessening the physical exertion, good design may improve also the overall efficiency of the tool. For example, the need for a precise grip on the tool may mean several adjustments to the grip, which in turn implies diminished efficiency in frequent use. There is no `golden standard’ for assessing the usability of tools. The ways to quantify the usability of a tool range from technical measurements to questionnaires. The choice depends on the items selected to represent usability. For some of these, a questionnaire is the obvious choice. For example, measuring `comfort’ in the technical sense is not possible. On the other hand, physical strain is directly related to external forces, and therefore a rough idea can be obtained by technical measurements. For a more detailed picture, one may measure the muscle activities related to muscle forces (Habes and Grant, 1997). The objective of this study was to assess the effects of two simple ergonomic aids on the usability of an in-line screwdriver. One of the ergonomic aids was a hand support and the other a rubber sleeve for softening the handle of the screwdriver. A similar study, with somewhat different aids, has been described by Johnson (1988). Our study was initiated by the inventor of the hand support who needed experimental evidence of the benefits/drawbacks of the aid. Experimentation on the subject was felt to be relevant, as the replacement of the old generation of `non-ergonomic’ tools by the new generation of tools with improved ergonomic properties tends to be slow. Meanwhile, relatively cheap ergonomic aids may offer a way to improve the usability of the tools.

The usability of hand tools can be assessed in the field or, more quickly, in laboratory experiments. Although the subjects of our study had no previous experience in using a pneumatic screwdriver, it seems that industrial workers do not perform differently from the general population (Johnson, 1988). In fact, selecting the main user group as the study population may not be a good idea, since the previous experience of using some particular screwdriver type can bias the results. The forces exerted in our study were high compared to those of most industrial tasks. The purpose of the relatively high loading was to demonstrate sufficiently great differences between the tools, so they would be detected in an experiment of short duration. It is obvious that the variables of this study were not totally independent, as one may well say that, if the `grip is comfortable’ also `surface texture is good', for example. There exist also other dependencies. The variables are not, however, in one-to-one correspondence and therefore each gives something new to the compound concept called usability. Results of comparative studies like our study have commonly been analyzed with standard statistical procedures like analysis of variance or equal non-parametric methods. Due to the inconsistencies within the ratings, dependencies between the items, and relatively small number of subjects, the assumptions for the standard statistical multivariate analysis are not fulfilled in the present case. We therefore choose the method described which deals with all these restrictions for a standard analysis but still gives mathematically sound unbiased pictures for the ordering of the tools studied. The three sections of the inquiries — after each tool, comparison with the previous tool and the final rating — were constructed so that inconsistent answers were not possible within one section of the questionnaire. A large proportion of inconsistencies in the answers between the sections was taken as an indicator of potential problems. Analysis along these lines indicated that answering the questions on exertion is much easier than quantifying the level of comfort of the grip or the surface texture of the tool (data not shown). The unwanted shift in the scales of measurement may partly explain the inconsistencies (Poulton, 1973). Generally speaking, the shift comes from the tendency of people to fit the range of the given scale to the range of information. Because the subjects were not allowed to test the screwdrivers beforehand, the information concerning the range was almost zero in the beginning and increased gradually during the experiment. In later studies, we will use a short testing stage before the experiment in order to increase the baseline level of information needed for comparisons. Despite the relatively high consistency of the answers concerning exertion, the results of the subjective and objective measures did not match. This causes one to suspect that other muscles or structures than those measured contributed considerably to the perception of exertion. Here, the force and EMG data turned out to be quite uninformative. The result is not in agreement with the observation of Johnson (1988), who found ergonomic aids comparable to the ones used here to reduce the time-averaged EMG values by about 10%. Our results indicate that careful design improves the usability of an in-line screwdriver. The material properties of the handle — low thermal conductivity, and a sufficiently large coefficient of friction and softness — are important factors. A contoured handle fitting the grip and made of plastic or rubber feels comfortable and may also decrease physical exertion. A point overlooked in the design of the old-fashioned models is rotational symmetry. In particular, triggers operated by the fingers increase the need for precision of the grip. This can be quite irritating in work where the tool is used frequently. The simple ergonomic aids seemed to improve some of the properties of the old-fashioned model: the sleeve had a positive effect on the surface texture and the hand support decreased the perception of physical exertion. Therefore, in our opinion, aids such as these should be available, but the workers should be allowed to select aids of their own preferences.