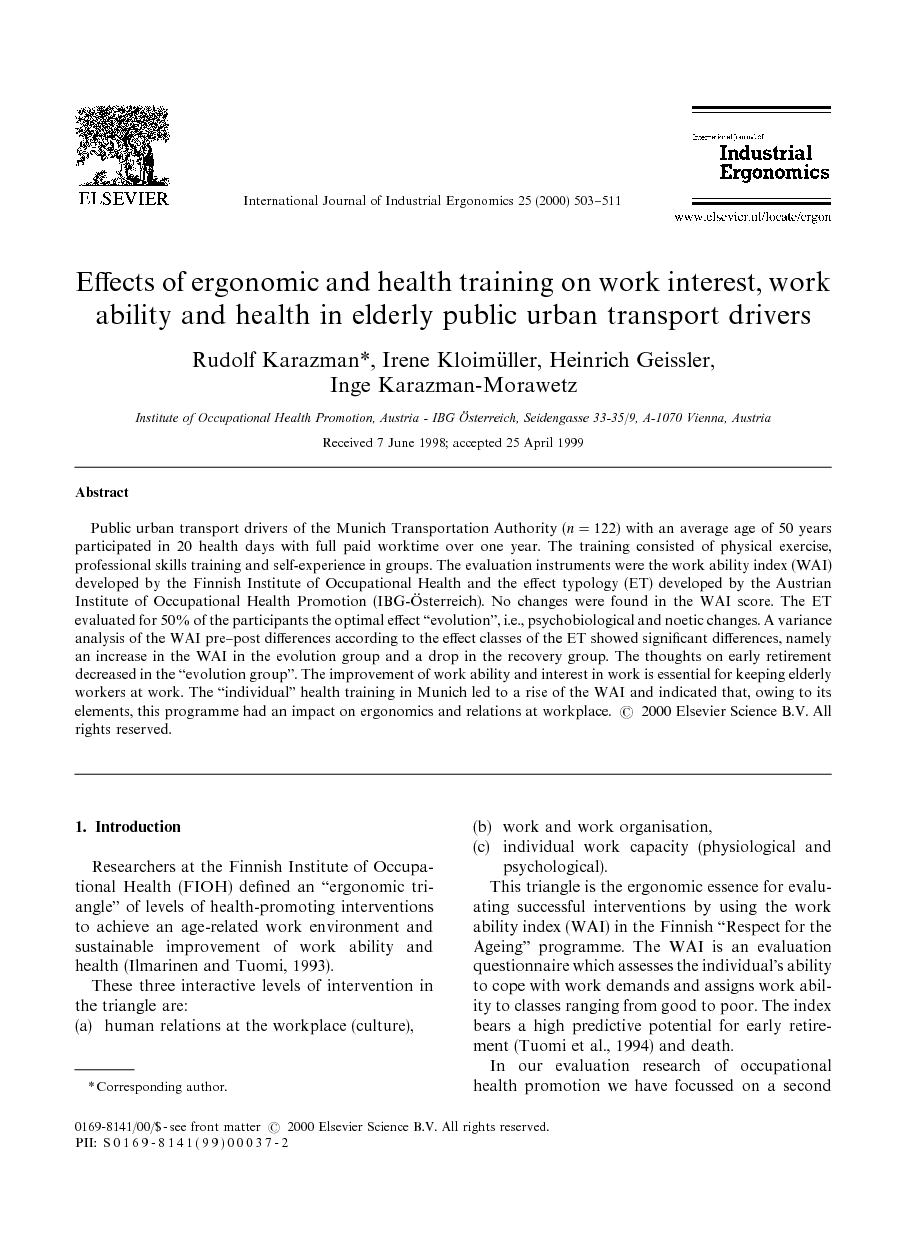 Public urban transport drivers of the Munich Transportation Authority (n=122) with an average age of 50 years participated in 20 health days with full paid worktime over one year. The training consisted of physical exercise, professional skills training and self-experience in groups. The evaluation instruments were the work ability index (WAI) developed by the Finnish Institute of Occupational Health and the effect typology (ET) developed by the Austrian Institute of Occupational Health Promotion (IBG-Österreich). No changes were found in the WAI score. The ET evaluated for 50% of the participants the optimal effect “evolution”, i.e., psychobiological and noetic changes. A variance analysis of the WAI pre–post differences according to the effect classes of the ET showed significant differences, namely an increase in the WAI in the evolution group and a drop in the recovery group. The thoughts on early retirement decreased in the “evolution group”. The improvement of work ability and interest in work is essential for keeping elderly workers at work. The “individual” health training in Munich led to a rise of the WAI and indicated that, owing to its elements, this programme had an impact on ergonomics and relations at workplace

The Munich health promotion programme proved to bear a high salutogenic potential. Not only did the psychobiological parameters of health, well-being and work ability improve in the majority of participants, but so did work interest, personal development and noetic dynamics. This concurrence of psychobiological and noetic changes, evaluated by the ET in the majority of participants, was called “evolution” effect. Participants with such an “evolution” effect showed a significant increase in the WAI score and a decrease in thoughts on early retirement during the programme. In participants with only an improvement of the psychobiological parameters (“relaxation” or “recovery”) in our ET the WAI score dropped and thoughts on early retirement rose during the year of the programme. This coincidence of evolution effect, WAI increase, and decreasing thoughts on early retirement supports our hypothesis that the synergy of improved work ability and increased work interest, i.e., the synergy of psychobiological and noetic dynamics, is a prerequisite for keeping workers in the work process and work force. It is important to note that WAI scores in the “evolution” group rose and WAI scores in the other effect groups remained unchanged, as the Munich occupational health promotion programme was, at first sight, an “individual training programme” and a measure of behaviour prevention. An increase in the WAI score suggests a long-term improvement of health and work ability. And according to the FIOH such a long-term improvement can only be achieved via interventions in all three dimensions of the “triangle of occupational health promotion”. This premise and the increase of the WAI score indicate that the majority of drivers felt that the programme had an impact not only on their “individual” psychobiology, but also on ergonomics at work and relationships at the workplace. According to the structure of the programme, this three-dimensional effect of the programme in the “evolutionists” was induced by the following improvements: • improvement of psychological and somatic resources and abilities, • improvement of social relations among drivers due to and during group process, • improvement of the ergonomic fit between psychosocial work demands (communication, handling of troublesome passengers, coping time pressure, etc.) and the personal skills of the drivers. Our evaluation of this “individual” training showed, on average, unchanged WAI scores for all drivers, on the one hand, an increase in the WAI scores in the “evolution” group. An evolution effect is given when not only psychobiological but also noetic dynamics are induced. The noetic dynamics developed, as interests were renewed and work became effortless again because of improved psycho-biological and ergonomic fitness. The Munich health programme combined classical health training with professional skills training and self-experience in groups. Furthermore, thoughts on early retirement decreased in the evolution group. Previous studies have suggested that the frequency of thoughts on early retirement bear a significant predictive potential for early retirement. Thus on the basis of the two prognostic indicators, the WAI and frequency of thoughts on early retirement, we could expect drivers of the evolution group to stay longer in the work process, but this did not hold true for the other groups without induction of noetic dynamics. This result supports our hypothesis that, so as to keep the elder workforce in the work process, it is absolutely necessary to improve work ability and to increase interest in work by health promotion programmes.