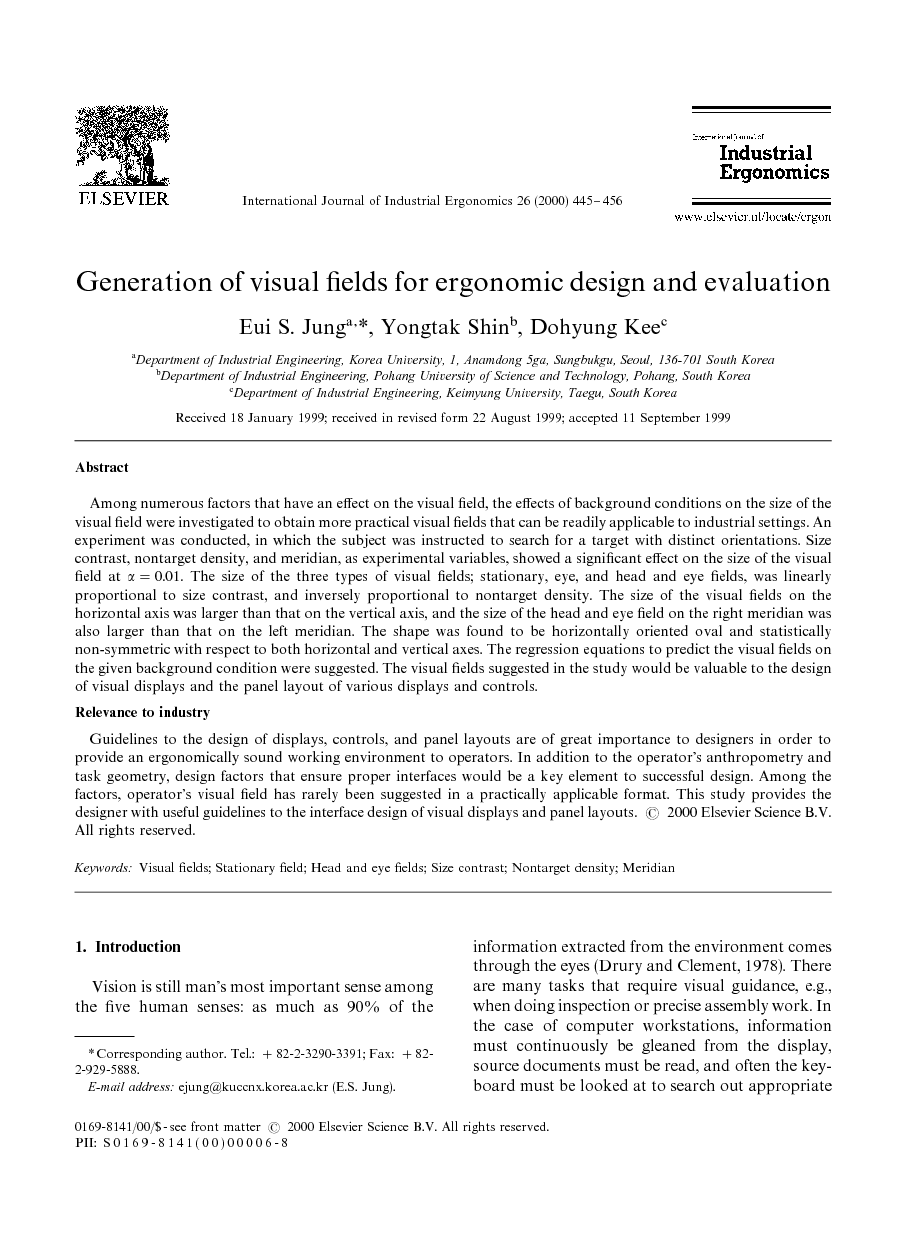 Among numerous factors that have an effect on the visual field, the effects of background conditions on the size of the visual field were investigated to obtain more practical visual fields that can be readily applicable to industrial settings. An experiment was conducted, in which the subject was instructed to search for a target with distinct orientations. Size contrast, nontarget density, and meridian, as experimental variables, showed a significant effect on the size of the visual field at α=0.01. The size of the three types of visual fields; stationary, eye, and head and eye fields, was linearly proportional to size contrast, and inversely proportional to nontarget density. The size of the visual fields on the horizontal axis was larger than that on the vertical axis, and the size of the head and eye field on the right meridian was also larger than that on the left meridian. The shape was found to be horizontally oriented oval and statistically non-symmetric with respect to both horizontal and vertical axes. The regression equations to predict the visual fields on the given background condition were suggested. The visual fields suggested in the study would be valuable to the design of visual displays and the panel layout of various displays and controls. Relevance to industry Guidelines to the design of displays, controls, and panel layouts are of great importance to designers in order to provide an ergonomically sound working environment to operators. In addition to the operator's anthropometry and task geometry, design factors that ensure proper interfaces would be a key element to successful design. Among the factors, operator's visual field has rarely been suggested in a practically applicable format. This study provides the designer with useful guidelines to the interface design of visual displays and panel layouts.

Vision is still man's most important sense among the five human senses: as much as 90% of the information extracted from the environment comes through the eyes (Drury and Clement, 1978). There are many tasks that require visual guidance, e.g., when doing inspection or precise assembly work. In the case of computer workstations, information must continuously be gleaned from the display, source documents must be read, and often the keyboard must be looked at to search out appropriate function keys (Kroemer and Hill, 1986). In visual tasks, only the objects focused on the fovea are seen clearly, while other images become progressively less distinct and blurred as the distance from the fovea increases (Grandjean, 1993). Therefore, visual capacity and limitations of the human operator and task requirements should be properly considered for the optimal arrangement of displays and controls (Salvendy, 1987; Jung et al., 1995). As well known, improper layout or arrangement can produce overload on operators and cause errors. These errors occurring in the control room of nuclear power plants may result in a serious disaster. In order to improve the readability of displays and usability of controls, visual displays and controls should be ergonomically arranged from the early stage of design. Specifically, the location and arrangement of displays and controls should be adapted to the operator's normal viewing angle, the field of view, and the characteristics of eye movements, as well as the operator's visual acuity and visual angles (Kee et al., 1994). Although one's visual field normally covers 180° horizontally and 150° vertically, attention cannot be equally allocated over the entire visual field (Eriksen, 1988). Designers must be able to determine which areas are the most important in their situations. 1.1. Normal viewing angle It is known, in general, that displays should be arranged preferably around the normal line of sight within certain viewing angles. Van Cott and Kinkade (1972) defined the normal line of sight as 10° below the horizontal. Sanders and McCormick (1993) and US military standards (US DoD, 1981) defined the normal line of sight as being 15° below horizontal and the preferred viewing angle to be within ±15° of that line. Eastman Kodak (1983) gives the normal vertical angle of downward rotation of the eyes from the horizontal as being 25–30° for seated reading and standard work, and 40° for seated work. Kroemer and Hill (1986) suggested a preferred viewing cone of 40° opening with its axis approximately 40° below the horizontal when the person sits perfectly upright, and the axis at about 30° when the person leans back slightly behind the horizontal. Kroemer and Hill (1986) and Heuer et al. (1991) showed that the preferred vertical direction of gaze is lower for closer binocular stimuli than for more distant ones. 1.2. Visual field Although the factors that have an effect on the performance of visual tasks were investigated by numerous authors, only a few studies on the visual field have been made up to now. Sanders (1970) classified the visual field into three levels: the stationary field, where peripheral viewing is sufficient; the eye field, where the supplementary use of eye movements is required; and the head field, where head movements are also necessary. Van Cott and Kinkade (1972) suggested the preferred panel location for each display category when arranging visual displays. All warning displays should be within 30° of normal line of sight or 45° for a sit–stand workplace, and the secondary displays within 60° of normal line of sight. According to eye rotations and head rotations, the visual field was classified into four major categories by the US Department of Defense (1981); preferred viewing area, eye field, head field, and head and eye field. Kee et al. (1994) proposed more practical visual fields reflecting the background conditions such as size contrast, nontarget density, and target color, frequently found in real visual tasks. Chan and Courtney (1996) published a review on visual search performance that the visual field, in the form of peripheral acuity or visual lobe area, is a useful concept of predicting visual performance. In this study, following the Sanders’ and US military classification scheme, the visual field was classified into three categories, depending upon whether or not eye and/or head movements are allowed; stationary field, eye field, and head and eye field. 1.3. Purpose of the study Although the visual field can be used as valuable ergonomic design guidelines from the conceptual design stage, existing visual fields, except for Kee et al. (1994) and Chan and Courtney (1998), have been suggested without proper consideration of background conditions of a particular visual task. Furthermore, since all existing visual fields were based on four or less meridians of the vertical and horizontal axes, it is difficult to regenerate practical visual fields that are supposedly of a circular or elliptical shape. In order for the visual field to be used as useful guidelines to reflect the characteristics of visual tasks when designing products or layouts, further studies to consider the background conditions such as background density, size of targets and nontargets, meridian, etc., are greatly needed. In this study, the effects of background conditions on the size of visual field were investigated through a visual experiment, in which nontarget density, target size contrast, and meridian were considered as experimental factors. The visual fields were then presented in the form of regression equations with respect to the background conditions previously mentioned.

As shown in Table 2, it was found that the visual fields were greatly affected by the background conditions. Among the factors considered, the size of a target and its meridian play an important role in determining the size of visual fields. Based on the experimental results, the visual fields were provided in the form of multiple regression models according to the background conditions of nontarget density, size contrast, and meridian. The results are expected to be used as a design guideline when arranging displays and controls on panels such as automobile display panels, cockpits, etc. Further research on the effect of other background conditions such as field heterogeneity, target uncertainty, etc. is also needed.