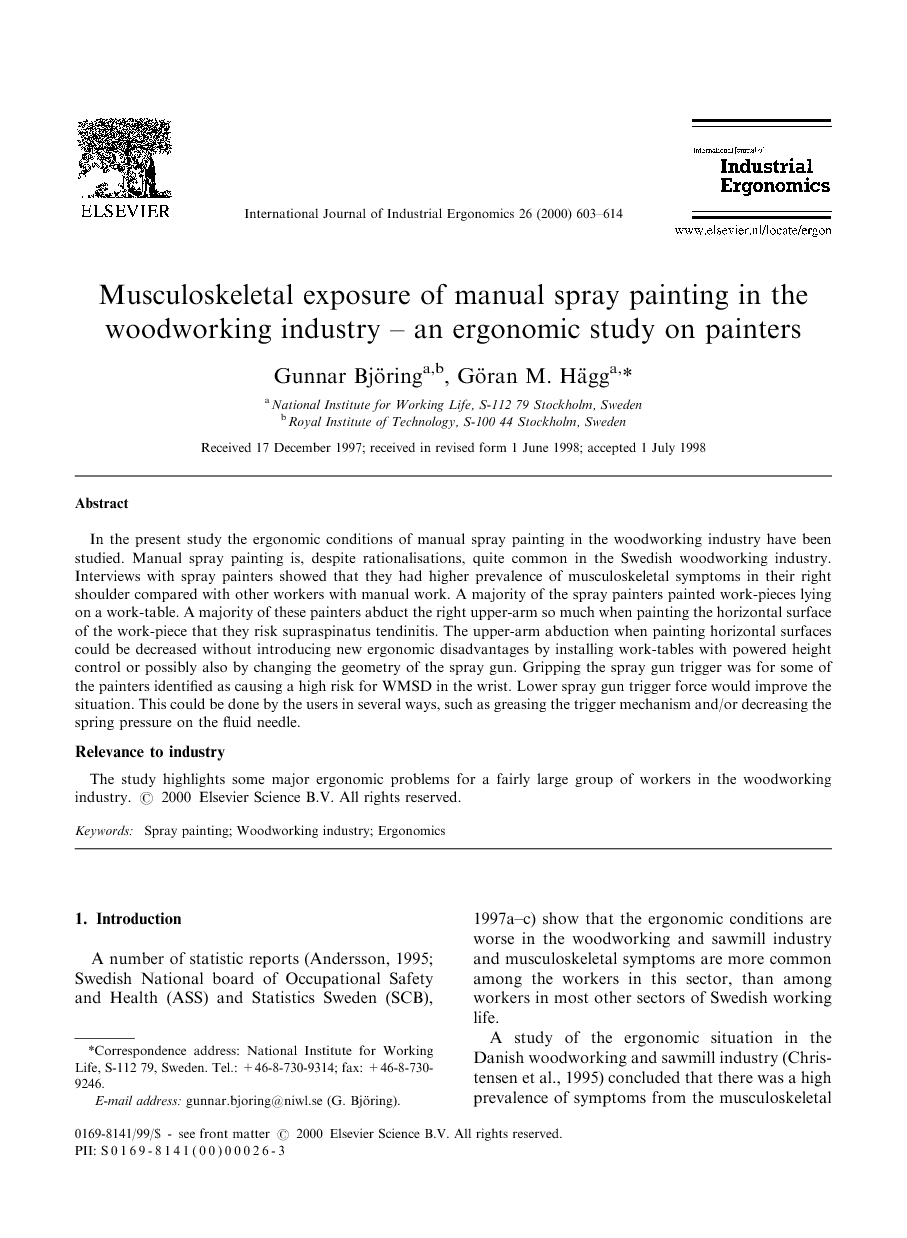 In the present study the ergonomic conditions of manual spray painting in the woodworking industry have been studied. Manual spray painting is, despite rationalisations, quite common in the Swedish woodworking industry. Interviews with spray painters showed that they had higher prevalence of musculoskeletal symptoms in their right shoulder compared with other workers with manual work. A majority of the spray painters painted work-pieces lying on a work-table. A majority of these painters abduct the right upper-arm so much when painting the horizontal surface of the work-piece that they risk supraspinatus tendinitis. The upper-arm abduction when painting horizontal surfaces could be decreased without introducing new ergonomic disadvantages by installing work-tables with powered height control or possibly also by changing the geometry of the spray gun. Gripping the spray gun trigger was for some of the painters identified as causing a high risk for WMSD in the wrist. Lower spray gun trigger force would improve the situation. This could be done by the users in several ways, such as greasing the trigger mechanism and/or decreasing the spring pressure on the fluid needle. Relevance to industry The study highlights some major ergonomic problems for a fairly large group of workers in the woodworking industry.

A number of statistic reports (Andersson, 1995; Swedish National board of Occupational Safety and Health (ASS (1997a), Swedish National board of Occupational Safety and Health (ASS (1997b) and Swedish National board of Occupational Safety and Health (ASS (1997c)) show that the ergonomic conditions are worse in the woodworking and sawmill industry and musculoskeletal symptoms are more common among the workers in this sector, than among workers in most other sectors of Swedish working life. A study of the ergonomic situation in the Danish woodworking and sawmill industry (Christensen et al., 1995) concluded that there was a high prevalence of symptoms from the musculoskeletal system, a high rate of repetitive work with short cycle time, a high rate of manual material handling, and that it is important to identify and quantify critical exposure. Similar data from other countries are missing but the equipment used is mainly the same all over the world, so the working condition may be expected to be the same all over the world. An important task in the woodworking industry is manual spray painting. The Swedish woodworkers union has estimated that approximately 3000 persons have manual spray painting as their main task (approximately 8% of those employed in the sector). Many of them paint flat work-pieces. They either paint both large flat surfaces and edges, or just edges. In the first case the painting is done with the work-piece lying on a work-table and the work-pieces are stored in a drying-rack (in between the painting sessions). In the second case the work-pieces are stacked in piles, and the whole stack is painted on the same occasion. The painters who do not paint flat work-pieces often paint work-pieces which are standing on a work-table or hanging from a conveyor. The spray guns used are either high-pressure, low-pressure, combined, high-volume low-pressure (HVLP) or electrostatic spray guns. High-pressure spray guns create the aerosol through pumping the paint with high pressure through a nozzle, while low-pressure spray guns create the aerosol through spraying compressed air against the paint outside of the nozzle. Combined and HVLP spray guns are combinations of these two methods. Electrostatic spray guns use an electrostatic field to transport the paint to the work-piece. Every method has its advantages in terms of initial costs, productivity, air pollution, etc. The occupational hygiene aspects of manual spray painting have been extensively studied (Bittár et al., 1995), the ergonomic conditions much less so. However, ergonomic studies exist concerning manual spray painting in the engineering industry (Lückner, 1992; Munck-Ulfsfält et al., 1984), and in other occupational groups with similar ergonomic conditions – e.g. welders – musculoskeletal symptoms in the upper extremities constitute a serious problem (Herberts and Kadefors, 1976; Herberts et al., 1981). The aims of the present study were to investigate the prevalence of musculoskeletal symptoms among spray painters, document musculoskeletal exposure when performing manual spray painting, identify hazardous exposure, identify possible relationships between musculoskeletal symptoms and exposure, document the design of workstations and identify possible ways to rearrange the workstations in order to decrease the exposure.