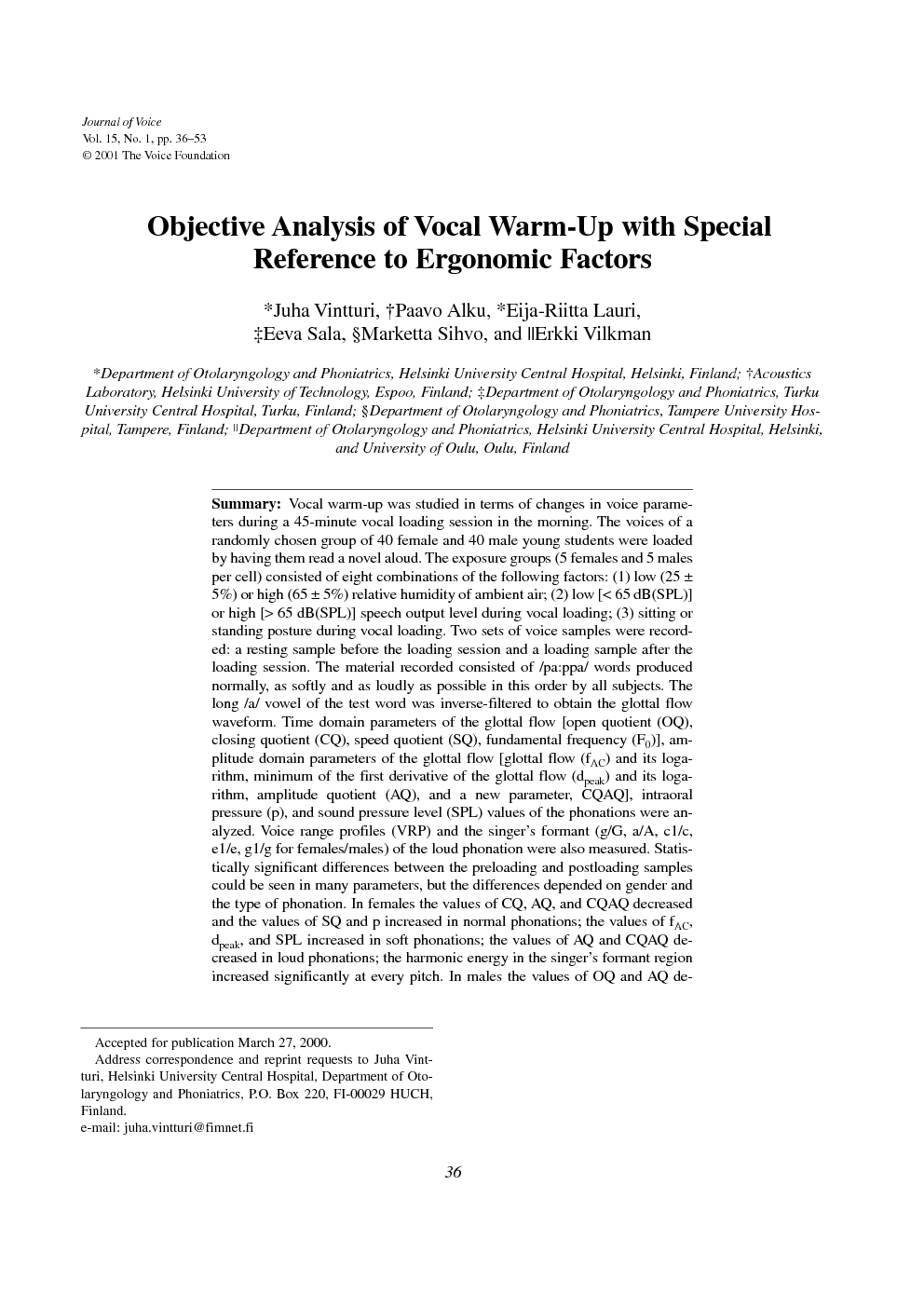 Vocal warm-up was studied in terms of changes in voice parameters during a 45-minute vocal loading session in the morning. The voices of a randomly chosen group of 40 female and 40 male young students were loaded by having them read a novel aloud. The exposure groups (5 females and 5 males per cell) consisted of eight combinations of the following factors: (1) low (< 25 ± 5%) or high (> 65 ± 5%) relative humidity of ambient air; (2) low [< 65 dB(SPL)] or high [> 65 dB(SPL)] speech output level during vocal loading; (3) sitting or standing posture during vocal loading. Two sets of voice samples were recorded: a resting sample before the loading session and a loading sample after the loading session. The material recorded consisted of /pa:ppa/ words produced normally, as softly and as loudly as possible in this order by all subjects. The long /a/ vowel of the test word was inverse-filtered to obtain the glottal flow waveform. Time domain parameters of the glottal flow [open quotient (OQ), closing quotient (CQ), speed quotient (SQ), fundamental frequency (F0)], amplitude domain parameters of the glottal flow [glottal flow (fAC) and its logarithm, minimum of the first derivative of the glottal flow (dpeak) and its logarithm, amplitude quotient (AQ), and a new parameter, CQAQ], intraoral pressure (p), and sound pressure level (SPL) values of the phonations were analyzed. Voice range profiles (VRP) and the singer's formant (g/G, a/A, c1/c, e1/e, g1/g for females/males) of the loud phonation were also measured. Statistically significant differences between the preloading and postloading samples could be seen in many parameters, but the differences depended on gender and the type of phonation. In females the values of CQ, AQ, and CQAQ decreased and the values of SQ and p increased in normal phonations; the values of fAC, dpeak, and SPL increased in soft phonations; the values of AQ and CQAQ decreased in loud phonations; the harmonic energy in the singer's formant region increased significantly at every pitch. In males the values of OQ and AQ decreased and the values of dpeak, F0, p, and SPL increased in normal phonations; the values of fAC and p increased in soft phonations. The changes could be interpreted as signs of a shift toward hyperfunctional voice production. Low humidity was associated with more hyperfunctional changes than high humidity. High output was associated with more hyperfunctional changes than low output. Sitting position was associated with an increasing trend at both margins of male VRP, whereas the case was the opposite for standing position.

In conclusion, it can be stated that vocal WU affects many aspects of voice production in both females and males. In addition, the WU phenomenon is affected by various environmental and ergonomic factors implicit in the work of voice and speech professionals. Considering all WU changes, WU actually shifted the voice production toward the hyperfunctional direction, or even reflected slight hyperfunctioning. It is hoped that the analysis of subjective voice complaints during loading, which is under way, will help to shed light on this result. For instance, it will be interesting to see whether subjects showing more changes toward hyperfunctioning will also report more fatigue, poor motivation, discomfort in the throat, etc., after the loading period compared to others. There were several occasions where the ergonomic factors had a significant influence on WU changes. Ambient humidity affected more parameters than the other two factors in the female subjects. In the male subjects, the output level and posture during loading had effects on more parameters than humidity. Of all the three ergonomic factors, ambient humidity is the only one that already affected the subjects before the test. The ergonomic factors, especially ambient humidity, also had interesting effects on the overall levels of some parameters. This issue is too complex to be discussed here and may deserve further investigation. Briefly, there may be seasonal variation in vocal functions. All in all, it seems necessary to standardize the ergonomic factors as well as the pretest state of voice usage between the subjects before tests aiming to assess minor changes in voice source parameters.