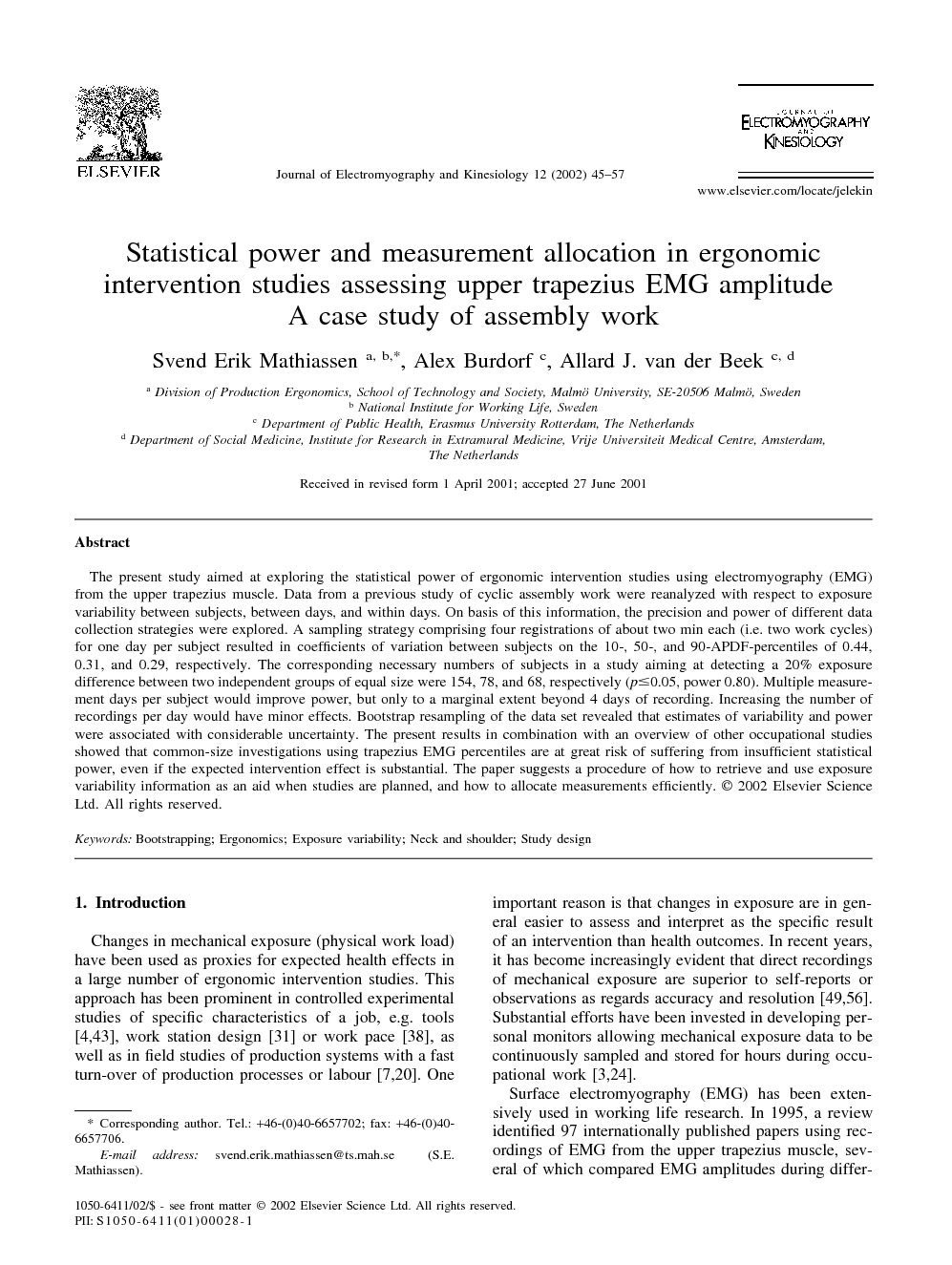 The present study aimed at exploring the statistical power of ergonomic intervention studies using electromyography (EMG) from the upper trapezius muscle. Data from a previous study of cyclic assembly work were reanalyzed with respect to exposure variability between subjects, between days, and within days. On basis of this information, the precision and power of different data collection strategies were explored. A sampling strategy comprising four registrations of about two min each (i.e. two work cycles) for one day per subject resulted in coefficients of variation between subjects on the 10-, 50-, and 90-APDF-percentiles of 0.44, 0.31, and 0.29, respectively. The corresponding necessary numbers of subjects in a study aiming at detecting a 20% exposure difference between two independent groups of equal size were 154, 78, and 68, respectively (p≤0.05, power 0.80). Multiple measurement days per subject would improve power, but only to a marginal extent beyond 4 days of recording. Increasing the number of recordings per day would have minor effects. Bootstrap resampling of the data set revealed that estimates of variability and power were associated with considerable uncertainty. The present results in combination with an overview of other occupational studies showed that common-size investigations using trapezius EMG percentiles are at great risk of suffering from insufficient statistical power, even if the expected intervention effect is substantial. The paper suggests a procedure of how to retrieve and use exposure variability information as an aid when studies are planned, and how to allocate measurements efficiently.

Changes in mechanical exposure (physical work load) have been used as proxies for expected health effects in a large number of ergonomic intervention studies. This approach has been prominent in controlled experimental studies of specific characteristics of a job, e.g. tools [4] and [43], work station design [31] or work pace [38], as well as in field studies of production systems with a fast turn-over of production processes or labour [7] and [20]. One important reason is that changes in exposure are in general easier to assess and interpret as the specific result of an intervention than health outcomes. In recent years, it has become increasingly evident that direct recordings of mechanical exposure are superior to self-reports or observations as regards accuracy and resolution [49] and [56]. Substantial efforts have been invested in developing personal monitors allowing mechanical exposure data to be continuously sampled and stored for hours during occupational work [3] and [24]. Surface electromyography (EMG) has been extensively used in working life research. In 1995, a review identified 97 internationally published papers using recordings of EMG from the upper trapezius muscle, several of which compared EMG amplitudes during different conditions in simulated or real work [39]. Thus, upper trapezius EMG amplitude may serve as a prominent example of a directly recorded exposure variable in ergonomic intervention studies. However, the use of EMG requires considerable resources in terms of equipment, competence and time. Studies assessing upper trapezius EMG amplitude have therefore in general been conducted on small groups, rarely exceeding 15 subjects, as shown by a comprehensive selection of manual handling studies (Table 1). In addition, a majority of the selected studies reported an exposure standard deviation between subjects beyond 50% of the group mean EMG amplitude. The combination of a small study size and a large exposure variability leads to the risk of low statistical power, i.e. an insufficient ability of the study to detect statistically significant differences in exposure. Analyses of power and optimal allocation of measurement resources are widely accepted study design tools, giving guidance to the necessary investment of measurement resources to reach an acceptable chance of success in a planned study, as well as to an efficient use of these resources. So-far, however, these tools have been only sporadically discussed in the context of ergonomic intervention studies in general, and even less so with a specific focus on EMG [5] and [37]. Conventional power analysis accepts that group mean values of exposure may fluctuate according to an observed variance within and between subjects, but it does not take into account that this exposure variance is in itself a stochastic variable, subject to random error [9]. The influence on power estimates of this additional source of uncertainty has not previously been discussed with reference to ergonomic intervention studies. The present investigation had the general purpose of illustrating a procedure for considering statistical power and resource allocation in the design of studies comparing two independent groups. These issues were explored with respect to assessments of upper trapezius EMG amplitude. Data were obtained from a previous study with a repeated-measures design which allowed values of mean exposure and variance components to be derived, as well as their statistical distributions.