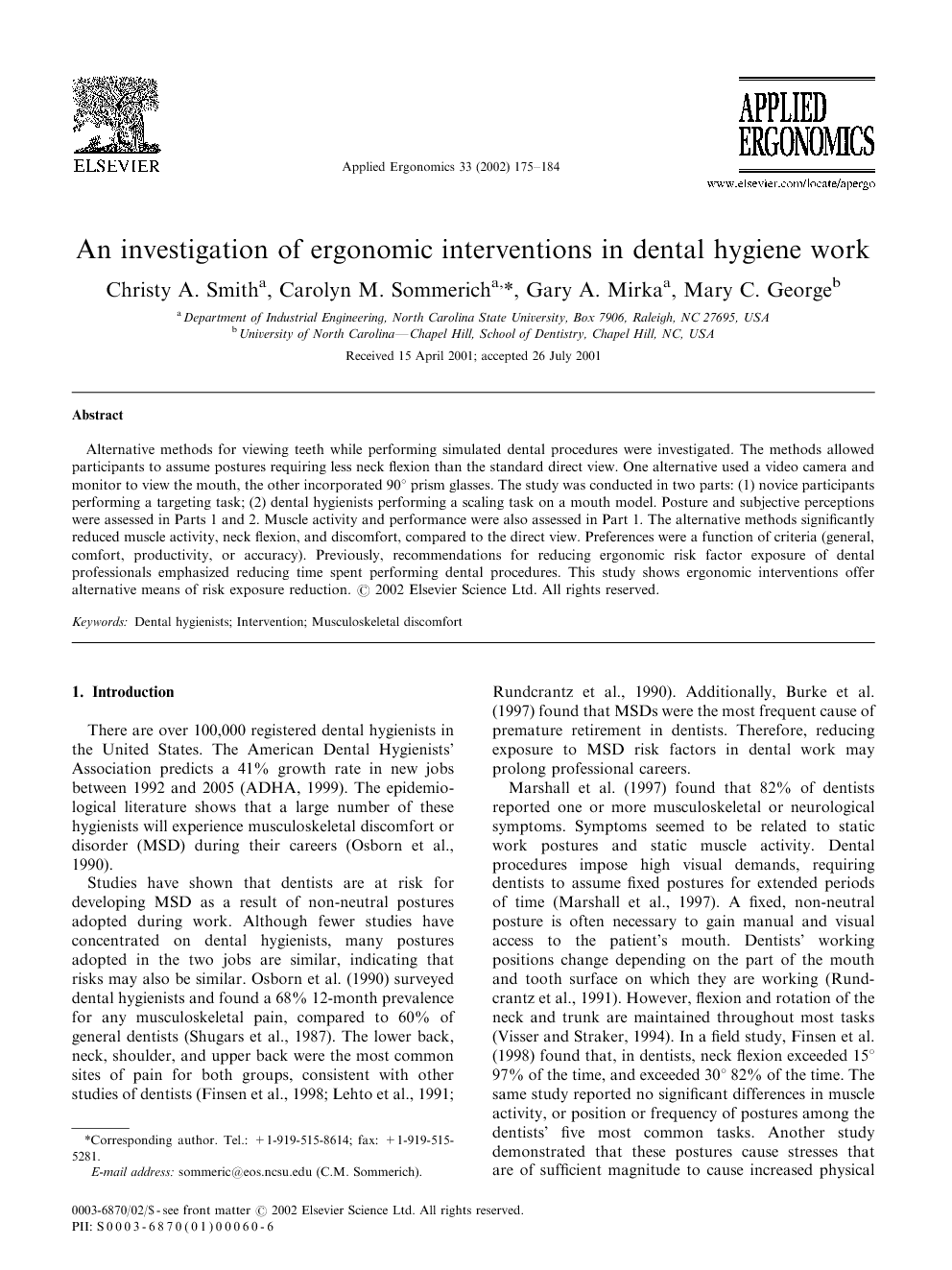 There are over 100,000 registered dental hygienists in the United States. The American Dental Hygienists’ Association predicts a 41% growth rate in new jobs between 1992 and 2005 (ADHA, 1999). The epidemiological literature shows that a large number of these hygienists will experience musculoskeletal discomfort or disorder (MSD) during their careers (Osborn et al., 1990). Studies have shown that dentists are at risk for developing MSD as a result of non-neutral postures adopted during work. Although fewer studies have concentrated on dental hygienists, many postures adopted in the two jobs are similar, indicating that risks may also be similar. Osborn et al. (1990) surveyed dental hygienists and found a 68% 12-month prevalence for any musculoskeletal pain, compared to 60% of general dentists (Shugars et al., 1987). The lower back, neck, shoulder, and upper back were the most common sites of pain for both groups, consistent with other studies of dentists (Finsen et al., 1998; Lehto et al., 1991; Rundcrantz et al., 1990). Additionally, Burke et al. (1997) found that MSDs were the most frequent cause of premature retirement in dentists. Therefore, reducing exposure to MSD risk factors in dental work may prolong professional careers. Marshall et al. (1997) found that 82% of dentists reported one or more musculoskeletal or neurological symptoms. Symptoms seemed to be related to static work postures and static muscle activity. Dental procedures impose high visual demands, requiring dentists to assume fixed postures for extended periods of time (Marshall et al., 1997). A fixed, non-neutral posture is often necessary to gain manual and visual access to the patient's mouth. Dentists’ working positions change depending on the part of the mouth and tooth surface on which they are working (Rundcrantz et al., 1991). However, flexion and rotation of the neck and trunk are maintained throughout most tasks (Visser and Straker, 1994). In a field study, Finsen et al. (1998) found that, in dentists, neck flexion exceeded 15° 97% of the time, and exceeded 30° 82% of the time. The same study reported no significant differences in muscle activity, or position or frequency of postures among the dentists’ five most common tasks. Another study demonstrated that these postures cause stresses that are of sufficient magnitude to cause increased physical discomfort throughout the workday (Visser and Straker, 1994). Given the high prevalence of MSD among dental professionals, it is important that recommendations be made to reduce risk exposures. Although biomechanical analyses and epidemiological studies point to awkward, static postures as a primary risk factor, suggestions for risk factor reduction by changing posture have been limited. Several studies recommended that dental professionals include office and laboratory work in between patients, take more breaks, and work shorter hours (Visser and Straker, 1994; Finsen et al., 1998). However, many dental professionals may be unwilling or unable to make these changes. Future recommendations should allow dental professionals to maintain current levels of productivity, while reducing the risk of developing MSD. As such, a study was designed to evaluate two interventions that could improve postures while performing dental procedures: use of 90° prism glasses, and a camera/monitor set-up. Prism glasses are recommended by occupational therapists to patients who have restricted neck flexion capacity. The video camera/monitor set-up is similar to fiber optic systems currently used in the medical field for detailed vision. It was hypothesized that the interventions would allow a dental professional to assume more neutral head and neck postures during work, resulting in reduced muscle activity and discomfort. Typically, early-stage investigations of workplace intervention ideas are conducted in settings that permit a high degree of control, such as a laboratory, and they are conducted with participants who are enrolled from the general population. This important investigational phase allows for evaluation of basic premises of the intervention, use of immovable pieces of measurement equipment, and study of work that cannot readily be observed “in the field” due to any number of reasons (patient privacy, dangerous environments, etc.). However, such study designs have rather low face validity, due to, among other things, the high degree of control imposed through choice of task, instructions, or many other possible means and the use of participants from the general population, rather than from specific, relevant work populations (Drury, 1995). With these factors in mind, it was determined that the current study would be designed in two parts. Part 1 was designed as a traditional lab-based study, wherein novice subjects from the general population would perform a simple targeting task to simulate dental hygiene work. Both objective and subjective measures would be collected, in order to evaluate the interventions and compare them to the current work method. Objective measures would include muscle activity and posture, as well as performance of the targeting task. Participants would also be asked to provide subjective preference ratings of the various methods. Following this investigation would be Part 2, in which dental hygienists would perform a scaling task on a mouth model. With participants from the appropriate work population and a task that would be closer in reality to the tasks dental hygienists typically perform, the face validity of Part 2 would be increased over that of Part 1. Due to time concerns expressed by dental hygienists who were consulted while the study was being designed, it was decided to forego the recording of muscle activity data in Part 2. In the following sections, methods and results are presented first for Part 1, then for Part 2. A single Discussion section reviews results from both parts of the study.

This study was a first step in looking at engineering control-type interventions that could be used by hygienists to reduce the occurrence of MSD in the neck region. Results highlight characteristics of the traditional direct viewing method that can lead to MSDs commonly found among hygienists. Results showed that the direct view generated higher levels of neck muscle activity, more non-neutral postures, and greater neck discomfort, compared to the monitor and prism alternatives. Although tasks performed in the two parts of the study were different, similarities of postures adopted by subjects indicate that the tasks probably placed similar demands on the body. Long-term benefits of using either of the proposed interventions could be great. Improved posture could reduce existing musculoskeletal discomfort and prevent development of future MSDs. In turn, this may improve the hygienist's work satisfaction level, reduce injury time from work and burnout, and extend careers in dental hygiene. Dentists could also benefit through use of the interventions, as could others who perform detailed work that requires a flexed neck posture.