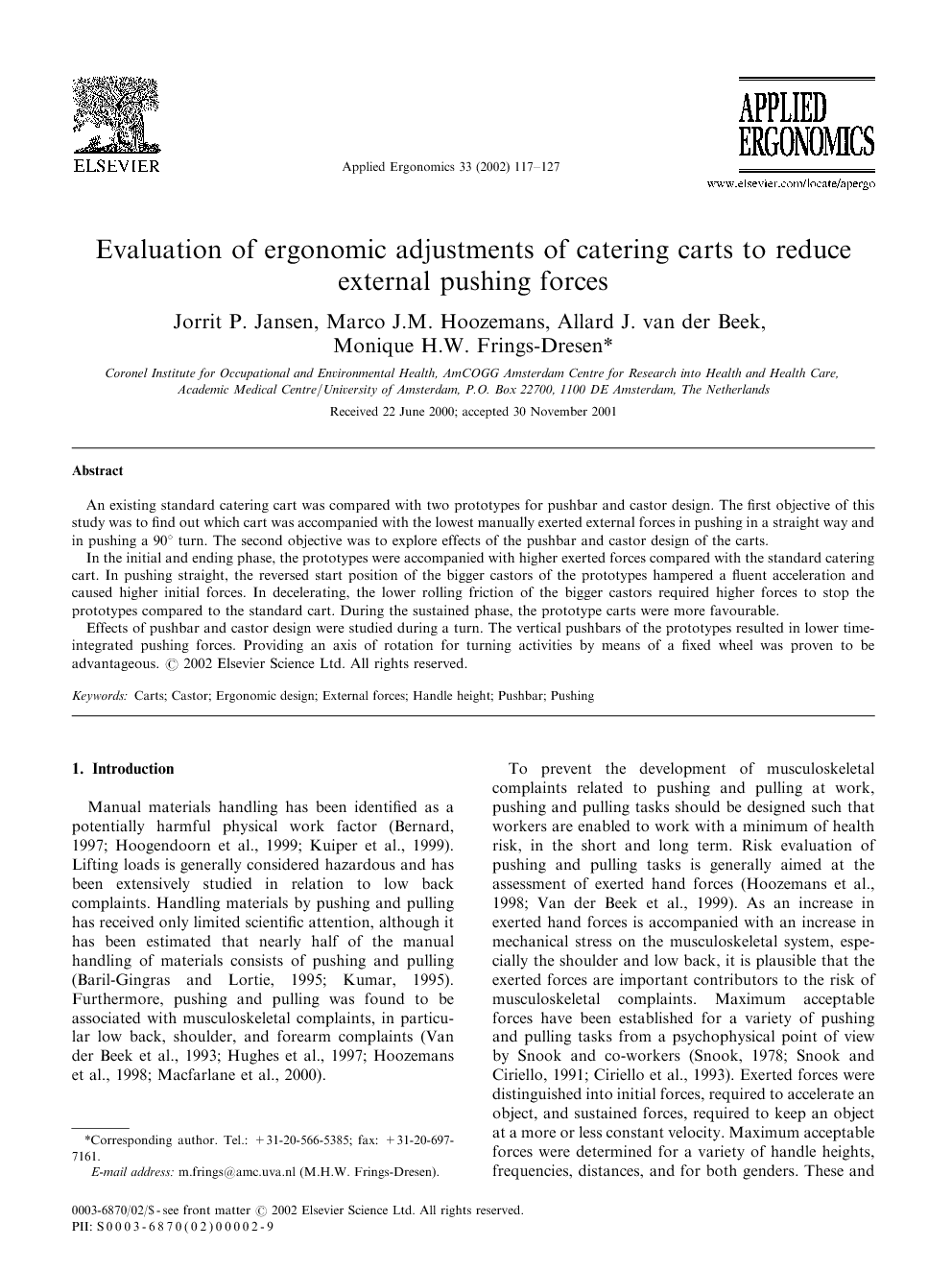 An existing standard catering cart was compared with two prototypes for pushbar and castor design. The first objective of this study was to find out which cart was accompanied with the lowest manually exerted external forces in pushing in a straight way and in pushing a 90° turn. The second objective was to explore effects of the pushbar and castor design of the carts. In the initial and ending phase, the prototypes were accompanied with higher exerted forces compared with the standard catering cart. In pushing straight, the reversed start position of the bigger castors of the prototypes hampered a fluent acceleration and caused higher initial forces. In decelerating, the lower rolling friction of the bigger castors required higher forces to stop the prototypes compared to the standard cart. During the sustained phase, the prototype carts were more favourable. Effects of pushbar and castor design were studied during a turn. The vertical pushbars of the prototypes resulted in lower time-integrated pushing forces. Providing an axis of rotation for turning activities by means of a fixed wheel was proven to be advantageous.

Manual materials handling has been identified as a potentially harmful physical work factor (Bernard, 1997; Hoogendoorn et al., 1999; Kuiper et al., 1999). Lifting loads is generally considered hazardous and has been extensively studied in relation to low back complaints. Handling materials by pushing and pulling has received only limited scientific attention, although it has been estimated that nearly half of the manual handling of materials consists of pushing and pulling (Baril-Gingras and Lortie, 1995; Kumar, 1995). Furthermore, pushing and pulling was found to be associated with musculoskeletal complaints, in particular low back, shoulder, and forearm complaints (Van der Beek et al., 1993; Hughes et al., 1997; Hoozemans et al., 1998; Macfarlane et al., 2000). To prevent the development of musculoskeletal complaints related to pushing and pulling at work, pushing and pulling tasks should be designed such that workers are enabled to work with a minimum of health risk, in the short and long term. Risk evaluation of pushing and pulling tasks is generally aimed at the assessment of exerted hand forces (Hoozemans et al., 1998; Van der Beek et al., 1999). As an increase in exerted hand forces is accompanied with an increase in mechanical stress on the musculoskeletal system, especially the shoulder and low back, it is plausible that the exerted forces are important contributors to the risk of musculoskeletal complaints. Maximum acceptable forces have been established for a variety of pushing and pulling tasks from a psychophysical point of view by Snook and co-workers (Snook, 1978; Snook and Ciriello, 1991; Ciriello et al., 1993). Exerted forces were distinguished into initial forces, required to accelerate an object, and sustained forces, required to keep an object at a more or less constant velocity. Maximum acceptable forces were determined for a variety of handle heights, frequencies, distances, and for both genders. These and several other aspects of pushing and pulling tasks have recently been reviewed in relation to the level of exerted forces (Hoozemans et al., 1998). Generally, handle height has received a lot of scientific attention. For pulling, maximum acceptable forces and maximum exerted forces were found to increase with lower handle heights (Warwick et al., 1980; Chaffin et al., 1983; Snook and Ciriello, 1991; Fothergill et al., 1992; Mital et al., 1997). For pushing, contradictory results were reported but, generally, the highest maximum acceptable forces were found at about 1 m (Snook and Ciriello, 1991; Mital et al., 1997). However, from studies that examined the mechanical load at the low back and shoulder it can be concluded that higher handle heights are preferable (Lee et al., 1991; Resnick and Chaffin, 1995; Van der Woude et al., 1995; De Looze et al., 2000, Hoozemans et al., 2000). Ergonomic interventions concerning handle height are often easy to accomplish and should be focussed on reducing the magnitude of the exerted forces. For instance, for pushing or pulling a 181 kg cart, Al-Eisawi et al. (1999a) reported lower exerted forces as handle height increased. Another ergonomic aspect influencing the exerted forces is castor design, recently studied by Al-Eisawi et al. (1999b). They investigated the effect of castor width, castor diameter, castor orientation, cart weight, and floor type. No effect was found for castor width. However, it has been found that the minimum required initial push forces increased with smaller wheel diameters and that these forces proportionally increased with cart weight. Although the influence of castor orientation on the minimum required initial push forces was not consistent, in general the magnitude of these forces were smallest with all wheels aligned in the forward direction. With regard to floor type, the lowest rolling friction has been found for pushing/pulling on smooth concrete and tile, and the highest rolling friction on asphalt and industrial carpet. The present study was based on a question arising from a Dutch catering service, whose employees are daily exposed to pushing catering carts. To reduce the musculoskeletal problems reported by the employees, the existing standard catering cart (SCC) was redesigned at the initiative of the catering service. Two new types of catering carts were developed by adjustments to the pushbar and castor design of the SCC. The catering service wanted the adjusted carts to be evaluated from an ergonomic point of view. Most of the studies mentioned above, concerning ergonomic aspects of pushing and pulling devices, are based on laboratory experiments. The present study was performed in the workplace environment to be able to draw more practical conclusions. The aim of this study was twofold: (i) to test the hypothesis that pushing two new types of catering carts under different conditions resembling normal working situations, involves lower manually exerted external forces than pushing the SCC and (ii) to explore effects of the pushbar and castor design of the carts and of the experimental conditions.