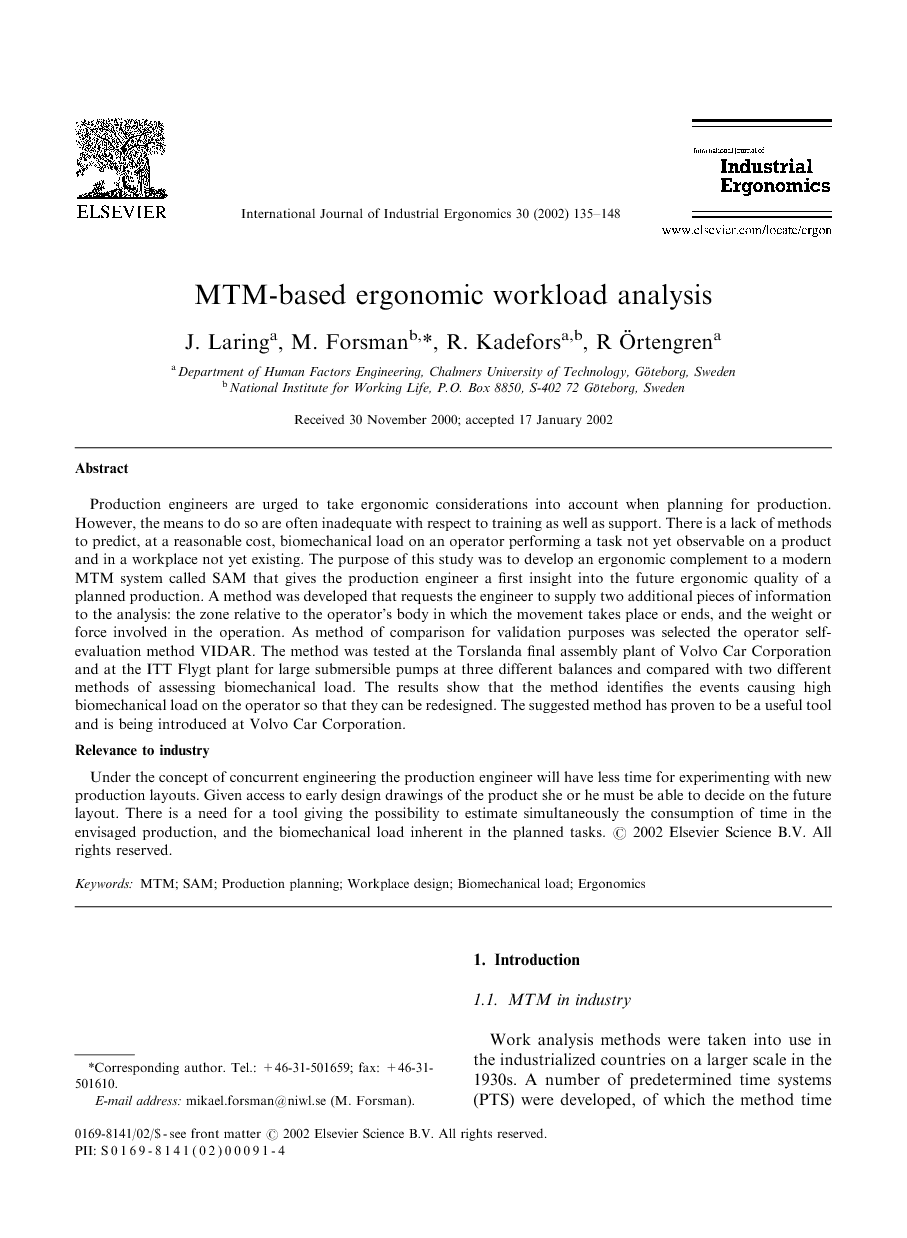 Production engineers are urged to take ergonomic considerations into account when planning for production. However, the means to do so are often inadequate with respect to training as well as support. There is a lack of methods to predict, at a reasonable cost, biomechanical load on an operator performing a task not yet observable on a product and in a workplace not yet existing. The purpose of this study was to develop an ergonomic complement to a modern MTM system called SAM that gives the production engineer a first insight into the future ergonomic quality of a planned production. A method was developed that requests the engineer to supply two additional pieces of information to the analysis: the zone relative to the operator's body in which the movement takes place or ends, and the weight or force involved in the operation. As method of comparison for validation purposes was selected the operator self-evaluation method VIDAR. The method was tested at the Torslanda final assembly plant of Volvo Car Corporation and at the ITT Flygt plant for large submersible pumps at three different balances and compared with two different methods of assessing biomechanical load. The results show that the method identifies the events causing high biomechanical load on the operator so that they can be redesigned. The suggested method has proven to be a useful tool and is being introduced at Volvo Car Corporation. Relevance to industry Under the concept of concurrent engineering the production engineer will have less time for experimenting with new production layouts. Given access to early design drawings of the product she or he must be able to decide on the future layout. There is a need for a tool giving the possibility to estimate simultaneously the consumption of time in the envisaged production, and the biomechanical load inherent in the planned tasks.

It is concluded from the present study that ErgoSAM can predict high load situations from the different tasks during the work sequence. Repetitive tasks are prevalent in manual industrial work and the source of many work related diseases, and ErgoSAM has the potential of being a tool for early detection of such risks. The method is proven to estimate correctly biomechanical load occurrence. When comparing different alternatives for technical and organizational design of a future production system, it will be possible to optimize with respect to productivity and biomechanical load simultaneously. The present system should be seen as a prototype, and the present paper as an evaluation of some basic properties of the ErgoSAM method. If ErgoSAM is to be used as a future tool by production engineers it is of vital importance to point out what type of musculoskeletal strains that are not identified by ErgoSAM. This may be done in the form of a checklist that is presented to the engineer in a suitable manner during the ErgoSAM analysis. To get a well-grounded insight in the usefulness of ErgoSAM there is a clear need for extensive continued validation e.g. many balances and many operators. Such work is presently being carried out by the National Institute for Working Life at Göteborg in cooperation with the two companies Volvo Car Corporation and ITT Flygt in Emmaboda, Sweden. Recently, based on these and more recent findings (Christmansson et al., 2000), Volvo Cars have decided to use the ErgoSAM method in their future planning work. It has been found that albeit there are imperfections in the method, it provides information in the planning stage that is not available in the present design tools.