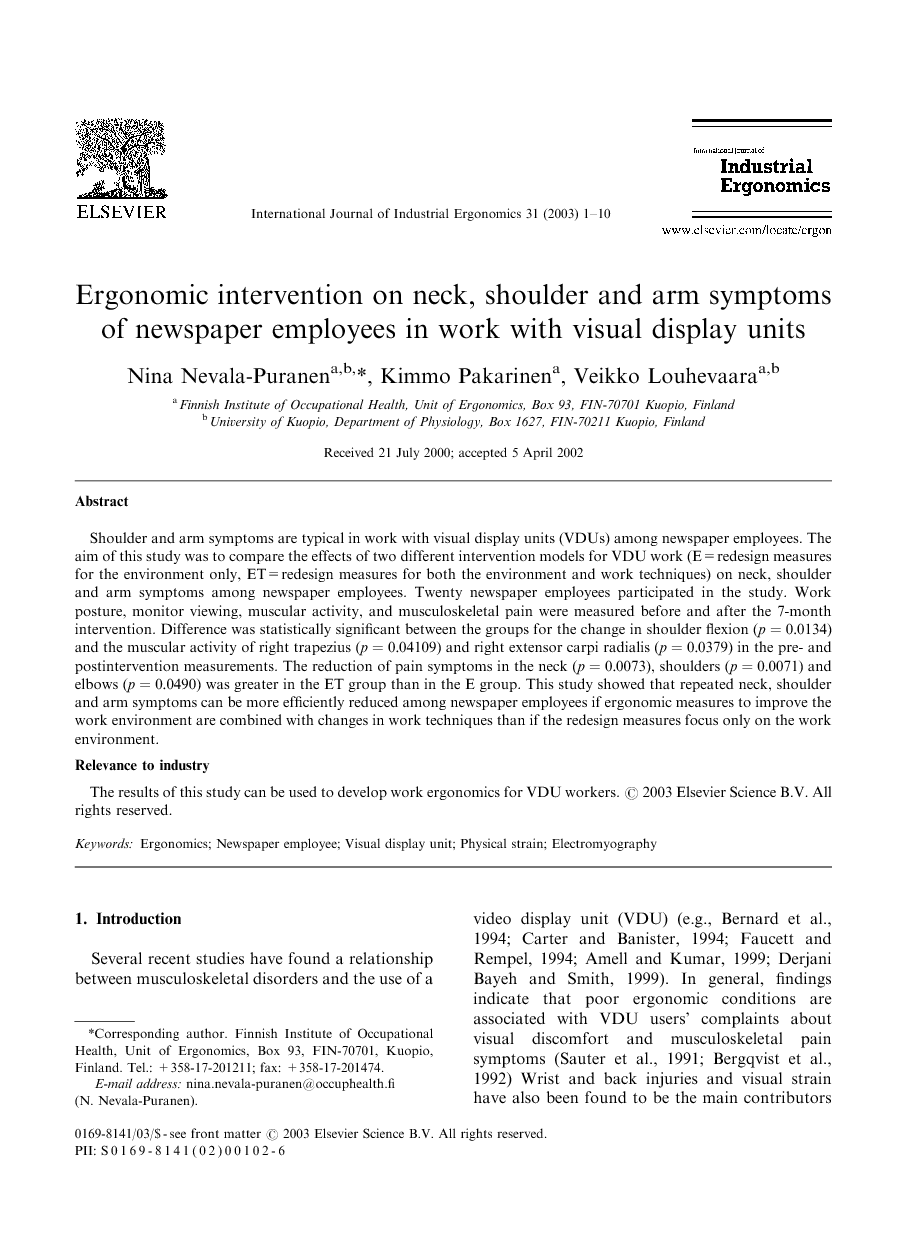 Shoulder and arm symptoms are typical in work with visual display units (VDUs) among newspaper employees. The aim of this study was to compare the effects of two different intervention models for VDU work (E=redesign measures for the environment only, ET=redesign measures for both the environment and work techniques) on neck, shoulder and arm symptoms among newspaper employees. Twenty newspaper employees participated in the study. Work posture, monitor viewing, muscular activity, and musculoskeletal pain were measured before and after the 7-month intervention. Difference was statistically significant between the groups for the change in shoulder flexion (p=0.0134) and the muscular activity of right trapezius (p=0.04109) and right extensor carpi radialis (p=0.0379) in the pre- and postintervention measurements. The reduction of pain symptoms in the neck (p=0.0073), shoulders (p=0.0071) and elbows (p=0.0490) was greater in the ET group than in the E group. This study showed that repeated neck, shoulder and arm symptoms can be more efficiently reduced among newspaper employees if ergonomic measures to improve the work environment are combined with changes in work techniques than if the redesign measures focus only on the work environment. Relevance to industry The results of this study can be used to develop work ergonomics for VDU workers.

Several recent studies have found a relationship between musculoskeletal disorders and the use of a video display unit (VDU) (e.g., Bernard et al., 1994; Carter and Banister, 1994; Faucett and Rempel, 1994; Amell and Kumar, 1999; Derjani Bayeh and Smith, 1999). In general, findings indicate that poor ergonomic conditions are associated with VDU users’ complaints about visual discomfort and musculoskeletal pain symptoms (Sauter et al., 1991; Bergqvist et al., 1992) Wrist and back injuries and visual strain have also been found to be the main contributors to workdays lost due to VDU-related injuries (Abib and Dutta, 1998). In addition, according to the cross-sectional study of Bernard et al. (1994), newspaper workers more frequently report neck (26%), hand or wrist (22%), shoulder (17%), and elbow (10%) symptoms than any other symptoms. Work-related musculoskeletal disorders in the neck–shoulder area and upper limbs seem to be affected by work-related, individual, and social factors (Armstrong et al., 1993; Bongers et al., 1993; Nelson and Silverstein, 1998). Bernard et al. (1994) showed that increased work load due to time pressure and a high number of hours of computer use were related to the occurrence of work-related musculoskeletal disorders, particularly for those in the hand and wrist area, among newspaper employees. However, studies often use different case definitions and the results therefore lack comparability like Beaton et al. (2000) showed in a study among newspaper workers. Faucett and Rempel (1994) also reported that upper limb disorders increased among VDU workers as the daily use of a VDU increased and decision latitude decreased. According to Carter and Banister (1994) musculoskeletal discomfort in association with VDU work is attributable to static muscle load and repetitive work. Continuous keyboard work, deviated wrist positions, seating posture and individual wrist size are reported to be related to carpal tunnel syndrome (Matias and Salvendy, 1998). According to Bergqvist et al. (1995) and Karlqvist et al (1996) and Karlqvist et al (1998) upper limb symptoms are connected to the use of forearms in an unsupported position, the placement of the keyboard, long periods of work with a mouse, and a non-optical location of the mouse on the table. Insufficient table space has also been shown to be related to neck–shoulder discomfort (Sauter et al., 1991). Some intervention studies suggest that development of ergonomics decrease musculoskeletal pain symptoms in VDU work. Aarås et al. (1998) reported a controlled ergonomic intervention study in which the lighting system, workstations and optometric examinations were redesigned for VDU operators. In the follow-up, 2 years after the intervention, static trapezius load and shoulder pain were reduced only in the study groups. Nelson and Silverstein (1998) identified a range of factors associated with an observed reduction of musculoskeletal pain when office workers were moved to a new building. They found that the reduction in upper-limb symptoms was associated with improved satisfaction with the physical workstation, whereas the reduction in neck, shoulder and back discomfort was associated with improved chair comfort, fewer housekeeping responsibilities, and female gender. Derjani Bayeh and Smith (1999) reported a longitudinal intervention field study, that included three levels of ergonomic interventions, each adding incrementally to the previous one. Reductions in self-reported musculoskeletal discomfort were found for all three levels of incremental ergonomic interventions, but the improvement in health was statistically significant for intervention group A (workstation layout changes, VDT workstation accessories, a steelcase chair) and group B (workstation layout changes, VDT workstation accessories) but not in group C (workstation layout changes). According to Lee et al. (1992) various physical exercise programs have been introduced for VDU operators, but the effectiveness of the programs is questionable. Hinman et al. (1997) reported a controlled intervention study in which a computerized exercise program (exercise 15 min per session, twice a day during 8 weeks) did not affect perceived physical or psychological stress of asymptomatic VDT users. The aim of our study was to compare the effects of 2 different intervention models (E=redesign measures for the environment only, ET=redesign measures for both the environment and work techniques) on the neck, shoulder and arm symptoms of newspaper employees.