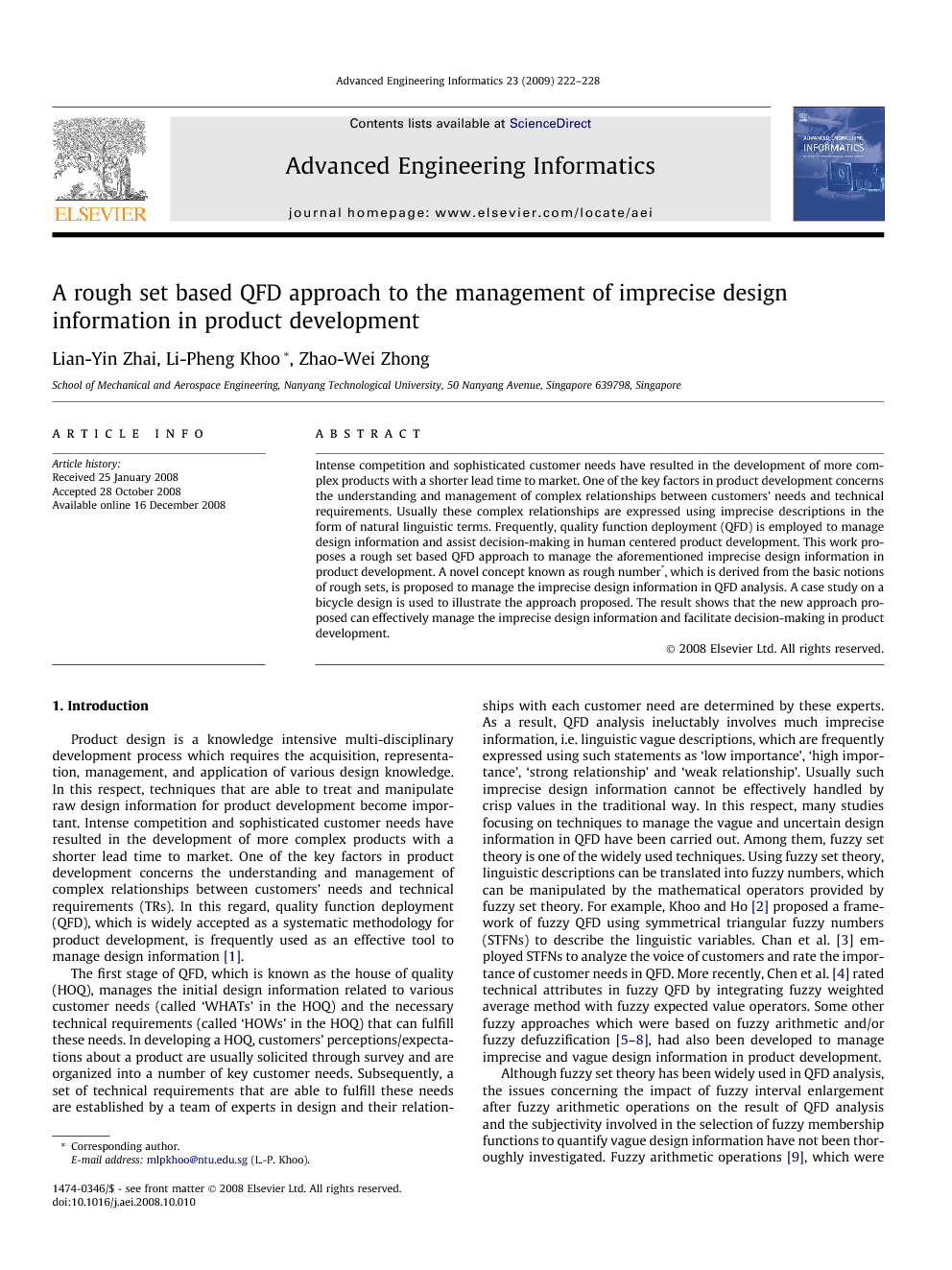 Product design is a knowledge intensive multi-disciplinary development process which requires the acquisition, representation, management, and application of various design knowledge. In this respect, techniques that are able to treat and manipulate raw design information for product development become important. Intense competition and sophisticated customer needs have resulted in the development of more complex products with a shorter lead time to market. One of the key factors in product development concerns the understanding and management of complex relationships between customers’ needs and technical requirements (TRs). In this regard, quality function deployment (QFD), which is widely accepted as a systematic methodology for product development, is frequently used as an effective tool to manage design information [1]. The first stage of QFD, which is known as the house of quality (HOQ), manages the initial design information related to various customer needs (called ‘WHATs’ in the HOQ) and the necessary technical requirements (called ‘HOWs’ in the HOQ) that can fulfill these needs. In developing a HOQ, customers’ perceptions/expectations about a product are usually solicited through survey and are organized into a number of key customer needs. Subsequently, a set of technical requirements that are able to fulfill these needs are established by a team of experts in design and their relationships with each customer need are determined by these experts. As a result, QFD analysis ineluctably involves much imprecise information, i.e. linguistic vague descriptions, which are frequently expressed using such statements as ‘low importance’, ‘high importance’, ‘strong relationship’ and ‘weak relationship’. Usually such imprecise design information cannot be effectively handled by crisp values in the traditional way. In this respect, many studies focusing on techniques to manage the vague and uncertain design information in QFD have been carried out. Among them, fuzzy set theory is one of the widely used techniques. Using fuzzy set theory, linguistic descriptions can be translated into fuzzy numbers, which can be manipulated by the mathematical operators provided by fuzzy set theory. For example, Khoo and Ho [2] proposed a framework of fuzzy QFD using symmetrical triangular fuzzy numbers (STFNs) to describe the linguistic variables. Chan et al. [3] employed STFNs to analyze the voice of customers and rate the importance of customer needs in QFD. More recently, Chen et al. [4] rated technical attributes in fuzzy QFD by integrating fuzzy weighted average method with fuzzy expected value operators. Some other fuzzy approaches which were based on fuzzy arithmetic and/or fuzzy defuzzification [5], [6], [7] and [8], had also been developed to manage imprecise and vague design information in product development. Although fuzzy set theory has been widely used in QFD analysis, the issues concerning the impact of fuzzy interval enlargement after fuzzy arithmetic operations on the result of QFD analysis and the subjectivity involved in the selection of fuzzy membership functions to quantify vague design information have not been thoroughly investigated. Fuzzy arithmetic operations [9], which were extended from interval analysis [10], such as the addition and multiplication operations used in QFD analysis, may lead to the enlargement of the resultant fuzzy intervals [11]. Accordingly, the enlargement of fuzzy intervals may have an impact on QFD analysis. On the other hand, as suggested by Jin [12], selection of membership functions is critical for the performance of a fuzzy system. Thus, it has been one of the challenging research topics in the field of fuzzy set applications. More specifically, in the applications of subjective evaluations and heuristics, where fuzzy sets are used to model the cognitive process of human beings, the determination of membership functions is usually based on experience and intuition [12] and [13]. In practice, certain types of functions such as triangular, trapezoidal, Gaussian or bell-shaped functions are often used. Although some more sophisticated and objective methods such as neural networks can be employed to tune the membership functions through learning/training process [14] and [15], in the early stages of product development, such learning/training process may not be realistic or even feasible because the available data are very limited [16]. This work attempts to address these issues by using a different approach and proposes a novel concept known as rough number∗ to manage the imprecise design information in product development. The concept of rough number∗ is directly derived from the basic notion of approximations in rough set theory. The rest of the paper is organized as follows. Section two reviews the basic concepts of rough set theory and highlights its advantages in dealing with imprecise information. Section 3 proposes a novel concept known as rough number∗, which is derived using the basic notion of rough approximations. Similar to fuzzy arithmetic, a set of arithmetic operations enabling the manipulation of rough number∗s for QFD analysis, based on the interval analysis [10], are proposed. Section four describes a QFD case study on a bicycle design to illustrate the approach developed. Finally, the major conclusions achieved in this work are summarized in Section 5.