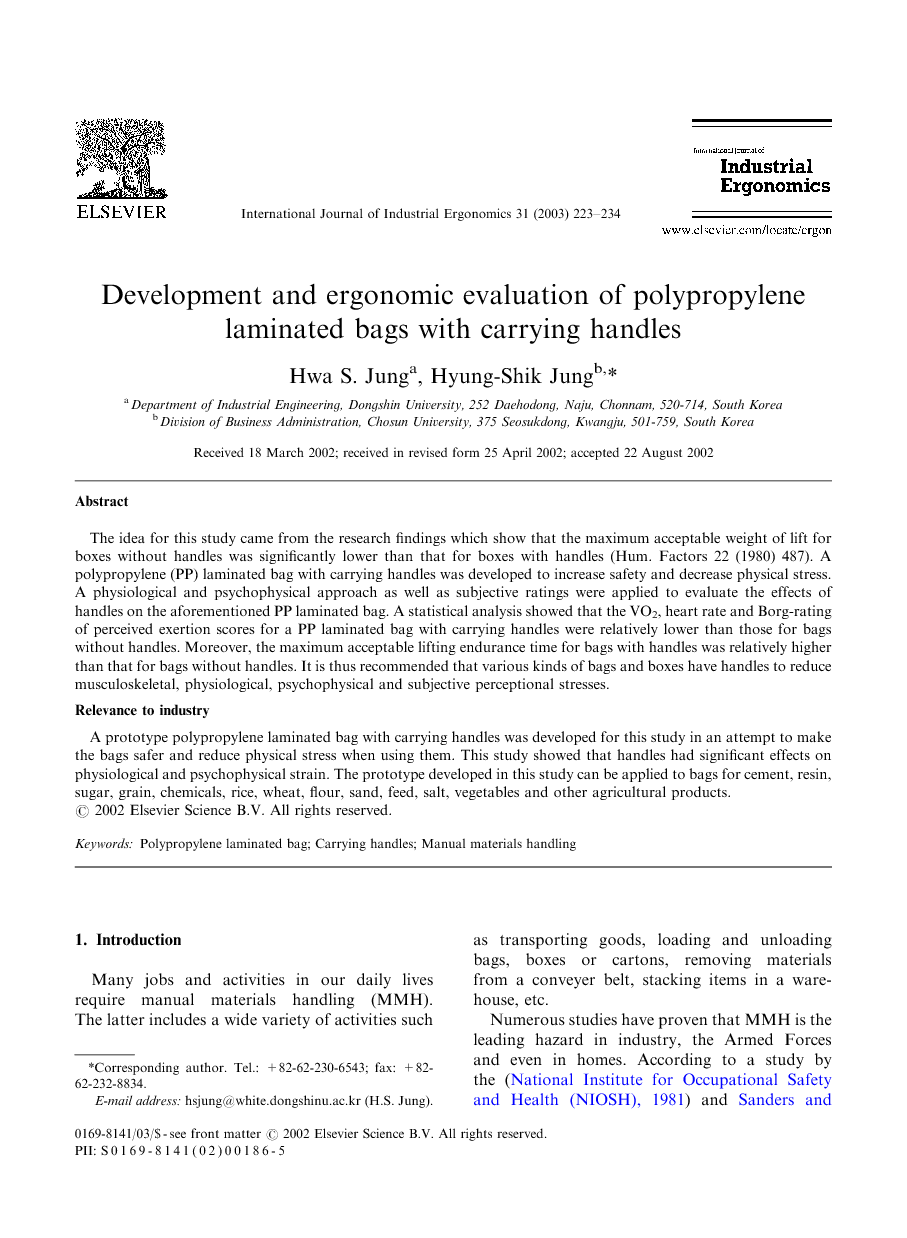 The idea for this study came from the research findings which show that the maximum acceptable weight of lift for boxes without handles was significantly lower than that for boxes with handles (Hum. Factors 22 (1980) 487). A polypropylene (PP) laminated bag with carrying handles was developed to increase safety and decrease physical stress. A physiological and psychophysical approach as well as subjective ratings were applied to evaluate the effects of handles on the aforementioned PP laminated bag. A statistical analysis showed that the VO2, heart rate and Borg-rating of perceived exertion scores for a PP laminated bag with carrying handles were relatively lower than those for bags without handles. Moreover, the maximum acceptable lifting endurance time for bags with handles was relatively higher than that for bags without handles. It is thus recommended that various kinds of bags and boxes have handles to reduce musculoskeletal, physiological, psychophysical and subjective perceptional stresses. Relevance to industry A prototype polypropylene laminated bag with carrying handles was developed for this study in an attempt to make the bags safer and reduce physical stress when using them. This study showed that handles had significant effects on physiological and psychophysical strain. The prototype developed in this study can be applied to bags for cement, resin, sugar, grain, chemicals, rice, wheat, flour, sand, feed, salt, vegetables and other agricultural products.

Many jobs and activities in our daily lives require manual materials handling (MMH). The latter includes a wide variety of activities such as transporting goods, loading and unloading bags, boxes or cartons, removing materials from a conveyer belt, stacking items in a warehouse, etc. Numerous studies have proven that MMH is the leading hazard in industry, the Armed Forces and even in homes. According to a study by the (National Institute for Occupational Safety and Health (NIOSH), 1981) and Sanders and McCormick (1992), the job risk factors due to MMH, which causes physical stress, are seemingly limitless. Some of the factors identified as potential sources of physical stress are as follows: weight and position of the load's center of gravity with respect to the worker; temporal aspects of the task in terms of repeated handling; consistency in the location of the load's center of gravity when handling bulky or liquid materials; coupling (texture, handle size and location, shape, color); spatial aspects of the task in terms of movement distance, direction, obstacles and postural constraints and, environmental factors such as temperature, humidity, illumination, noise, vibration and the frictional stability of the foot. Biomechanical, physiological and psychophysical stresses are affected by various characteristics of the object being lifted (Sanders and McCormick, 1992). Weight and its distribution, shape, stiffness and the availability of handles and similar coupling devices are the object characteristics that must be considered in the design process of lifting tasks according to Ayoub and Mital (1982) and Ayoub (1977). Many other studies have also found that these characteristics of the object being lifted influence biomechanical, physiological and psychophysical stresses. For example, the size of the object affects maximum acceptable weight of load (MAWL), energy expenditure and spinal stresses (Ayoub and Mital, 1989). The size of the object affects MAWL and the CG-L5/S1 distance (Garg and Saxena, 1980; Mital and Okolie, 1982; Smith and Jiang, 1984). The distribution and stability of the object affect MAWL (Ayoub and Mital, 1989), and according to Garg and Saxena (1980), the handles of the object also affect MAWL. Research findings indicate that working with loads with handles is safer and less stressful than working with the same kinds of loads without handles (Drury, 1980; Garg and Saxena, 1980). In their report, Garg and Saxena (1980) state that the average MAWL for six different box dimensions tested without handles was lower (ranging from 4.0% to 11.5% with the average decrease being 7.2%) than that for boxes with handles. Furthermore, Ciriello et al. (1993) reported that the maximum acceptable weights were about 16% lower when no handles were used. They concluded, based on boxes with handles, that the load recommendations for MAWL need to be adjusted when applied to boxes without handles or to other types of containers. Many other studies have shown that handles can improve performance and comfort. Rigby (1973) showed that containers fitted with handles were less likely to be dropped. Drury (1980) stated that handholds reduce oxygen consumption in a lifting task by 11% and could increase the exerted forces by up to 20% as compared to no handholds or handles. Ayoub and LoPresti (1971) and many others (Khalil, 1973; Pheasant and O’Neill, 1975; Rigby, 1973; Saran, 1973; Woodson and Conover, 1964) discovered that the diameter of a handle affected grip strength and EMG activities. A prototype polypropylene (PP) laminated bag with carrying handles was developed for this study in an attempt to make the bags safer and reduce physical stress when using them. PP laminated bags are widely used as containers for fertilizer, chemicals and many agricultural products. A physiological and psychophysical approach as well as subjective ratings were applied to evaluate the effects of handles on the developed PP laminated bag.

Since physical labor and MMH will continue to be part of life, the possibility of accidents—injuries to the back and arms in particular—will always exist. Obviously, all hazardous and stressful MMH tasks cannot be avoided. Much can be done, however, to reduce the level of risk to which many workers are exposed. It stands to reason that by redesigning the work, especially the object, with principles of sound human factors in mind, injuries and illnesses associated with MMH can be reduced. Based on objective and subjective estimates, this study showed that handles had significant effects on physiological and psychophysical strain. These findings support the research conducted by Garg and Saxena (1980) which shows that among the variables (object size, handles and container type) they studied, handles had the most profound effect on the amount of weight that a person could lift safely. A biomechanical approach should be taken to further evaluate the effect of handles on musculoskeletal stress. In addition, MALET must be extensively tested, and the standardization procedure must be performed in future studies. From a human factors engineering point of view, it is recommended that various kinds of bags and boxes have handles to reduce musculoskeletal, physiological, psychophysical and also subjective perceptional stresses. The prototype developed in this study can be applied to bags for cement, resin, sugar, grain, chemicals, rice, wheat, flour, sand, feed, salt, vegetables and other agricultural products.