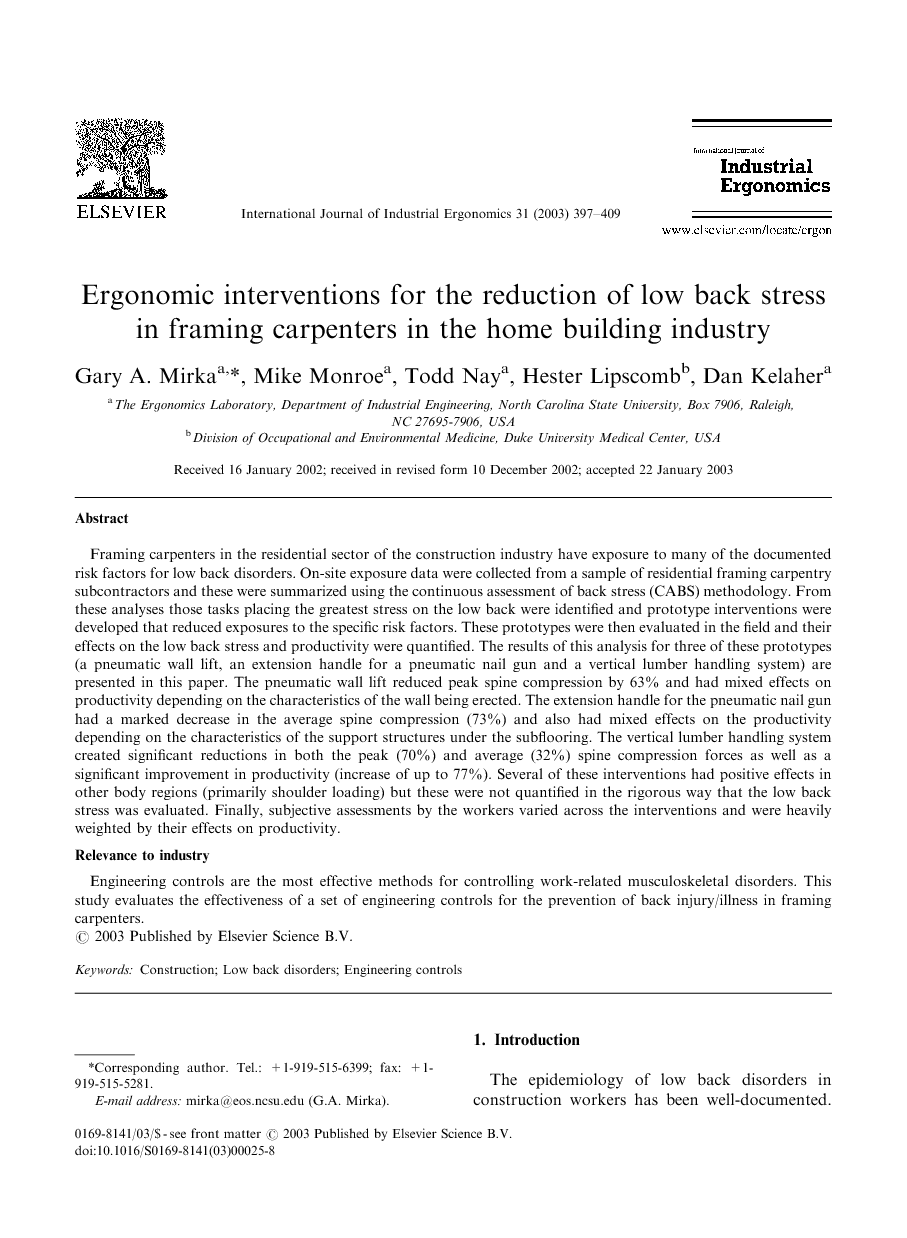 Framing carpenters in the residential sector of the construction industry have exposure to many of the documented risk factors for low back disorders. On-site exposure data were collected from a sample of residential framing carpentry subcontractors and these were summarized using the continuous assessment of back stress (CABS) methodology. From these analyses those tasks placing the greatest stress on the low back were identified and prototype interventions were developed that reduced exposures to the specific risk factors. These prototypes were then evaluated in the field and their effects on the low back stress and productivity were quantified. The results of this analysis for three of these prototypes (a pneumatic wall lift, an extension handle for a pneumatic nail gun and a vertical lumber handling system) are presented in this paper. The pneumatic wall lift reduced peak spine compression by 63% and had mixed effects on productivity depending on the characteristics of the wall being erected. The extension handle for the pneumatic nail gun had a marked decrease in the average spine compression (73%) and also had mixed effects on the productivity depending on the characteristics of the support structures under the subflooring. The vertical lumber handling system created significant reductions in both the peak (70%) and average (32%) spine compression forces as well as a significant improvement in productivity (increase of up to 77%). Several of these interventions had positive effects in other body regions (primarily shoulder loading) but these were not quantified in the rigorous way that the low back stress was evaluated. Finally, subjective assessments by the workers varied across the interventions and were heavily weighted by their effects on productivity. Relevance to industry Engineering controls are the most effective methods for controlling work-related musculoskeletal disorders. This study evaluates the effectiveness of a set of engineering controls for the prevention of back injury/illness in framing carpenters.

The epidemiology of low back disorders in construction workers has been well-documented. In their summary of the Bureau of Labors Statistics data from 1995 to 1997, Mital et al. (1999) noted that construction workers were second only to the transportation and public utilities sector in the incidence rate for injuries involving days away from work with back pain. Framing carpenters in the residential sector of the construction industry have exposure to a number of recognized occupational risk factors for back pain including heavy work, materials handling, pushing, twisting, frequent lifting over 25 pounds, requirements for sudden, unexpected, near-maximal effort, awkward trunk postures, and static loading (e.g. Andersson, 1981; Bernold and Guler, 1993; Frymoyer et al., 1983; Schneider and Susi, 1994). One of the challenging aspects of ergonomic research for this group is the large inter- and intra-individual variability in exposure, which is influenced by factors such as work assignments or tasks, stage of the construction project, number of workers on-site, and individual work patterns/techniques. Other challenges face ergonomists interested in developing engineering controls for this industry. First, the work sites of these individuals are constantly changing (moving from place to place within a site as well as moving from home site to home site)—making it more difficult to study their work exposures and impossible to permanently modify the work environment as is often done in more traditional industrial environments. Interventions such as improved housekeeping on job sites are likely to benefit most workers but task-specific interventions are much more challenging because of variability in process and technique in crews and individuals, respectively. Finally, for interventions to have an impact on the incidence and severity of work-related low back disorders two things must happen: (1) the intervention must reduce stress on the structures of the low back and (2) the interventions must be used and used properly. There are a number of challenges in developing an intervention that addresses both of these issues. First the intervention must be cost-effective, showing a net positive relationship between the cost of the intervention and the productivity gains to be realized through the use of the intervention. For small sub-contractors particularly, who typically work on extremely tight budgets, the payback period for the intervention often needs to be on the order of weeks for it to even be considered. Second, the intervention must be easy to transport both from site to site and from place to place within a site. An intervention that is cumbersome to move cannot only have a negative impact on overall productivity, but may also introduce new ergonomic or safety concerns. Third, the change caused by the intervention must be within the comfort zone of both management and the workers. Resistance to change in process and technique is a challenge that must be met with any significant change brought on by the intervention (Hecker et al., 2000; Spielholz and Davis, 2001). All of these issues must be considered in the intervention development/evaluation process. The specific aim of this project was to develop a set of ergonomic interventions for framing carpenters in the home building industry and to quantify the impact of these interventions on the lumbar biomechanical stress and productivity of the associated tasks as well as the subjective impressions of the workers as to the overall utility of the intervention.

The interventions evaluated for these framing carpentry tasks generated significant reductions in the peak and average spine compression values experienced during these specific work tasks. The increase in productivity averaged across all interventions was 28% but was often dependent on the specific characteristics of the task. The subjective impressions of the workers towards these interventions was mixed. In general, those interventions that improved productivity were enthusiastically embraced while those that slowed them down, regardless of how well it reduced the loads on the back, were not considered feasible.