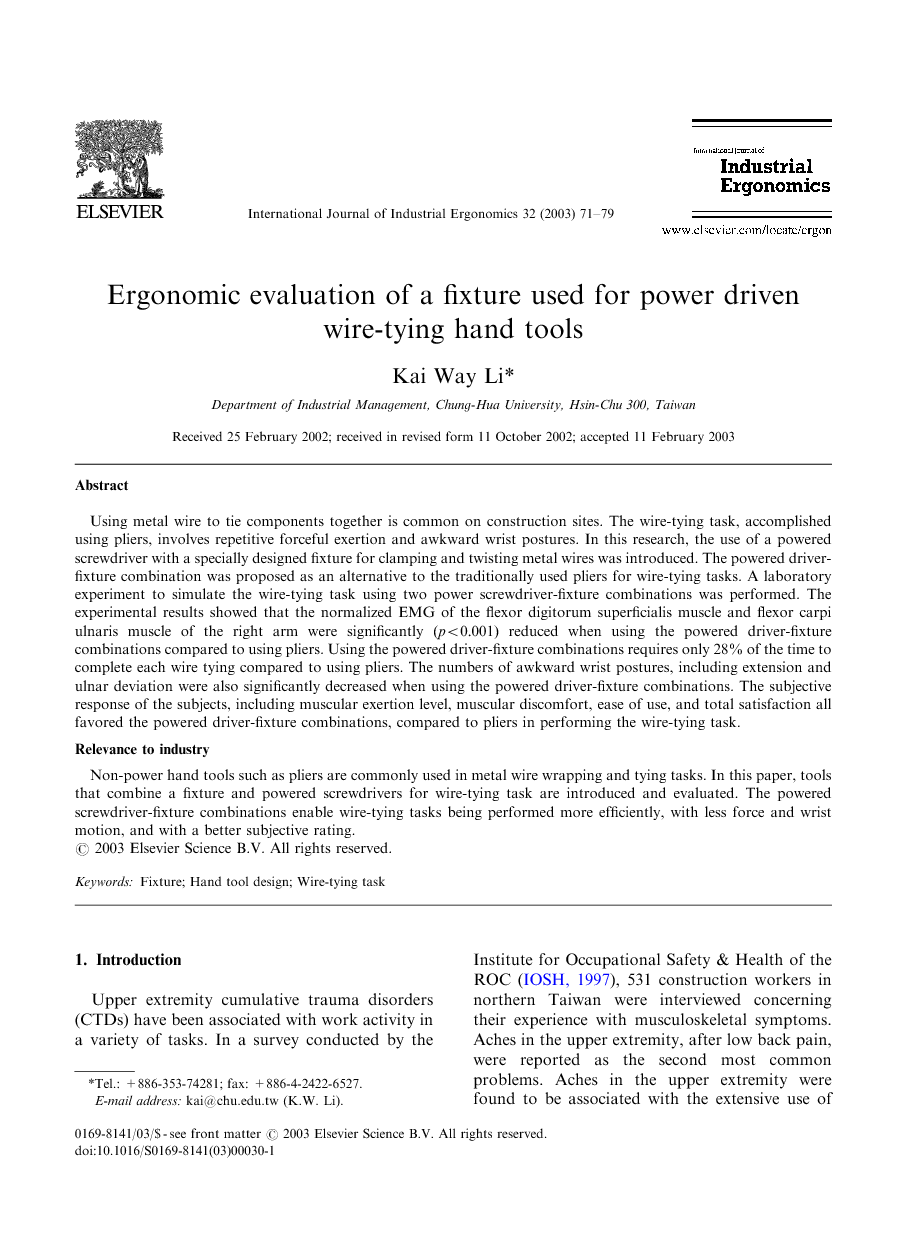 Upper extremity cumulative trauma disorders (CTDs) have been associated with work activity in a variety of tasks. In a survey conducted by the Institute for Occupational Safety & Health of the ROC (IOSH, 1997), 531 construction workers in northern Taiwan were interviewed concerning their experience with musculoskeletal symptoms. Aches in the upper extremity, after low back pain, were reported as the second most common problems. Aches in the upper extremity were found to be associated with the extensive use of hand tools and/or awkward working postures. Seventy four percent of the interviewees reported that they used hand tools to accomplish their tasks. Among them, 57% reported that they had experienced aches in the upper extremity in the past 12 months. Awkward postures, excessive muscular force and high rates of manual repetition are recognized as key ergonomic CTDs risk factors in the literature (Armstrong et al., 1986; Putz-Anderson, 1988; Muggleton et al., 1999; Silverstein et al., 1986; Moore and Garg, 1994). The design/redesign of hand tools is an essential issue in the reduction of hand/wrist discomfort and injuries (Myers and Trent, 1988; Putz-Anderson, 1988; Cobb et al., 1996; Killough and Crumpton, 1996; Muggleton et al., 1999; Lee and Jiang, 1999). Pliers are the most commonly used non-powered hand tools by construction workers (IOSH, 1997). They are normally used in cutting wires and tying components together. Pliers are cheap and easy to use but are not specifically designed for repetitive use in the wire-tying task. When tying wire, the wire must be clamped and twisted. Twisting wires cannot be completed without the repetition of awkward hand/wrist postures, such as wrist extension and ulnar deviation together with the supination and pronation of the forearm. In another study (Li, 2002), the author designed a wire-tying hand tool for the wire-tying task. This tool consisted of a fixture, a rotational mechanism with a hand crank, and a handle. In fact, the fixture may also be attached to a powered screwdriver to twist the metal wires. The aim of this study was to evaluate the use of the fixture, designed in the former study (Li, 2002), on power driven screwdrivers for tying wire. The purpose was to reduce the muscular effort of the forearm when tying metal wire. Reduction of repetitive awkward hand/wrist motions such as ulnar deviation, flexion, extension, pronation and supination of the hand/arm when using a hand tool in tying the wire were also desired.

This study showed that the wire-tying task, which is normally performed using pliers, could be accomplished using a power screwdriver if a proper fixture for clamping the metal wires could be designed. Replacement of pliers by a power driver-fixture assembly to tie metal wires has a number of benefits: reduced muscular effort, less performance time, reduced repetitive wrist motion and better user ratings.