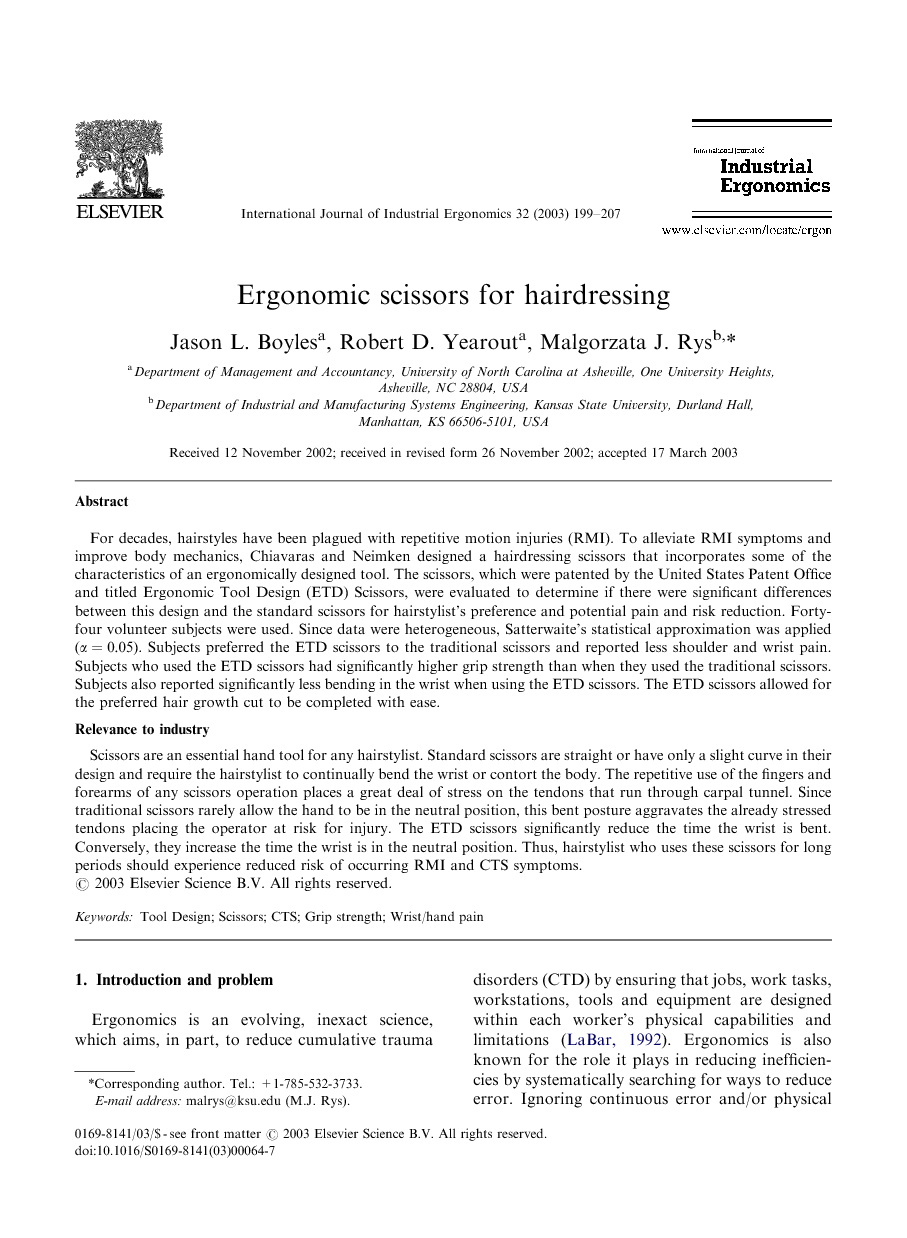 For decades, hairstyles have been plagued with repetitive motion injuries (RMI). To alleviate RMI symptoms and improve body mechanics, Chiavaras and Neimken designed a hairdressing scissors that incorporates some of the characteristics of an ergonomically designed tool. The scissors, which were patented by the United States Patent Office and titled Ergonomic Tool Design (ETD) Scissors, were evaluated to determine if there were significant differences between this design and the standard scissors for hairstylist's preference and potential pain and risk reduction. Forty-four volunteer subjects were used. Since data were heterogeneous, Satterwaite's statistical approximation was applied (α=0.05). Subjects preferred the ETD scissors to the traditional scissors and reported less shoulder and wrist pain. Subjects who used the ETD scissors had significantly higher grip strength than when they used the traditional scissors. Subjects also reported significantly less bending in the wrist when using the ETD scissors. The ETD scissors allowed for the preferred hair growth cut to be completed with ease. Relevance to industry Scissors are an essential hand tool for any hairstylist. Standard scissors are straight or have only a slight curve in their design and require the hairstylist to continually bend the wrist or contort the body. The repetitive use of the fingers and forearms of any scissors operation places a great deal of stress on the tendons that run through carpal tunnel. Since traditional scissors rarely allow the hand to be in the neutral position, this bent posture aggravates the already stressed tendons placing the operator at risk for injury. The ETD scissors significantly reduce the time the wrist is bent. Conversely, they increase the time the wrist is in the neutral position. Thus, hairstylist who

Ergonomics is an evolving, inexact science, which aims, in part, to reduce cumulative trauma disorders (CTD) by ensuring that jobs, work tasks, workstations, tools and equipment are designed within each worker's physical capabilities and limitations (LaBar, 1992). Ergonomics is also known for the role it plays in reducing inefficiencies by systematically searching for ways to reduce error. Ignoring continuous error and/or physical stress can cause trauma disorders such as repetitive motion injuries (RMI). A common RMI symptom reported today is carpal tunnel syndrome (CTS). CTS also has been labeled occupational overuse syndrome or repetitive strain (Konz and Johnson, 2000). While these conditions have always been with the workforce, it was not until the past 20 years that the effects of computer keyboards and their repetitive actions from key stroking caused a major concern about CTS. CTS is caused by compression of the median nerve, which passes through the carpal tunnel in the wrists (Jackson et al., 1995). This compression occurs when the size of the tunnel is reduced by wrist deviation of the finger flexor tendons, which also pass through this area (Storti, 1990). Symptoms include pain, numbness, tingling, clumsiness and lack of sweating in parts of the hand innervated by the median nerve. These symptoms may be felt spontaneously rather than constantly, with the majority of severe symptoms experienced during the night (Storti, 1990). Although both genders are susceptible to CTS, smaller wrist dimensions, increased retention of body fluids, menstrual cycles, pregnancy, and breast-feeding contribute to an increased susceptibility among women (Konz, 1990). If left untreated, CTS can result in partial or complete disability of the hand (Greer et al., 1992). Storti (1990) reported that bending the wrist forward 90° (acute volar flexion) resulted in a significant increase in pressure in the median nerve in the wrist. The preponderance of evidence supports recommendations for workers to keep their wrists straight (neutral position) while rotating the forearm and hand. This led Konz and Mital (1990) to suggest guidelines for preventing and alleviating the symptoms associated with CTS in the design of hand tools. Four broad categories were listed as follows: frequency (reduce the number of cycles for a specific wrist), joint angle (keep the wrist in the neutral position), force (reduce the amount of force and its duration) and non-ergonomic (medical). Scissors are an essential hand tool for any hairstylist. Standard scissors are straight or have only a slight curve in their design. These scissors put a great deal of stress on the carpal tunnel because of the repetitive use of the fingers and forearms. Traditional scissors rarely place the hand in its neutral position. The tendency for scissors used by hairstylists to have straight handles may be due to traditional or ease of manufacturing, but nevertheless they are straight (Konz and Streets, 1984). Recently, a hand surgeon (Chiavaras and Neimken, 2000) stated that in treating hairstylists who have been practicing for 5–10 years, almost all of them came in complaining of pain or numbness in the upper extremity of the hand, wrist, and shoulder. In addition to the normal risk factors associated with CTS, most hairdressers are women. Given this demographic attribute, standard scissors design is a contributor to increased exposure to RMI. To alleviate pain in his shoulder, lower back, wrist, and to improve the mechanics of cutting hair, Chuck Chiavaras of Chiavaras Hair Design, in cooperation with hand surgeon Ronald Neimken of Carolina Hand Surgery Associates, Inc., designed and patented a pair of ETD hairstylist scissors (Chiavaras, 2001). These unique scissors were designed with a bend in the handles of 90° (Fig. 1) to ensure an ergonomic advantage by attempting to keep the hand in the neutral (handshake) position (Fig. 2, Fig. 3 and Fig. 4) while cutting hair from any angle. The purpose of the bend is for the scissors to fit the job process. Standard scissors continually take the hand out of the neutral position and torque the rest of the body from the hips to the shoulders (Fig. 2, Fig. 3 and Fig. 4). The intent of the prototype was to adhere to the basic guidelines for hand tool design. Particular attention was paid especially to guidelines #1: ‘use of special-purpose tools’, #2: ‘design tools to be used by either hand’, and #7: ‘consider the angles of the forearm, grip and tool’. In other words put the “bend in the tool and not in the wrist” (Konz and Johnson, 2000). The intent of the design was to allow the hairstylist's wrists to remain in the neutral position and the arm to remain below the shoulder. Note in Fig. 2, Fig. 3 and Fig. 4 that the wrist in the right frame (standard scissors) is bent at almost a 90° where in the left frame (ETD scissors) the wrist is in the neutral position. A pilot study, with 8 subjects, determined that the ETD scissors had the potential to alleviate or relieve RMI symptoms, reduce CTS disease, as well as reduce back pain and fatigue (Boyles et al., 2001). During analysis, the data collection questionnaire was determined to contain sufficient validity and reliability for an expanded study. Subjects used in the pilot study were disqualified for participation in the study discussed in this paper. The purpose of this study was to expand the pilot study with sufficient subjects in order to make statistically significant inferences to the benefits of the ETD scissors where appropriate. A hairdresser will work either for himself or herself or for a salon owner. When working for the salon owner, they generally rent their cubical and equipment with the exception of scissors. Quality of performance is measured in customer satisfaction that is rewarded by gratuities, return appointments, or both. A quality hairdresser's appointment schedule will be full 4–5 weeks in advance. Thus, how many and the quality of haircuts is not a relevant performance criteria. What is of concern for the operator is pain management and customer satisfaction.

This study's results demonstrate that the ETD scissors are an effective tool in reducing perceived pain, deterioration in grip strength, bending the wrist, and reducing the requirement for the hand and wrist to be above the shoulder, thereby significantly reducing the risk of CTS and RMI symptoms. The authors also recommended that the ETD scissors be packaged with soft plastic inserts to allow for better operator fit and to assist in relieving soft-tissue pressure. The inventors should consider modifying their patent in order to gain more universal customer acceptance and extend the life of the current patent.