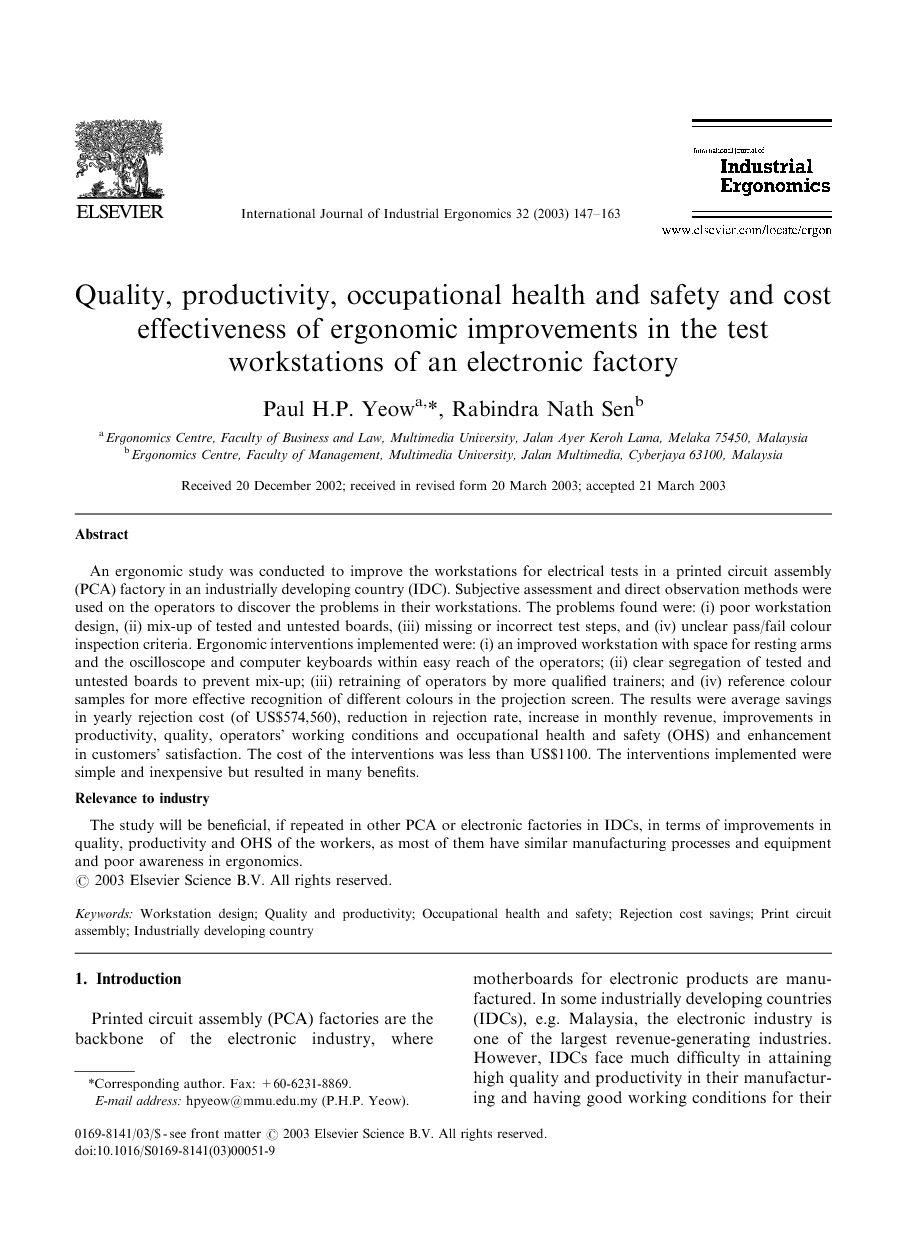 An ergonomic study was conducted to improve the workstations for electrical tests in a printed circuit assembly (PCA) factory in an industrially developing country (IDC). Subjective assessment and direct observation methods were used on the operators to discover the problems in their workstations. The problems found were: (i) poor workstation design, (ii) mix-up of tested and untested boards, (iii) missing or incorrect test steps, and (iv) unclear pass/fail colour inspection criteria. Ergonomic interventions implemented were: (i) an improved workstation with space for resting arms and the oscilloscope and computer keyboards within easy reach of the operators; (ii) clear segregation of tested and untested boards to prevent mix-up; (iii) retraining of operators by more qualified trainers; and (iv) reference colour samples for more effective recognition of different colours in the projection screen. The results were average savings in yearly rejection cost (of US$574,560), reduction in rejection rate, increase in monthly revenue, improvements in productivity, quality, operators’ working conditions and occupational health and safety (OHS) and enhancement in customers’ satisfaction. The cost of the interventions was less than US$1100. The interventions implemented were simple and inexpensive but resulted in many benefits. Relevance to industry The study will be beneficial, if repeated in other PCA or electronic factories in IDCs, in terms of improvements in quality, productivity and OHS of the workers, as most of them have similar manufacturing processes and equipment and poor awareness in ergonomics.

Printed circuit assembly (PCA) factories are the backbone of the electronic industry, where motherboards for electronic products are manufactured. In some industrially developing countries (IDCs), e.g. Malaysia, the electronic industry is one of the largest revenue-generating industries. However, IDCs face much difficulty in attaining high quality and productivity in their manufacturing and having good working conditions for their workers at low cost so that they can compete in the global market (Sen (1984) and Sen (1998)). Ergonomics is known to be the solution to these problems as many have done ergonomic studies in industrially advanced countries (IACs) and found improvements in quality, productivity and occupational health and safety (OHS) and cost reductions (Burri and Helander, 1991; Helander and Burri, 1995; Corlett, 1999; Abrahamsson, 2000). Nevertheless, to our knowledge, there were only a few ergonomic studies conducted in IDCs in the PCA factories (Sen and Yeow (1999), Sen and Yeow (2001), Sen and Yeow (2003a), Sen and Yeow (2003b) and Sen and Yeow (2003c); Yeow and Sen (1999a), Yeow and Sen (1999b), Yeow and Sen (2000) and Yeow and Sen (2002)) and none in the workstation for electrical tests (WETs). Therefore, this paper presents an ergonomic study of the WETs in a PCA factory in an IDC. Quality, productivity and rejection costs of the workstations and OHS of the workers were studied and improvements were made. Burri and Helander (1991) and Helander and Burri (1995) did ergonomic studies of the printed circuit board (PCB) and copier machines factories but no ergonomic interventions in the WETs were included. However, there were some ergonomic studies related to workstation design. Quinn et al. (1991) researched into Ford's packaging workstations for automotive component parts and found there were risks in causing wrist and back injury. Similarly, Mossink (1990) researched into the packaging workstations in a tobacco factory and found operators complaining about low-back pain and pain in the arms and shoulders. This study was conducted in a medium-sized factory in Malaysia that manufacture motherboards for computer projectors. The preliminary results of the study were presented in Yeow and Sen (2000) and Yeow and Sen (2002). The final results are presented in this paper. 1.1. PCA manufacturing processes For a better understanding of the ergonomic interventions, the manufacturing processes in the PCA factory are described as follows: (i) Component preparation process: The raw materials such as the electronic components and the PCB are prepared. The leads of the components are cut to the right length and formed into the right shape. (ii) Surface-mounted technology component placement process: The surface-mounted electronic components are placed and soldered to the PCB. (iii) Manual component insertion process: The leaded electronic components are inserted and soldered to the board. (iv) Manual visual inspection process: The board passes through a series of visual inspections to check for poor solder joints and error in component mountings or insertions. (v) In-circuit electrical test (ICET) process: The components on the board are tested individually. (vi) Functional electrical tests (FCT) process: The board is tested for its overall function. (vii) Quality assurance process: The completed board is visually inspected again and packed. Since this study is focused on the WETs, the ICET and FCT processes are elaborated. 1.2. In-circuit electrical test In the ICET process, the operator at the WETs puts the PCA board one at a time into an ICET fixture which has many pins. The operator then presses a button which would lift up the pins to probe the various electrical points of the board. The pins are connected to a computerised tester, named Teradyne or HP3070, which is used to test any wrong component value and poor connection. 1.3. Functional electrical tests This process is done in different WETs from that of the ICET. PCA boards are loaded one at a time into the FCT fixture. Many different testing procedures are carried out for the various types of products. For example, in the power-up test, the current switch is turned on and the operator visually inspects the indicator light. The following are more complicated tests: (i) Wave form test where a series of locations on the PCA board are probed and the operator checks the oscilloscope screen for the correct wave patterns (please see Fig. 1). (ii) Code checking where a series of keys is punched on a keyboard, and in the end, the operator checks the display for a certain code number. (iii) Projection test where the operator turns on the projector, projects an image to a screen and checks the image and colours of the projection. (iv) Print test where a hardcopy is printed and the operator checks the image and lines of the hardcopy.

As shown in this study, ergonomic interventions in the WETs were good investments. These interventions were inexpensive. Nevertheless, they resulted in many benefits in terms of improvements in quality, productivity and OHS, reduction in rejection cost and increase in revenue. The results of this study are useful for the electronic industry because most PCA factories have similar manufacturing equipment and processes. For example, most of their WETs use in-circuit testers, test fixtures and trays. Thus, we recommend that similar ergonomic improvement studies be conducted in other PCA factories, especially those in the IDCs with poor ergonomic awareness. Ergonomics can be the solution to their problems of low productivity, poor quality and bad working conditions, and their inability to compete in the world market.