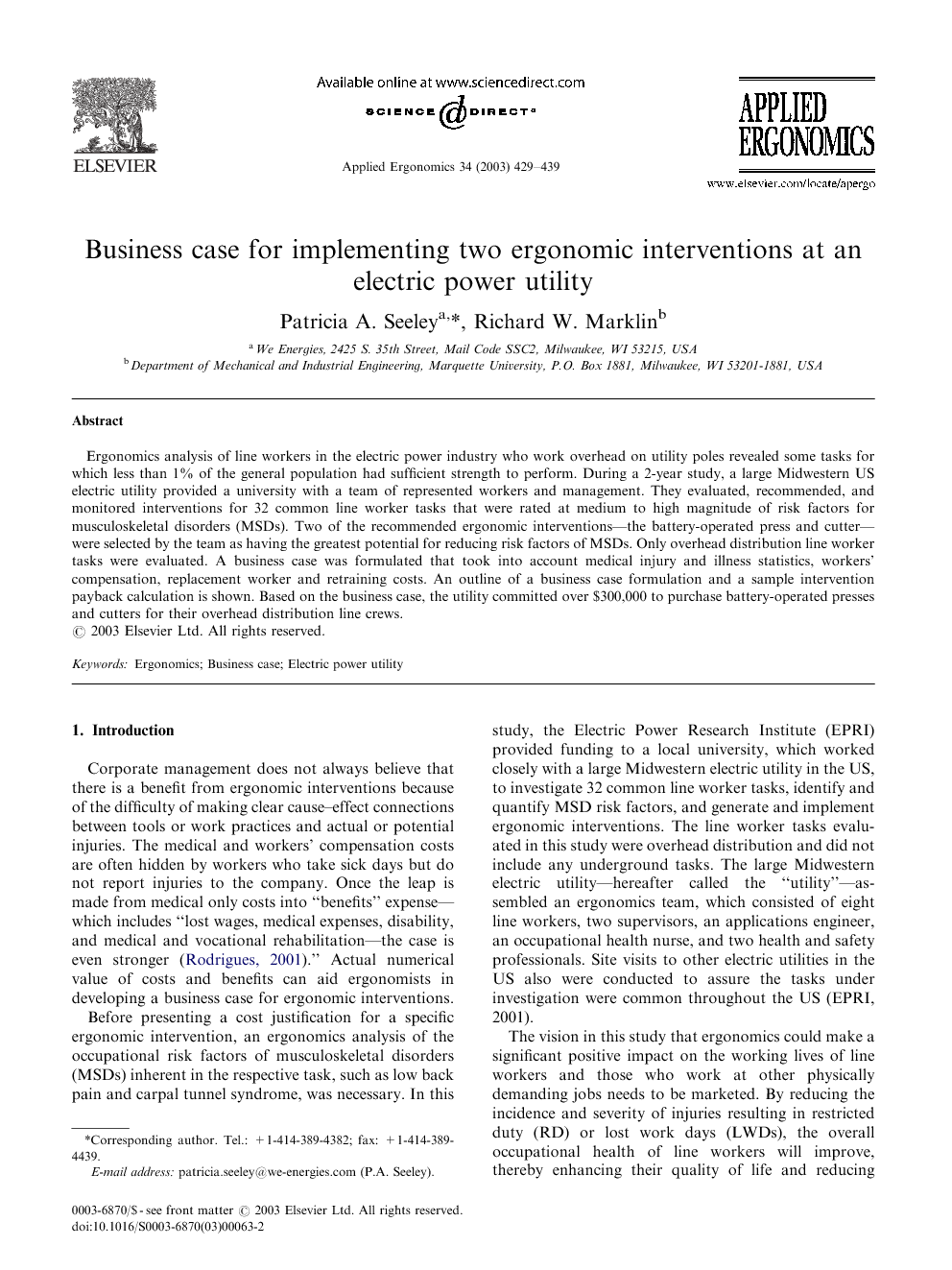 Ergonomics analysis of line workers in the electric power industry who work overhead on utility poles revealed some tasks for which less than 1% of the general population had sufficient strength to perform. During a 2-year study, a large Midwestern US electric utility provided a university with a team of represented workers and management. They evaluated, recommended, and monitored interventions for 32 common line worker tasks that were rated at medium to high magnitude of risk factors for musculoskeletal disorders (MSDs). Two of the recommended ergonomic interventions—the battery-operated press and cutter—were selected by the team as having the greatest potential for reducing risk factors of MSDs. Only overhead distribution line worker tasks were evaluated. A business case was formulated that took into account medical injury and illness statistics, workers’ compensation, replacement worker and retraining costs. An outline of a business case formulation and a sample intervention payback calculation is shown. Based on the business case, the utility committed over $300,000 to purchase battery-operated presses and cutters for their overhead distribution line crews.

Corporate management does not always believe that there is a benefit from ergonomic interventions because of the difficulty of making clear cause–effect connections between tools or work practices and actual or potential injuries. The medical and workers’ compensation costs are often hidden by workers who take sick days but do not report injuries to the company. Once the leap is made from medical only costs into “benefits” expense—which includes “lost wages, medical expenses, disability, and medical and vocational rehabilitation—the case is even stronger (Rodrigues, 2001).” Actual numerical value of costs and benefits can aid ergonomists in developing a business case for ergonomic interventions. Before presenting a cost justification for a specific ergonomic intervention, an ergonomics analysis of the occupational risk factors of musculoskeletal disorders (MSDs) inherent in the respective task, such as low back pain and carpal tunnel syndrome, was necessary. In this study, the Electric Power Research Institute (EPRI) provided funding to a local university, which worked closely with a large Midwestern electric utility in the US, to investigate 32 common line worker tasks, identify and quantify MSD risk factors, and generate and implement ergonomic interventions. The line worker tasks evaluated in this study were overhead distribution and did not include any underground tasks. The large Midwestern electric utility—hereafter called the “utility”—assembled an ergonomics team, which consisted of eight line workers, two supervisors, an applications engineer, an occupational health nurse, and two health and safety professionals. Site visits to other electric utilities in the US also were conducted to assure the tasks under investigation were common throughout the US (EPRI, 2001). The vision in this study that ergonomics could make a significant positive impact on the working lives of line workers and those who work at other physically demanding jobs needs to be marketed. By reducing the incidence and severity of injuries resulting in restricted duty (RD) or lost work days (LWDs), the overall occupational health of line workers will improve, thereby enhancing their quality of life and reducing costs to the employer. Prevention of injuries is far more cost-effective than sending people back to work for repeated re-injury, but is often hard to explain and forecast. One way to make the case for ergonomics is to sell efficient energy delivery—including all forms of customer service—as the goal, as opposed to injuries or illnesses that can be viewed as inefficiencies (Slavin, 2001). Such an approach keeps the emphasis on benefits, instead of costs. Many of the 32 recommended ergonomic interventions from this study also save time, from minutes per task to hours; thus, labor savings should be factored into cost justifications. One of the hurdles in selling ergonomics to management is that they see it as high cost, low value. An effective way to sell ergonomics in a company is to implement a few simple success stories of the opposite type, low cost–high value. The positive benefits of these ergonomic interventions then should be communicated widely across the company, and awareness of ergonomics can be promoted by training various levels of workers and management. Nineteen of the 32 tasks investigated by the ergonomics team at the utility were in the category of low cost–high value. However, two of the 32 interventions that the team believed would improve the occupational health of line workers the most—the battery-operated press and the battery-operated cutter—required initial investment of a substantial nature. The business case for the battery-operated press and cutter is provided in this article as a model for safety and health professionals in the electric utility industry.

The payback period for ergonomic interventions was demonstrated to be surprisingly short when the relevant data were collected and interpreted. Health and safety professionals have struggled for years making the case for capital investment of tools that would reduce the magnitude of MSD risk factors. Properly documented and packaged, a sound business case could sell itself and aid ergonomists and health professionals in their efforts to improve the occupational health of workers.